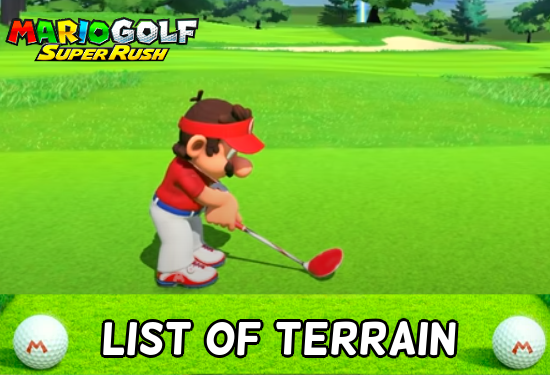 This is a list of all Terrain found in Mario Golf: Super Rush. Learn more about the types of terrain you will encounter as well as their effects and features below! 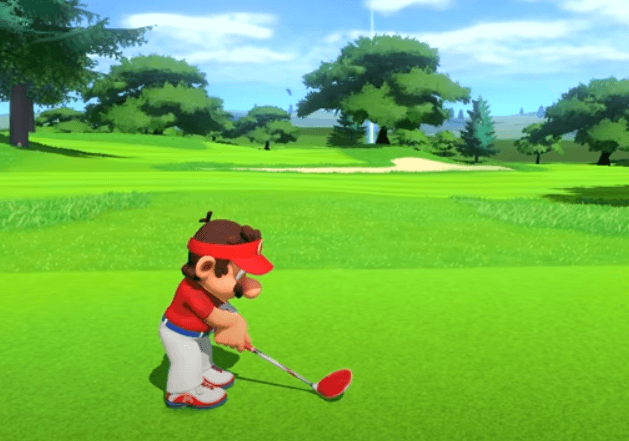 The Fairway is the area that stretches between the tee box (teeing area) and the Green. The grass here is kept short, making shots easy to hit. It's important to always aim for the Fairway to minimize difficulty in hitting the next shot. 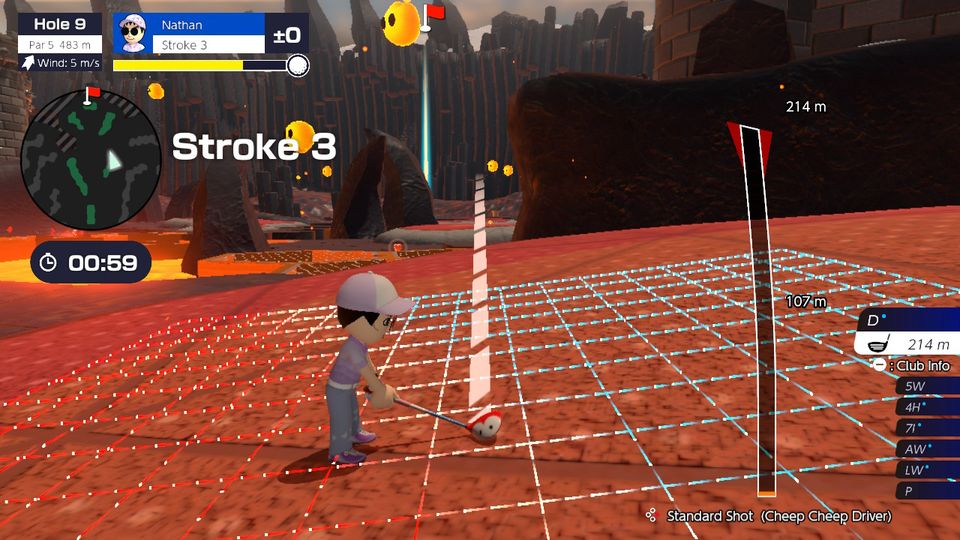 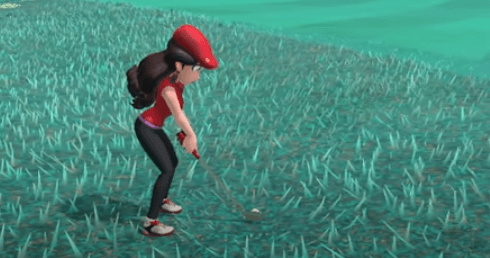 The Rough is generally the area that surrounds the Fairway. The grass in these areas are much taller than the grass found in Fairways, providing resistance against your shots as well as hindering your run speed.

The safe zone for the shot gauge when playing from Rough areas is smaller, making shot accuracy more difficult to control. You'll want to drive your shots out of these areas and into the Fairway or Green to make your next shots easier. 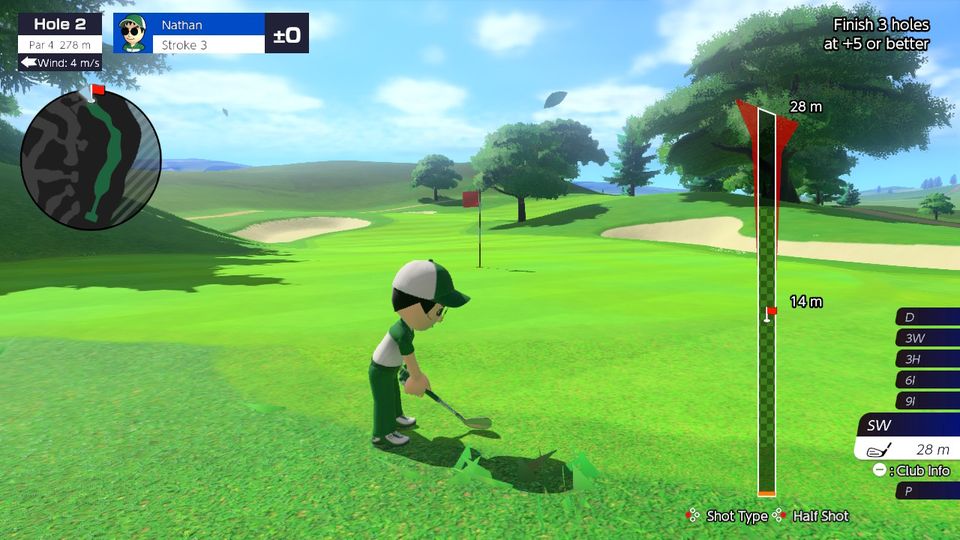 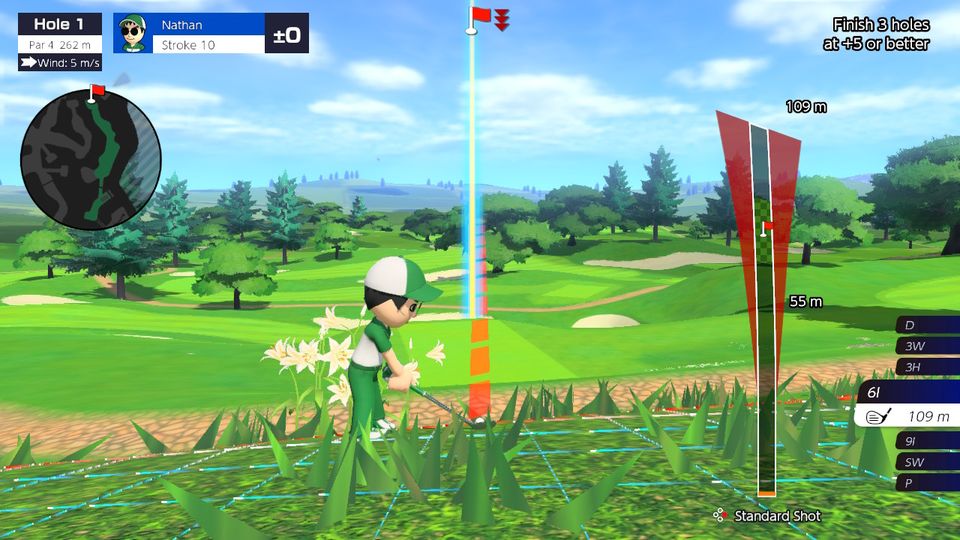 The Deep Rough are several areas where the grass grows even taller than in Rough areas. Shots made from the Deep Rough have a significantly increased Risk Zone, making shots very difficult to control. They also significantly reduce run speed for players. 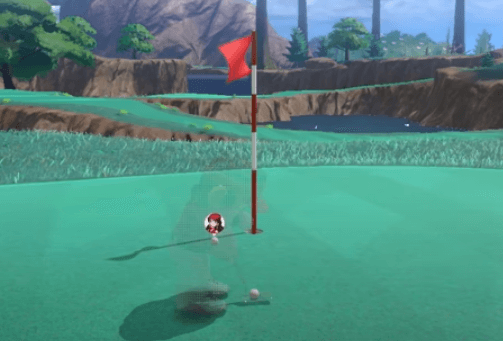 The Green is the area that surrounds the hole. The grass in the Green area is kept very short, which means the ball can travel with little to no resistance along the ground. Given how the hole is always in the Green area, putt shots are recommended to land the ball in the hole. 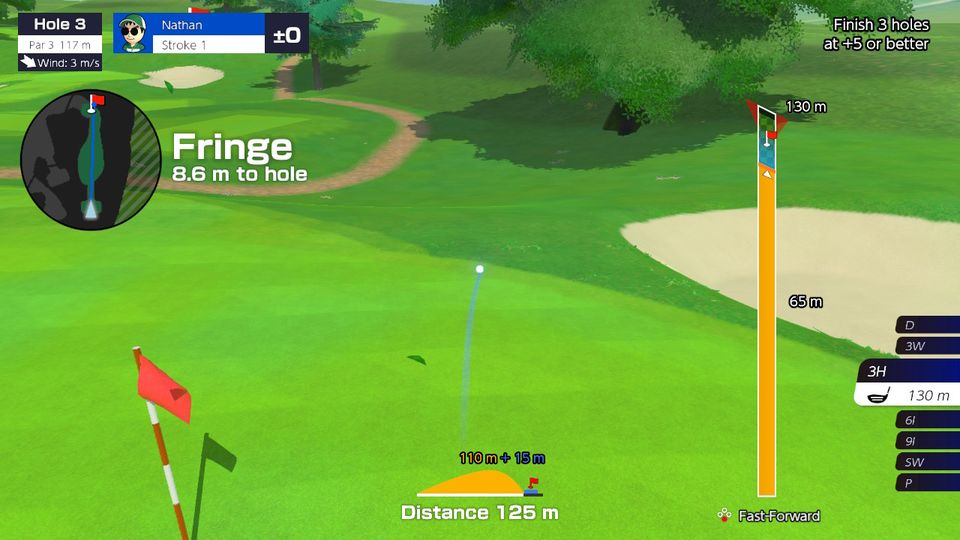 The Fringe is the small border that surrounds the Green area. Similar to the Green, Fringes have very short grass so the ball can travel quite easily. Since the Fringe is located at the edge of the Green area you'll have to use long putts to get the ball into the hole, so plan carefully. 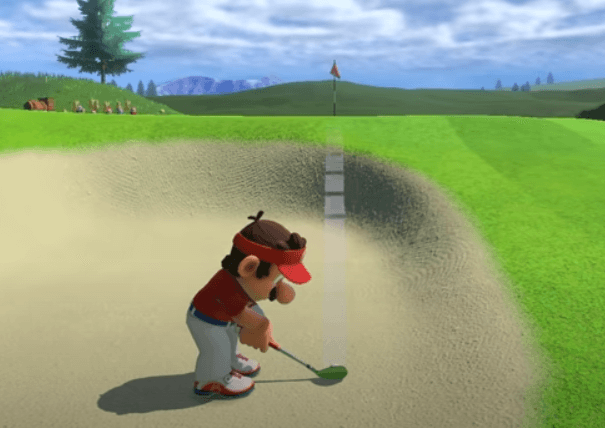 You'll want to avoid having your ball land on a Bunker, but if you do find yourself with your ball in one, use a Wedge club to drive it out of the Bunker. 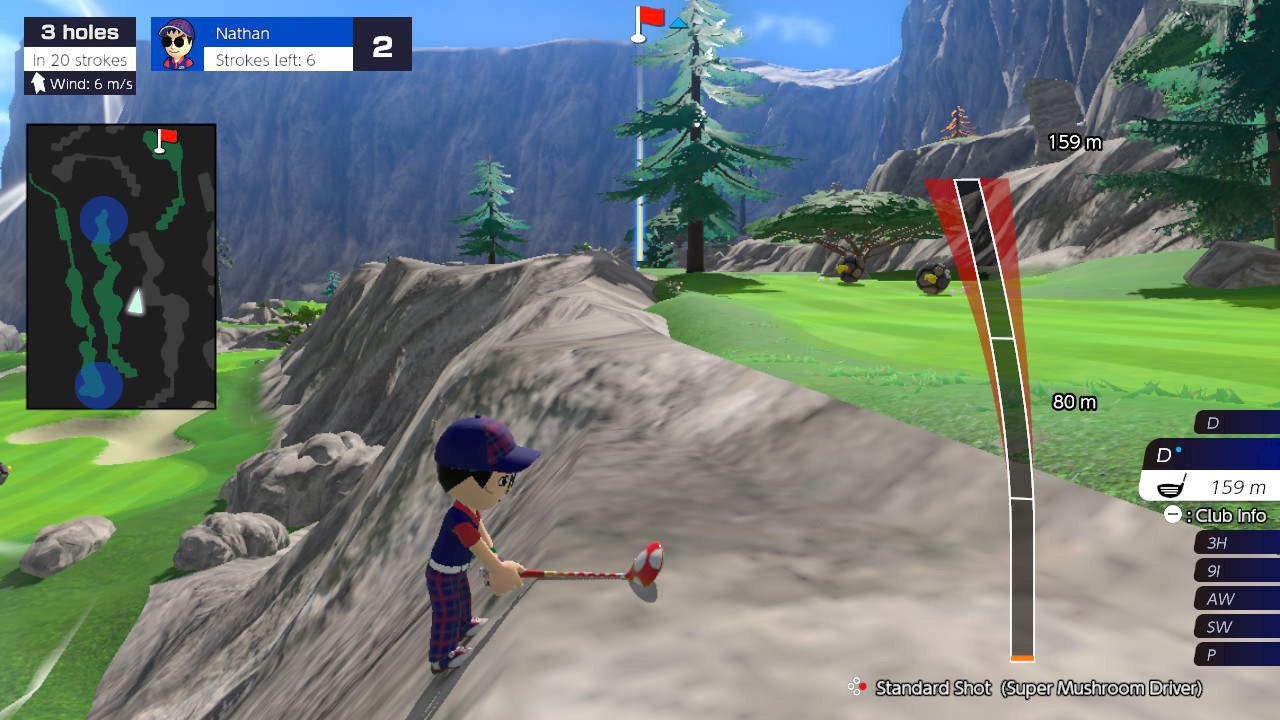 Rocky areas are smooth but uneven terrain that's usually found on cliffs and mountainsides. Shots made on rocky terrain don't have reduced distance, but have significantly increased Risk Zones, making them much more difficult to control. To make matters even more difficult, the uneven sloping on rocky terrain causes the the shot gauge to have a very large curvature, so you'll also have to compensate for that. 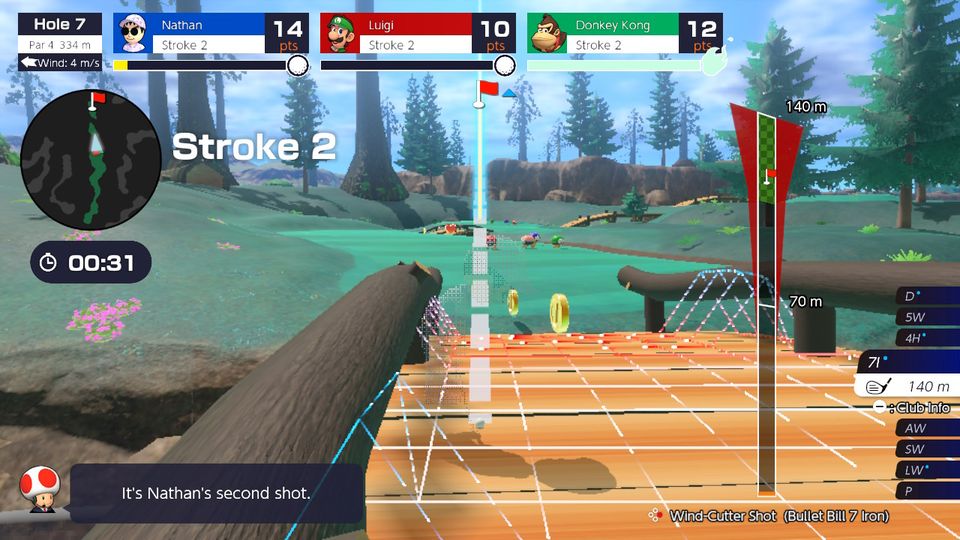 Located on wooden bridges, balls that travel on Wood terrains have a tendency to roll further. On the other hand, shots made from Wood have a noticeably larger Risk Zone comparable to that of Rough areas. 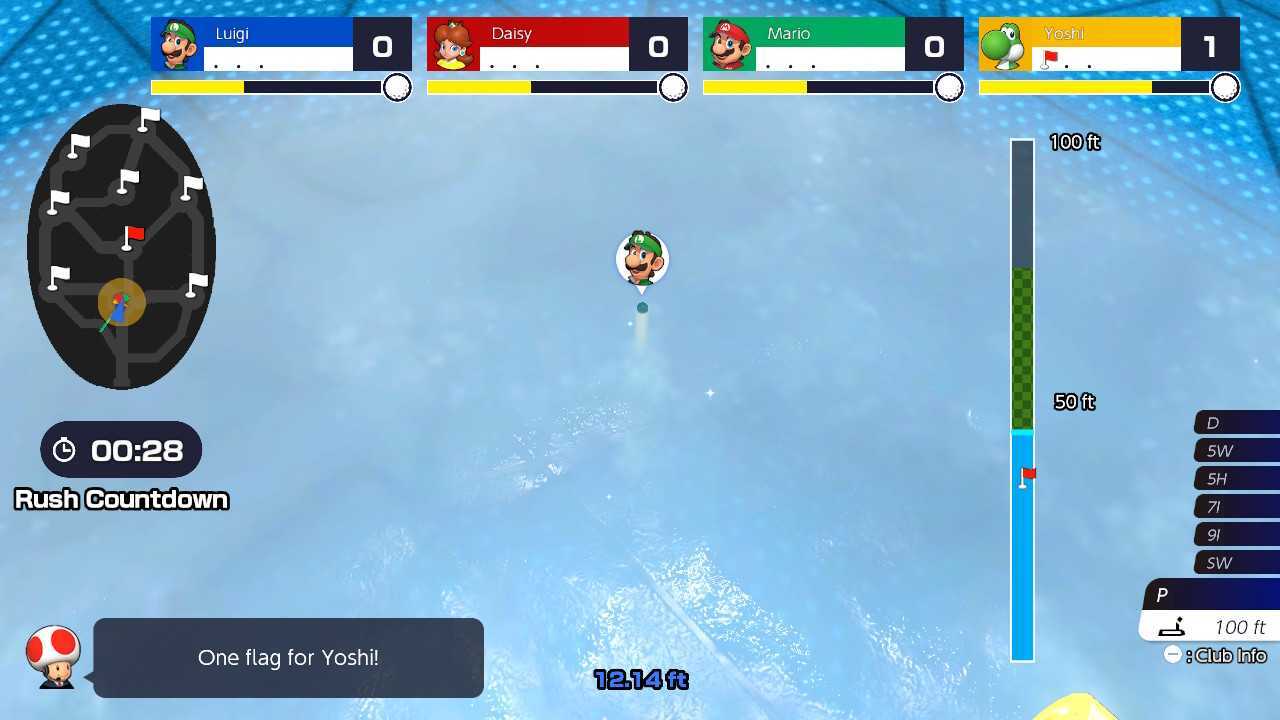 Found in some snowy courses as well as when Luigi uses his Special Shot, balls have increased roll distance when they travel along icy terrain. Players that run through icy terrain will find it difficult to control their running speed and direction.

OB (Out of Bounds) 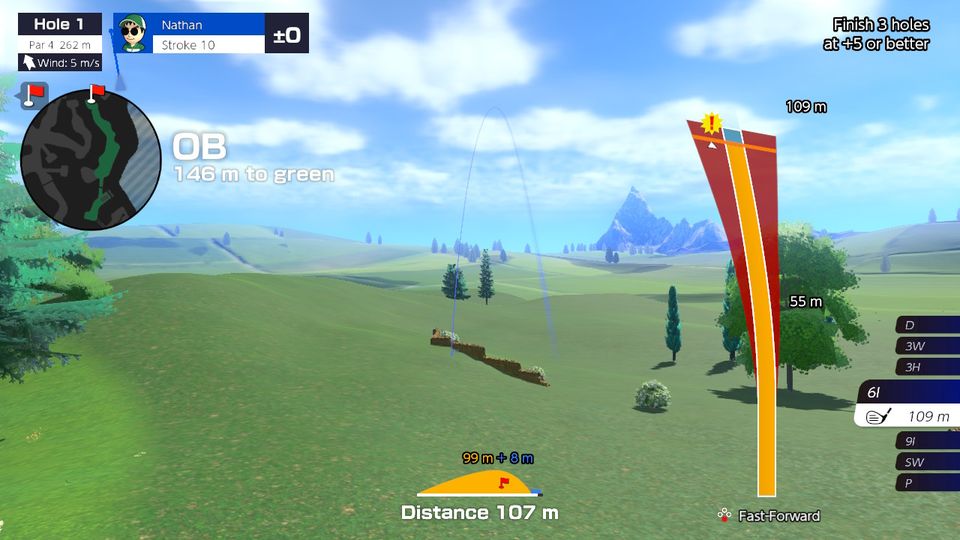 Though not an area you can play out of, your shots can land here if your ball goes beyond the play area of the course. Balls that land here are placed back to their original positions. Additionally, the player who hits an OB shot is penalized with an additional stroke.

Register as a member and get all the information you want. (It's free!)
Login
Opinions about an article or post go here.
Opinions about an article or post
We at Game8 thank you for your support.
In order for us to make the best articles possible, share your corrections, opinions, and thoughts about "Golf Course Terrain Guide" with us!
When reporting a problem, please be as specific as possible in providing details such as what conditions the problem occurred under and what kind of effects it had.