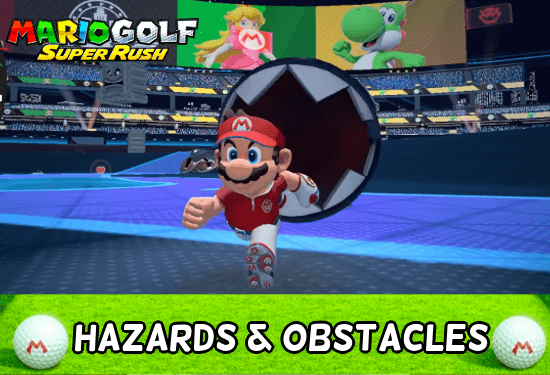 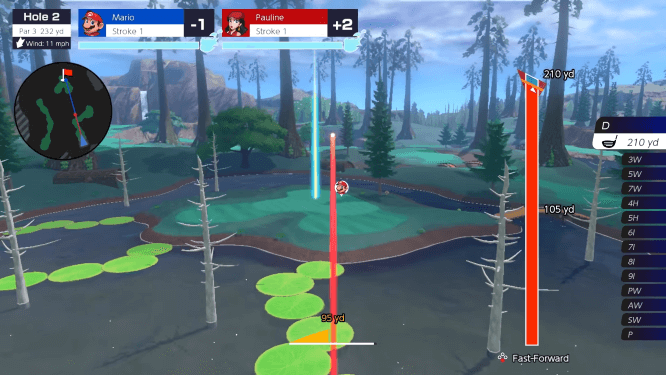 Water is considered a Penalty Area in the game. When a player's ball lands in the water, they will receive a penalty stroke and must reshoot their ball near the edge of the water. Players falling into the water don't receive any penalties, but the time spent falling and getting back up will hurt your score when you're playing a time-based game mode such as Speed Golf. 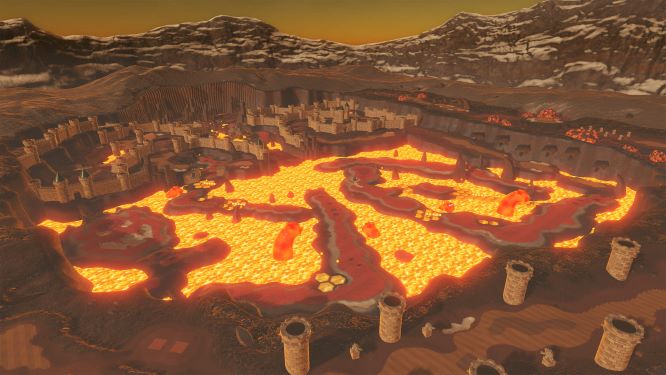 Courses such as the Bowser Highlands will not have water but instead will have pools of lava. Much like landing in the ball in water, landing a ball in lava will result in a penalty stroke. However, similar to water hazards, players who fall into lava don't receive any penalties, but the time spent falling and getting back up will hurt your score in Speed Golf where every second matters. 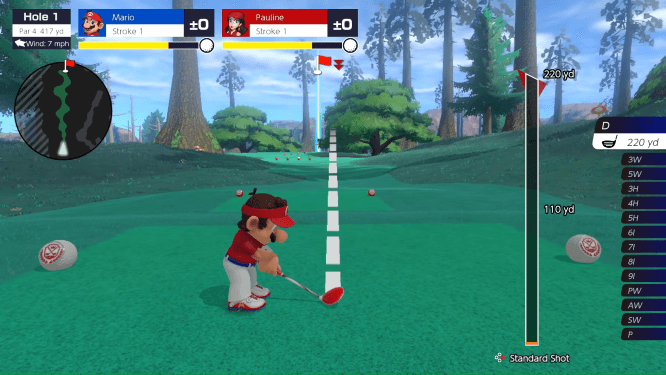 Trees can throw your ball off course if it ends up hitting them. It is best to avoid trees when possible, especially since the area around a tree is usually rough. If your ball gets stuck in the branches of a tree, you will receive a penalty stroke. 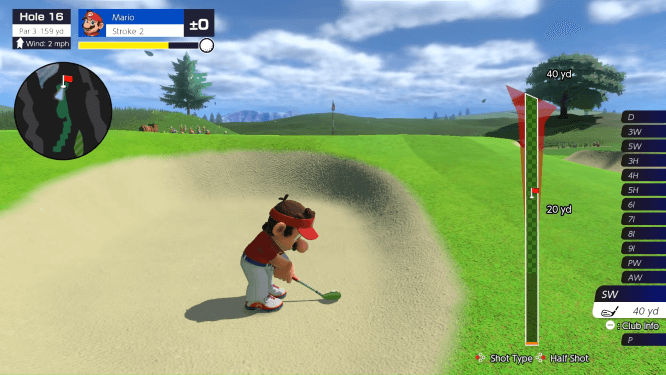 Bunkers and sand traps are a hazard while at the same time a terrain feature in many courses. Though they do not incur a penalty stroke, bunkers make it harder to launch your ball, so it is best to avoid them when possible. 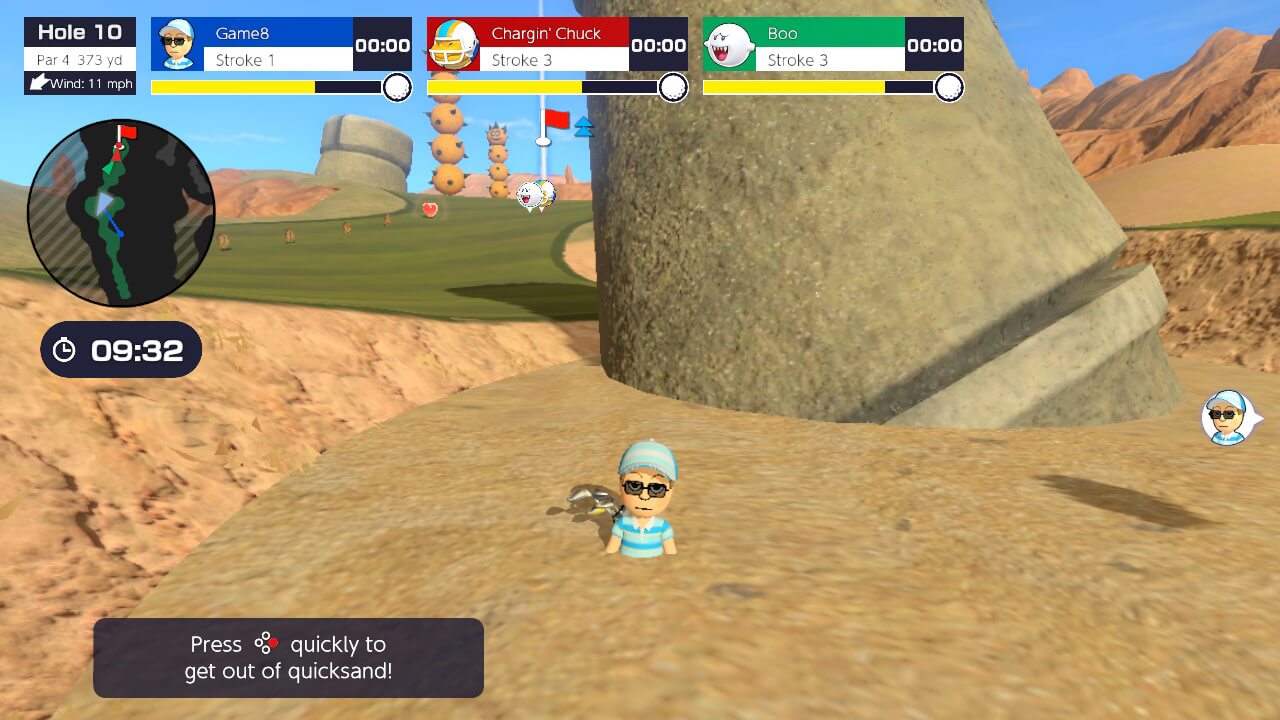 Quicksand can be found all over the Balmy Dunes course and will result in a stroke penalty when your ball lands in it. Additionally, quicksand impedes the players' movement when they walk over it, causing them to sink the longer they stay or move through it.

If you find yourself in quicksand, move quickly to a solid patch of land while rapidly tapping the A Button to avoid sinking as you move. 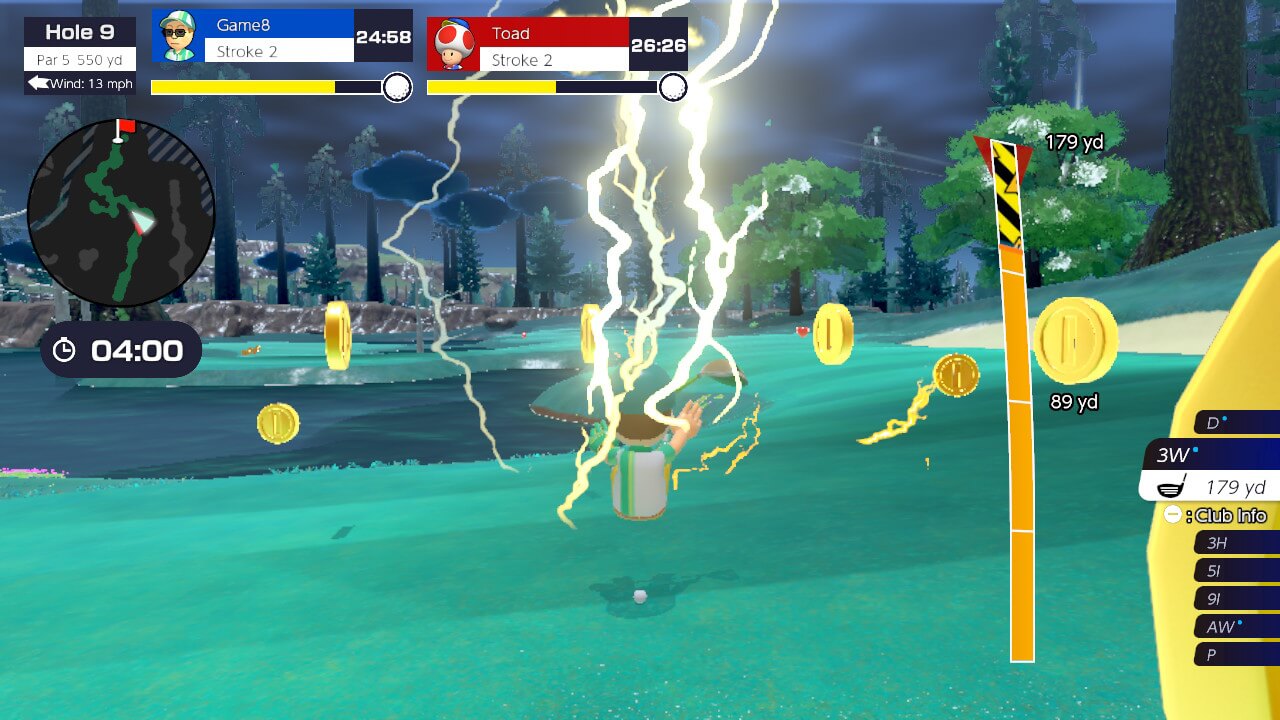 Due to the unpredictable weather of Wildweather Woods, it is the only course where you can experience Lightning Hazards while launching your ball. Landing under thunderclouds makes the upper segment of your power gauge fill with electricity. If you set the power in that range, you will be struck by lightning and lose coins as well as a bit of time. Additionally your shot gauge will become filled with static, making it difficult to read when you're setting the shot power.

To prevent lightning strikes, avoid playing on areas of the course with dark clouds hanging above you. If you have to play from these areas, do not go over the caution-marked section of the shot gauge. 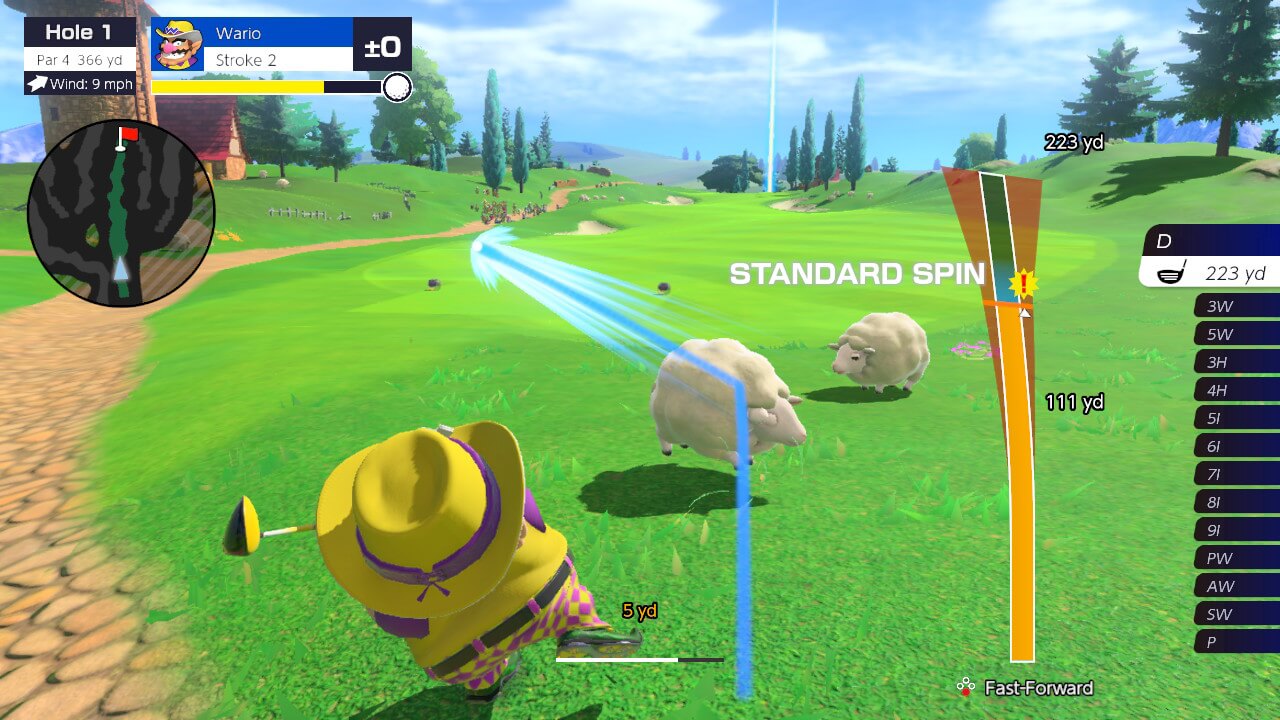 Sheep are present on the rough areas of Bonny Greens. They are stationary creatures and hitting them with your ball will cause the ball to bounce off them. 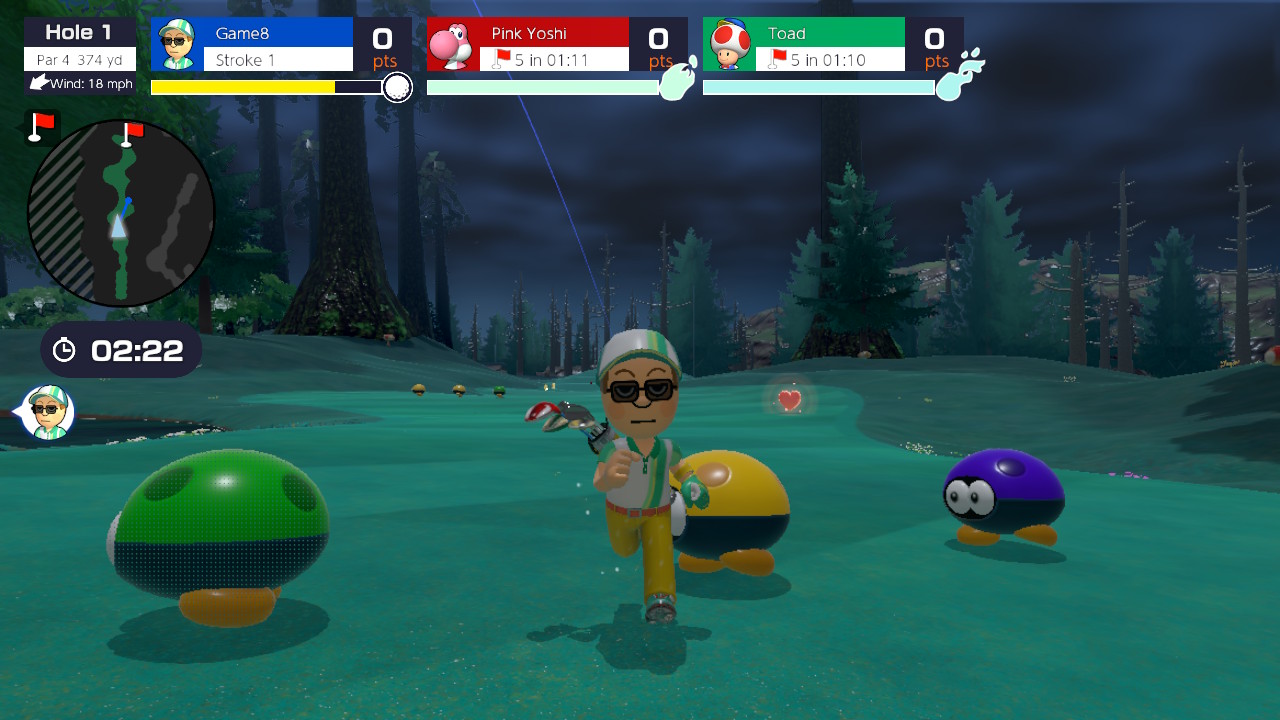 Biddybuds are small ladybug-like creatures that march in a line around the courses of Bonny Greens. Though hitting one of the Biddybuds with your ball will drop a coin, it will also throw your ball off course. Jumping on a Biddybud during Speed Golf will launch you in the direction you landed on the Biddybud. 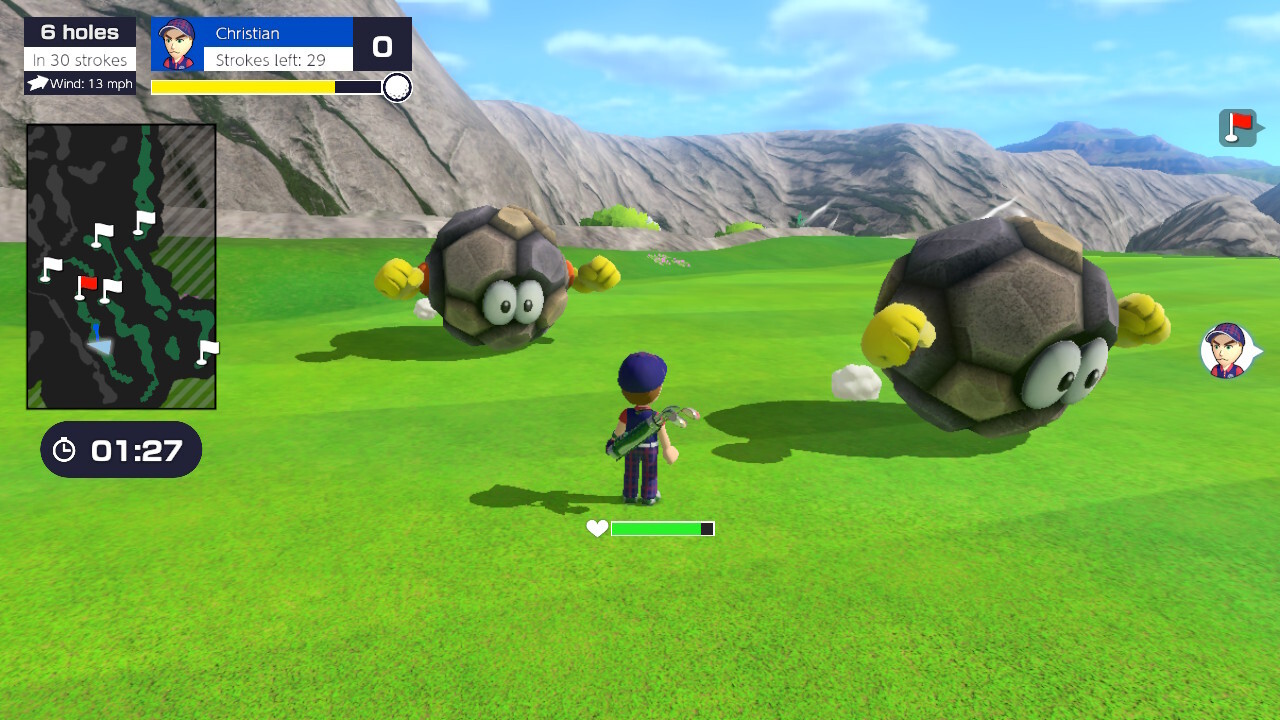 Brolders are boulder-like creatures that are found rolling around Ridgerock Lake. Brolders can knock down players and knock away balls that land on their path.

Be careful that there are no Brolders nearby before you swing. They can roll in front of you and block your ball. Standing in the path of a Brolder as you take your swing will also knock you and your golf ball away. You can destroy Brolders with your Special Dash ability and gain a coin. 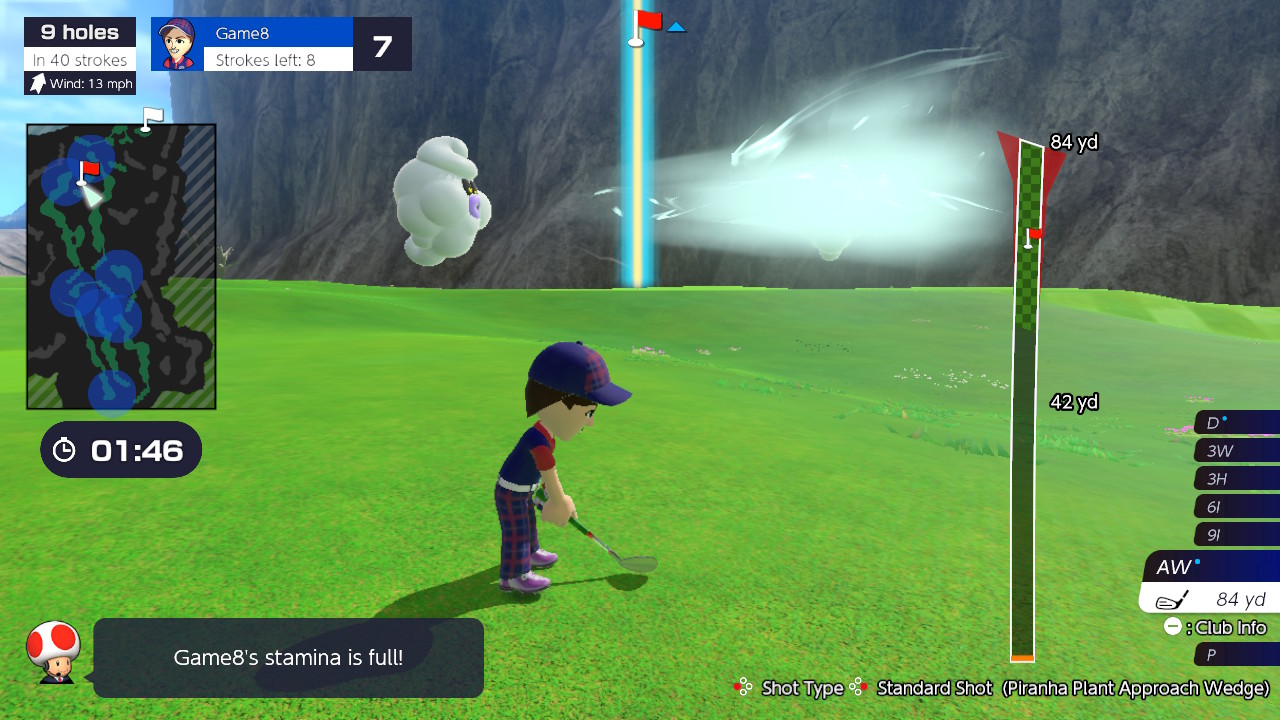 Ty-Foo are large clouds with faces that be found around Ridgerock Lake. They periodically blow wind in one direction, causing your ball to stray from its path if it flies through it. It's best to wait for the Ty-Foo to stop blowing wind before taking your shot, or just avoid them altogether. 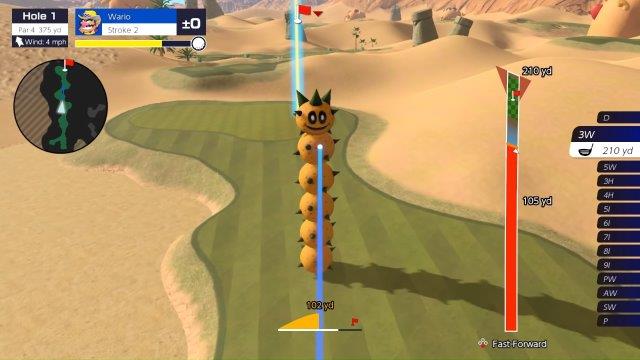 Pokeys are long segmented worms made up of spiked balls. They can be found towering over certain areas of Balmy Dunes. Hitting a Pokey will stop the momentum of your ball and cause its segments to separate and fall to the ground. The fallen segments stay on the course as debris that hinders golf balls and players alike. 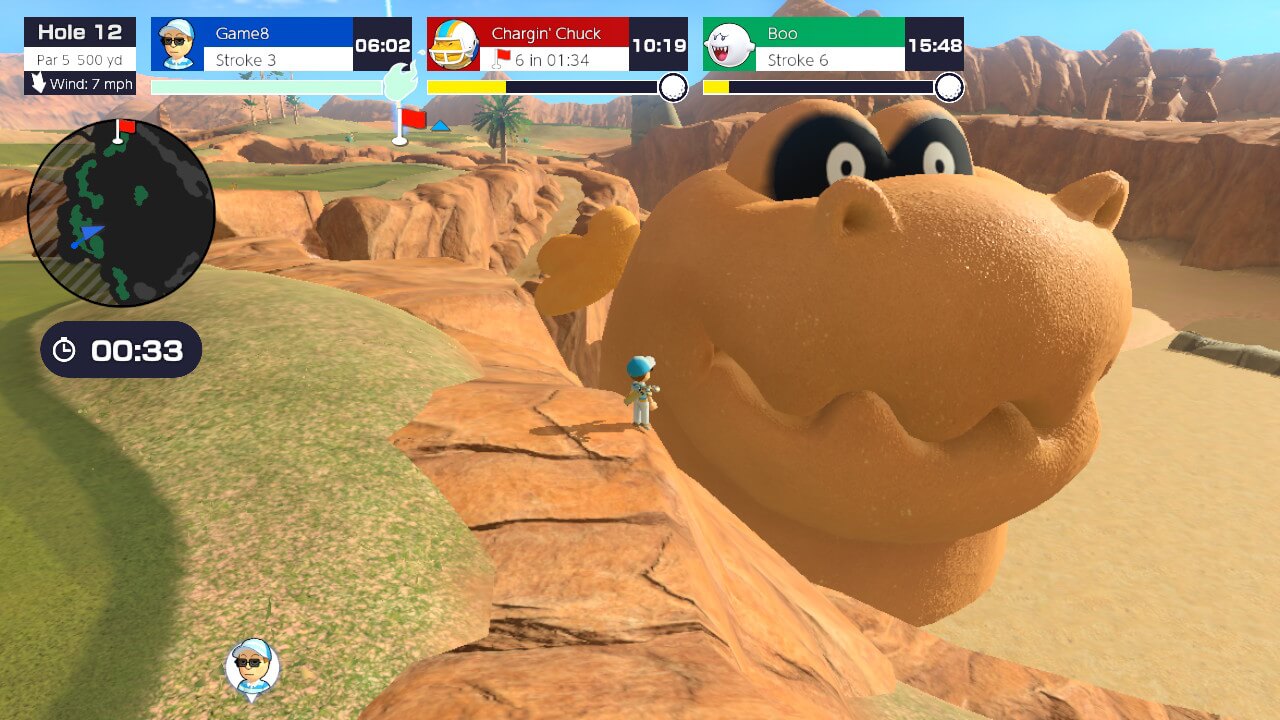 Several Sandmaargh can be found resting on large areas of quicksand in Balmy Dunes. They are giant dragon-like monsters, which function as another large blockade for balls and players. If your ball's path is blocked by a Sandmaargh, try curving your shots around it. 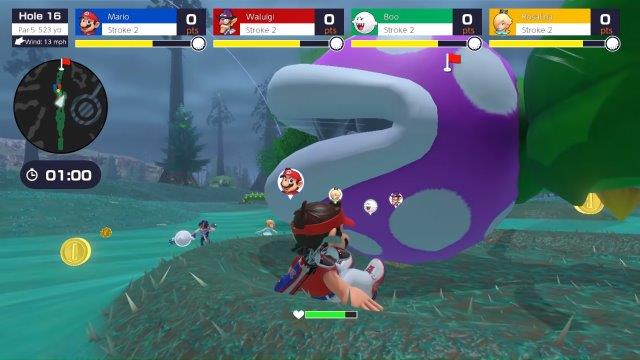 Native to Wildweather Woods, Piranha Creepers are plant-like monsters with sharp teeth and long thorny stems that span a decent length of the course, harming players who touch them as well as blocking golf balls. Try to aim your shots around these Creepers, or use a Lob Shot to go over them. 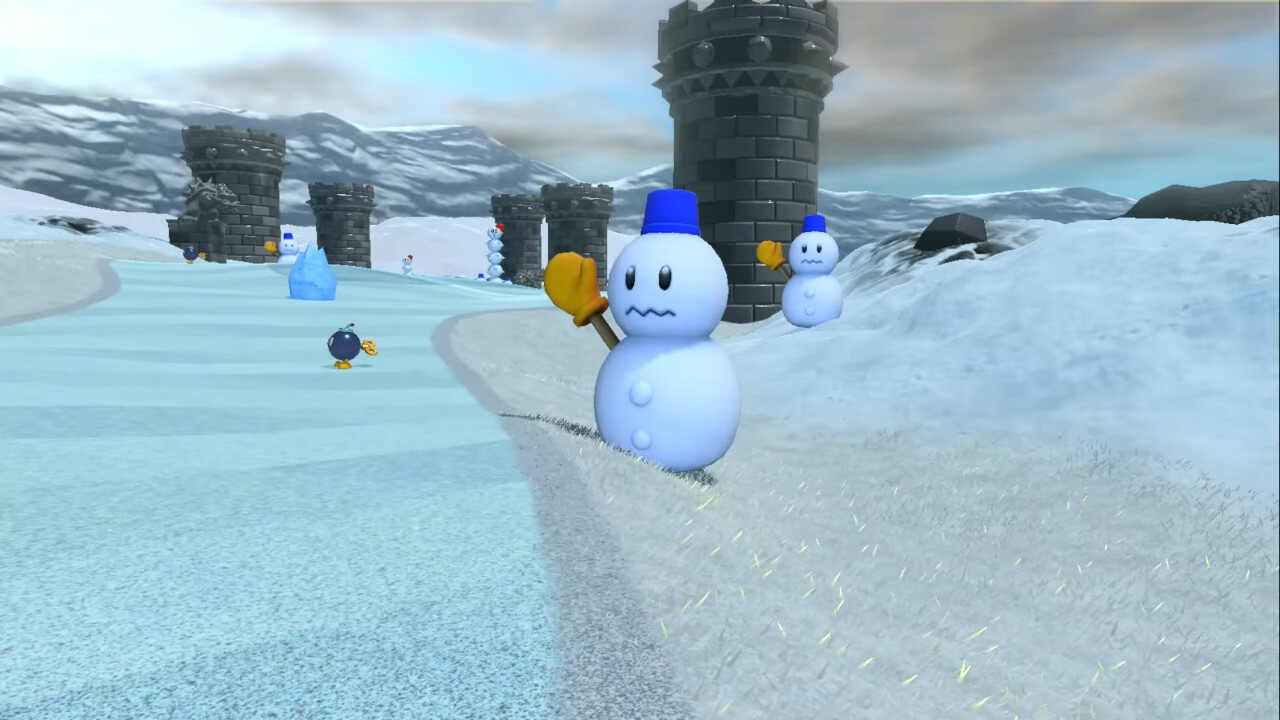 Mr. Blizzards are snowmen that you can only find in the snowy areas of the Bowser Highlands in Golf Adventure Mode. Using their comically large hand, they launch snowballs at you to knock you to the ground when you get too close. Mr. Blizzards can be destroyed by launching a Bob-omb at them. 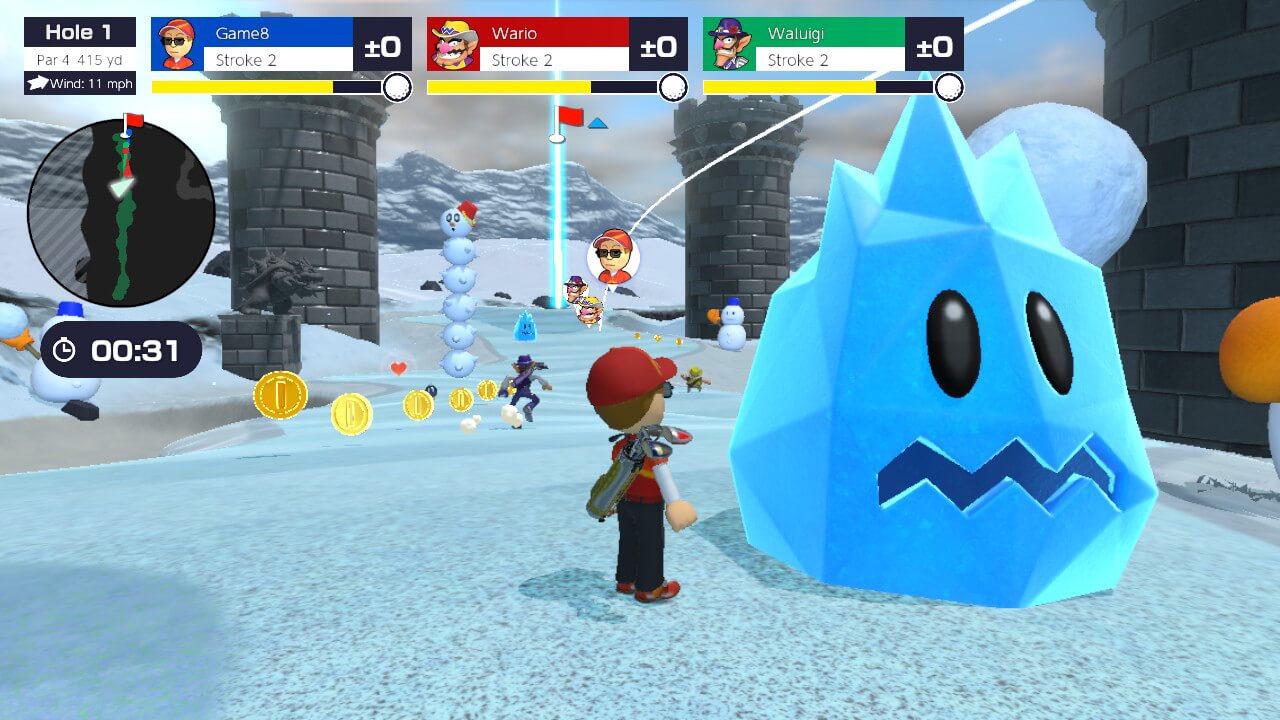 In most snow levels of the Bowser Highlands, Freezies act as a static barricade that block golf balls and knock down players who touch them. Freezies can be destroyed using your Special Dash. Additionally, the Snow King also makes use of them in one of his attacks. 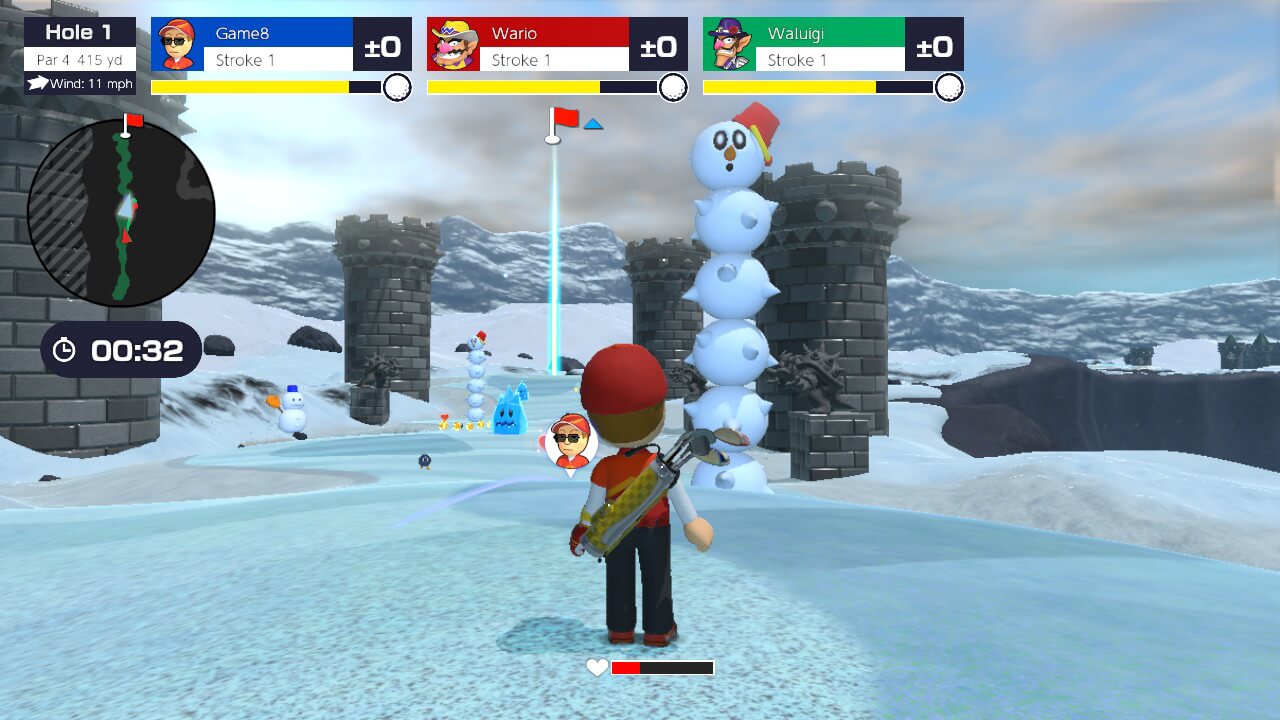 Snow Pokeys are found in most snow levels of the Bowser Highlands and behave the same as their desert counterparts, acting as tall blockades for balls and players. Just like Pokeys, they can be knocked down by either the player or their ball. 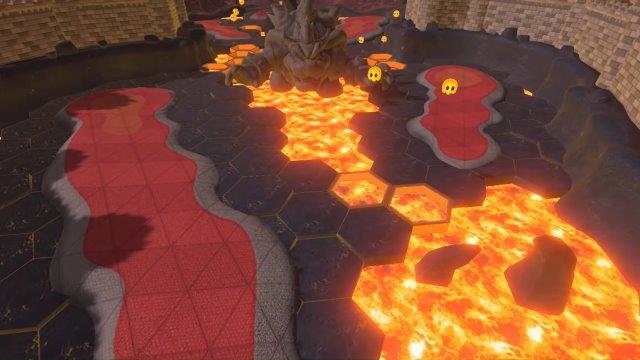 Podoboos are small fireballs that are found throughout Bowser Highlands, jumping in and out of lava pools. Podoboos knock down players who are unfortunate enough to run into them and knock aside golf balls caught in their path. Podoboos only have a small area they jump in and out of, so it's relatively safe to play in areas around them. 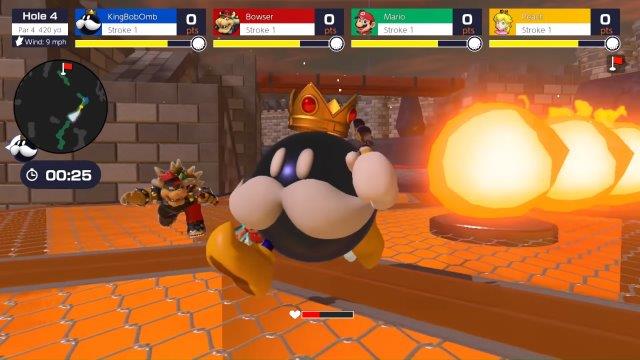 Found in the lava areas of Bowser Highlands, Fire Bars are several balls of fire chained together to form a bar which rotates around a fixed point. Fire Bars push players out of their path as they rotate, making it hard to launch balls if they land near them. If your ball lands near a Fire Bar, you'll have to play quickly to get your ball out of the area before the Fire Bar knocks you away. 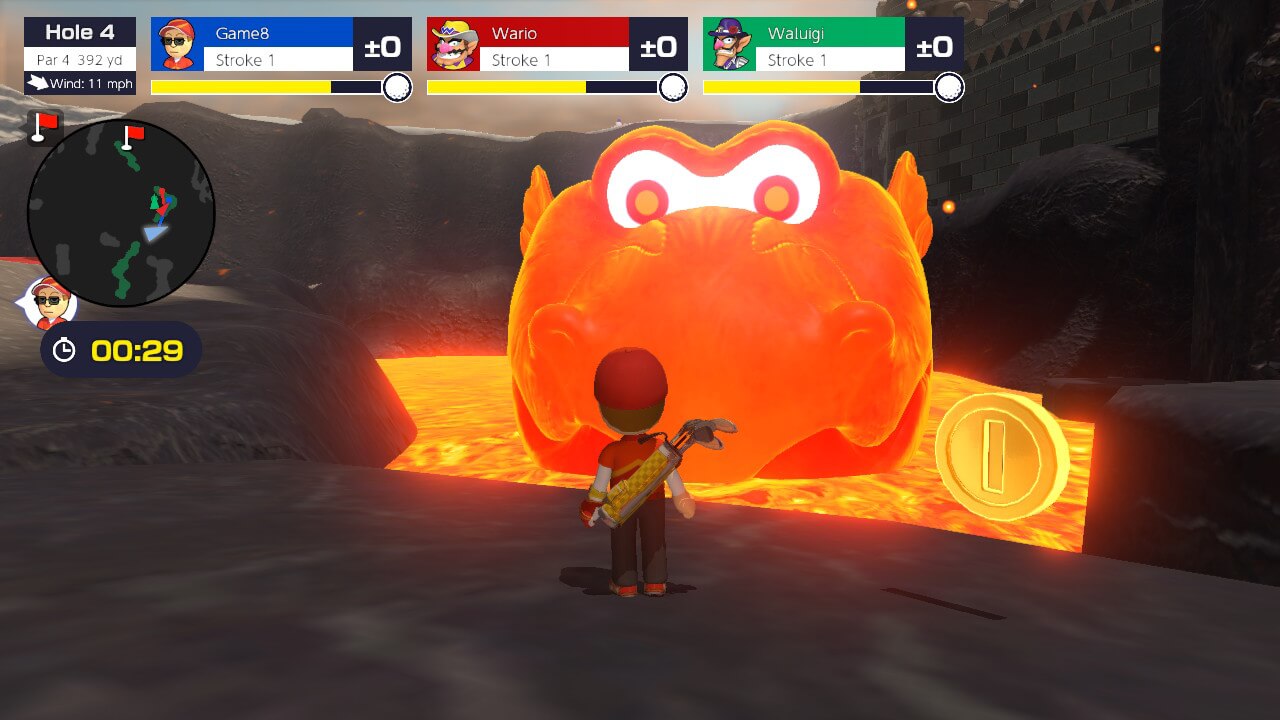 The Charvaargh are giant lava monsters in Bowser Highlands that are similar in appearance to Sandmaargh. They are usually found standing in lava pools and prevent balls from bypassing certain areas of the course. Similarly to the Sandmaargh, you'll want to curve your shots around them if they're in your way. 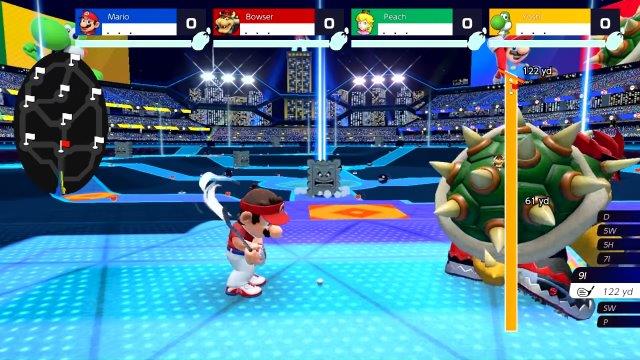 Thwomps are large wall-like obstacles that periodically rise and fall in one designated position of a course. Thwomps can potentially block both balls and players from making their way through to the hole.

Thwomps can be found commonly in Bowser Highlands and the Battle Golf stages. It's best to wait for a Thwomp to fall down before taking your shot as it can be blocked by the Thwomp mid-air. 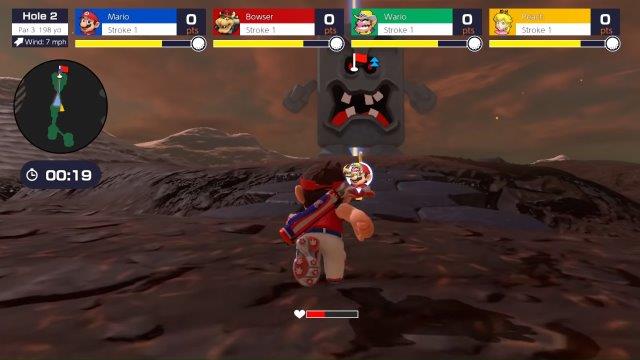 Whomps appear similar to Thwomps, but have arms and legs and do not float in the air. Just like Thwomps they serve as another large blockade for both balls and players, but unlike Thwomps they turn their bodies to face wherever you're standing. Hitting them with a Bob-omb causes them to flinch but will not destroy the Thwomp.

Whomps can be found commonly in Bowser Highlands and the Battle Golf stages. It is best to steer clear of Whomps and instead launch your ball over or curve your ball around it. If your ball does land near a Whomp, you can use a low-trajectory club to pass the ball between its feet. 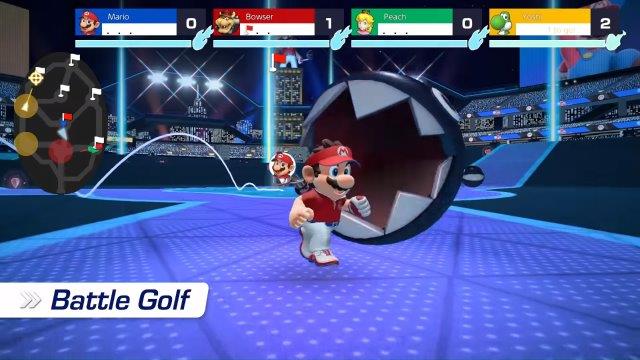 Available in the Super Golf Stadium, Chain Chomps are large teethed wrecking balls attached to a chain and fixed to one spot. If a player or ball gets close enough to the Chain Chomp, it will wake up and attack. A Chain Chomp hitting your ball will also incur a penalty stroke. It's best to avoid areas with Chain Chomps in general. 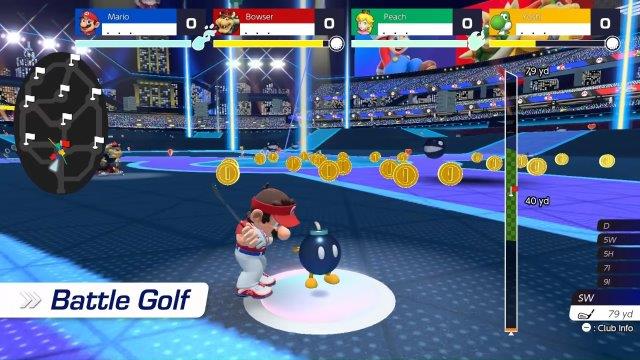 Bob-ombs are small bombs that can be found around the Super Golf Stadium and Bowser Highlands. Hitting a Bob-omb with your golf club will send it flying off in the direction where your opponents are. When they land, they explode and knock back nearby opponents and golf balls. Running into a Bob-omb while dashing or hitting it with your ball will also cause it to explode.

Register as a member and get all the information you want. (It's free!)
Login
Opinions about an article or post go here.
Opinions about an article or post
We at Game8 thank you for your support.
In order for us to make the best articles possible, share your corrections, opinions, and thoughts about "List of All Hazards and Obstacles" with us!
When reporting a problem, please be as specific as possible in providing details such as what conditions the problem occurred under and what kind of effects it had.