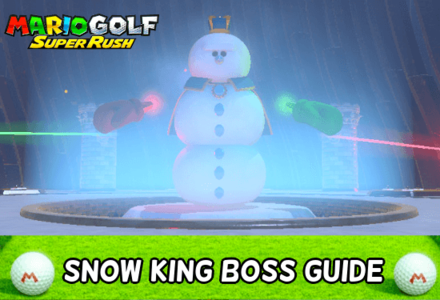 This is a guide to defeating the Snow King in Mario Golf: Super Rush for the Nintendo Switch. Read on to learn about tips and strategies on where to find and how to beat the Snow King, as well as how to get the Platinum Badge.

Where to Find the Snow King 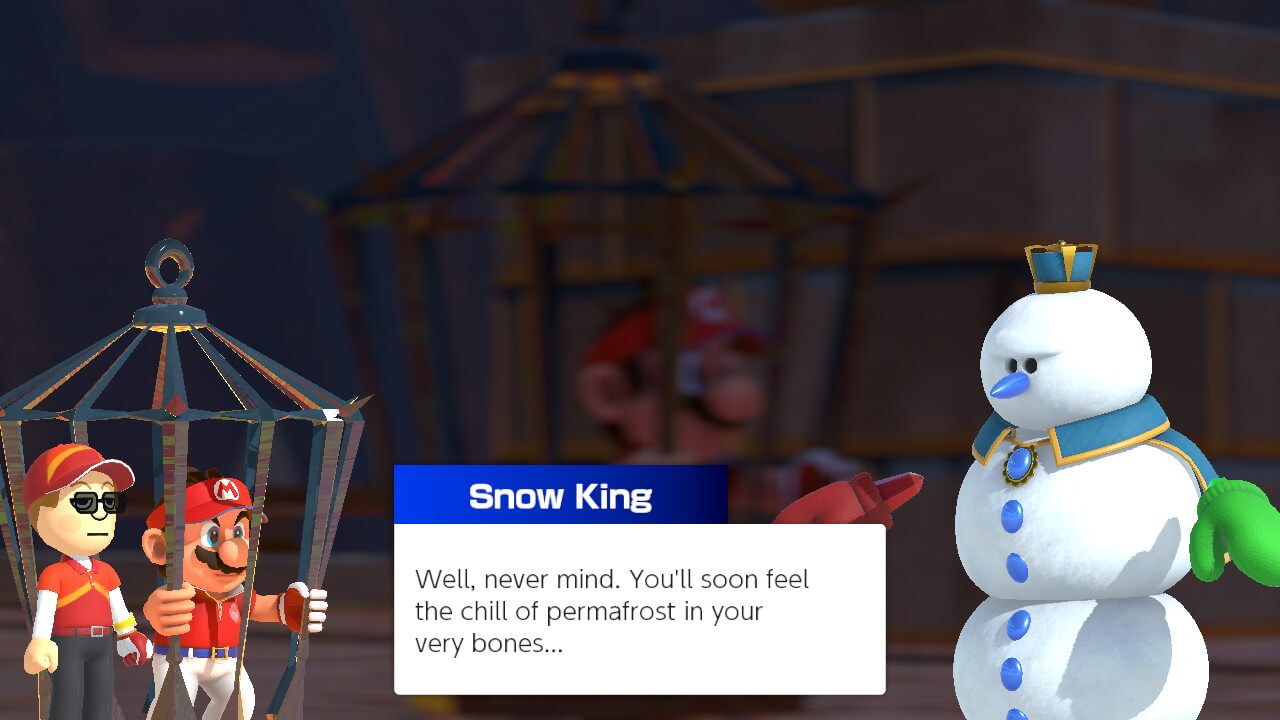 Your battle with the Snow King will take place at the very end of the Golf Adventure storyline. After making your way to Bowser Highlands, you will be immediately directed to the Main Course, where you need to complete the first 9 holes before reaching the Snow King.

How to Beat the Snow King 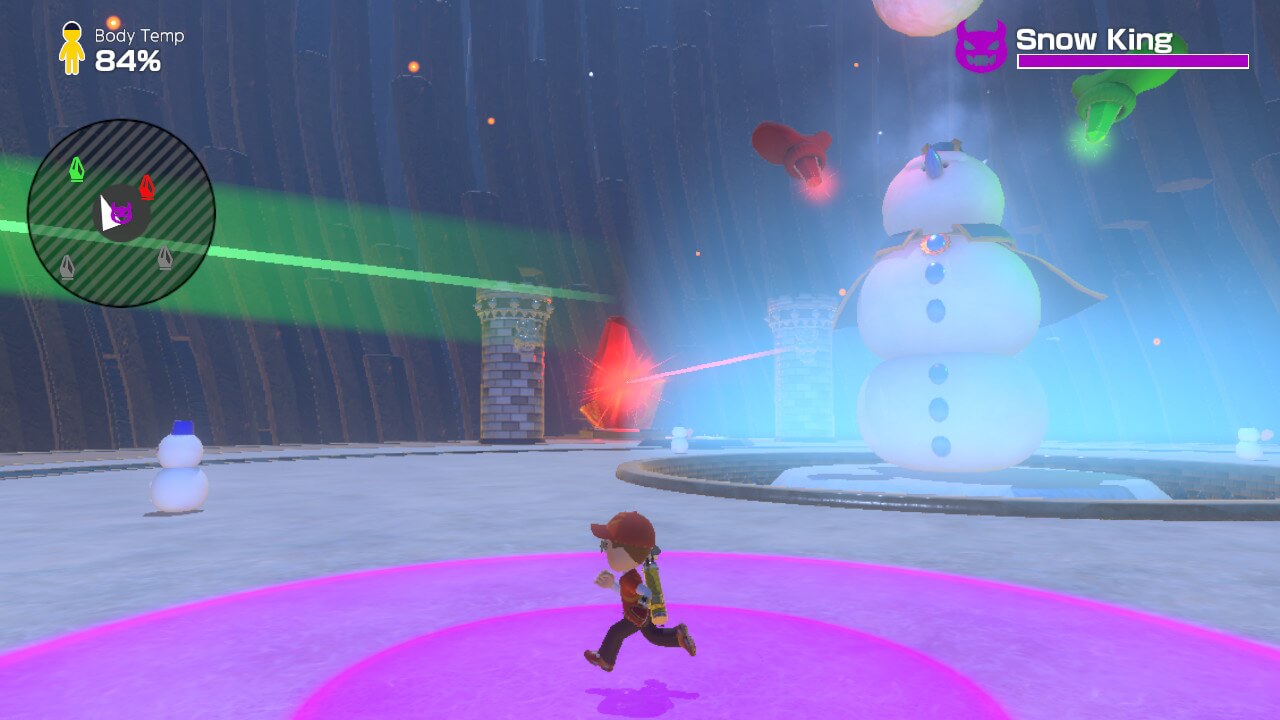 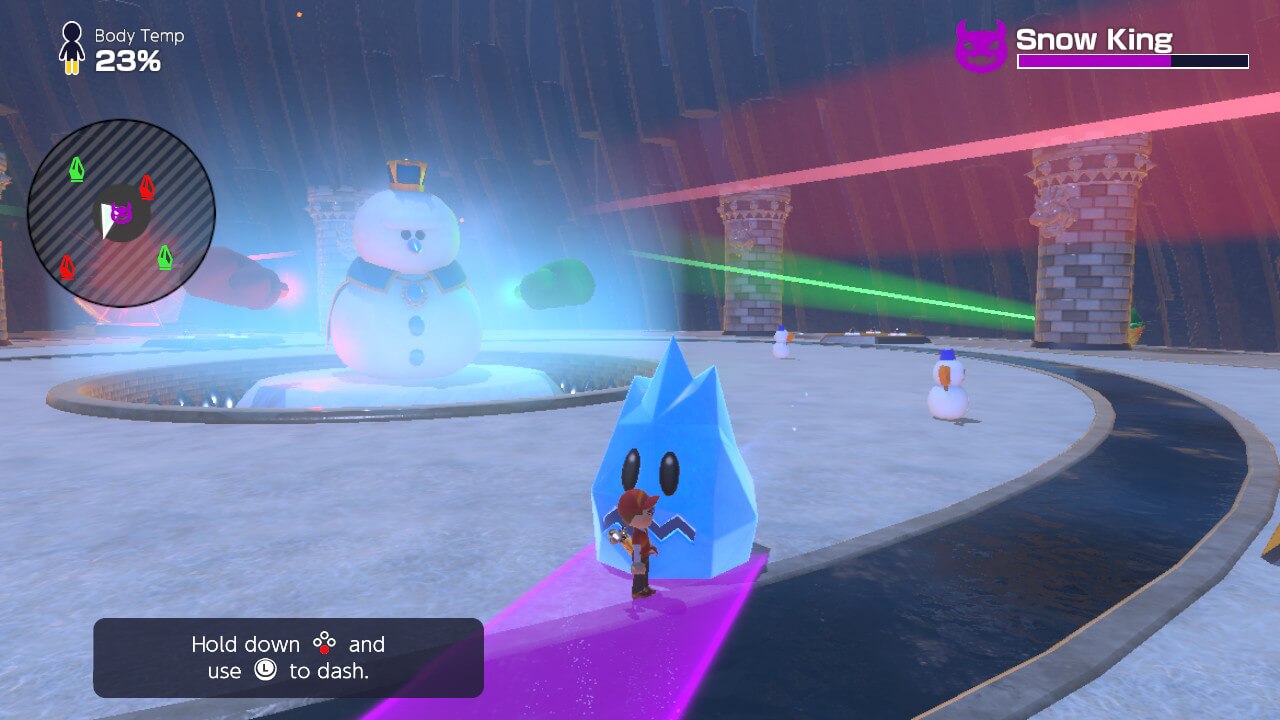 Taking Down the Crystals 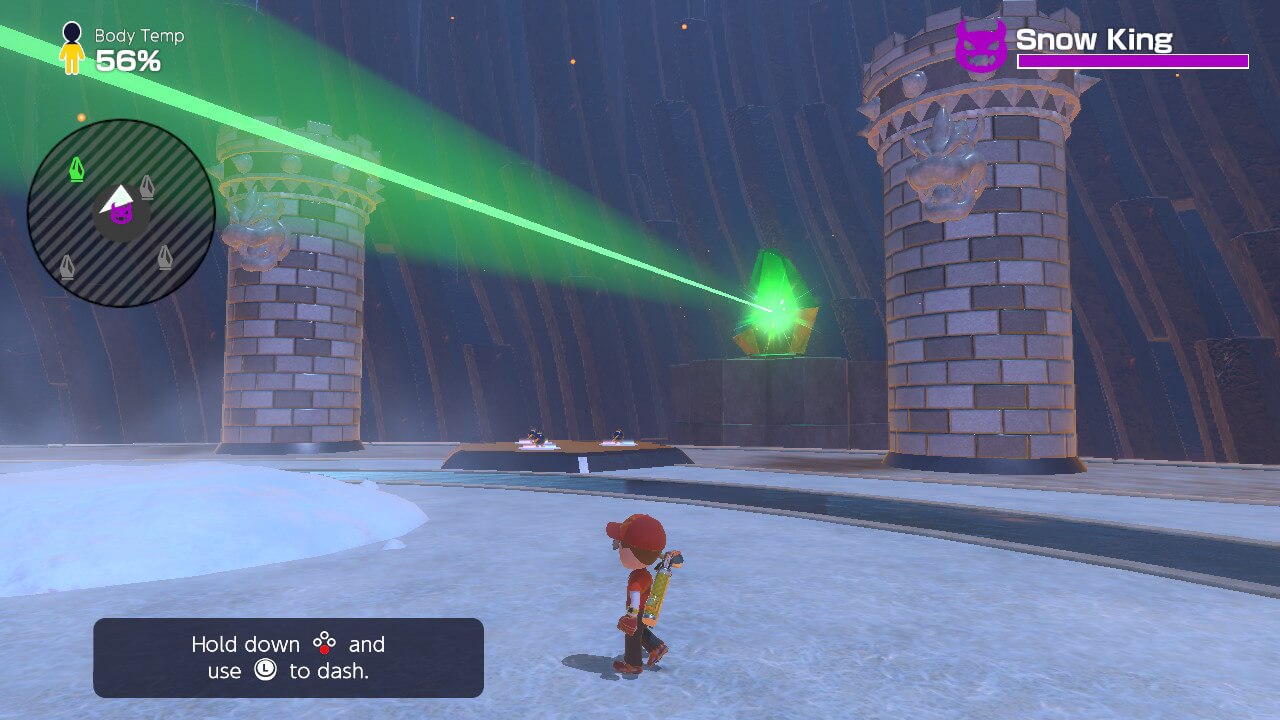 The first step to defeating the Snow King is to get rid of his arms by taking out the crystals in the arena. You can spot a total of four crystals around the room, two of which emit a beam of light. Run to one of the platforms in front of the crystals and press the A Button near one of the Bob-ombs. 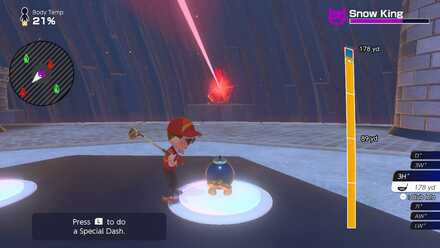 Launch Bob-ombs at both of the glowing crystals to get rid of the Snow King's arms. If the Bob-ombs are destroyed or if you miss your shot, wait a few moments for the Bob-ombs to respawn. 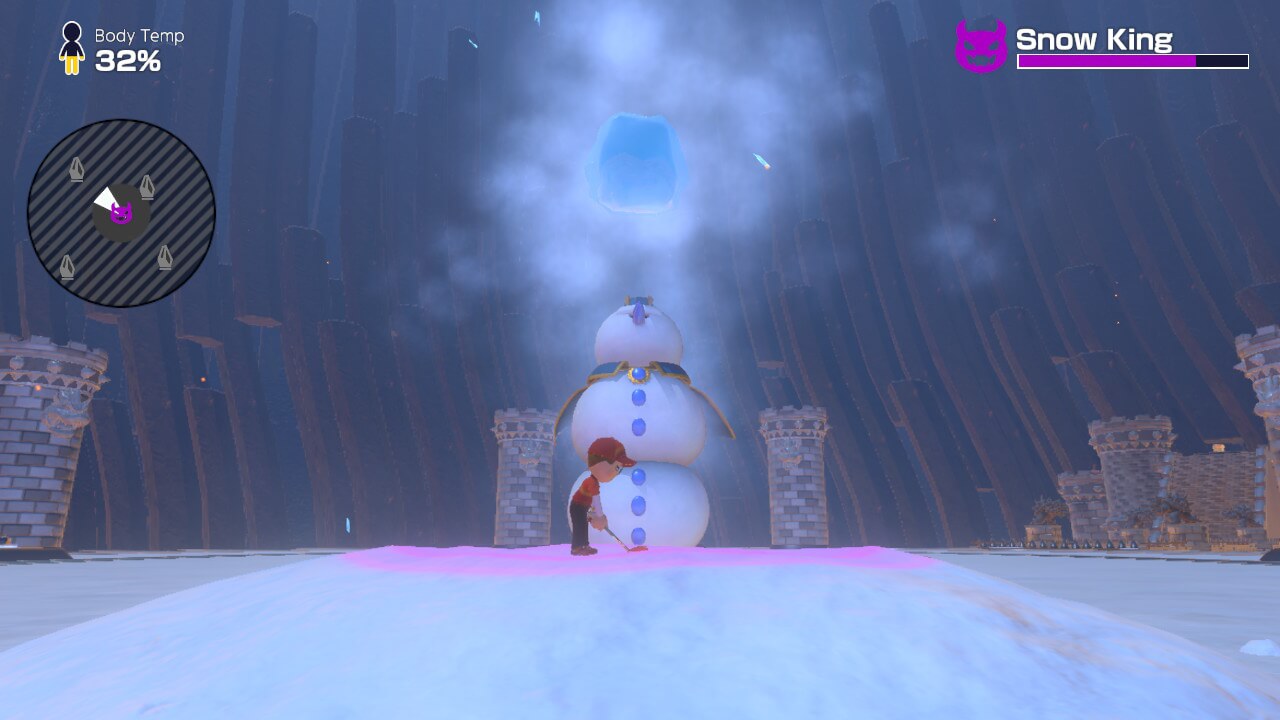 After getting rid of both his arms, the Snow King will start launching large snowballs at you. After the first snowball has been launched, it will leave behind a mound of snow on the ground. Stand on the snow mound and Press the A Button. 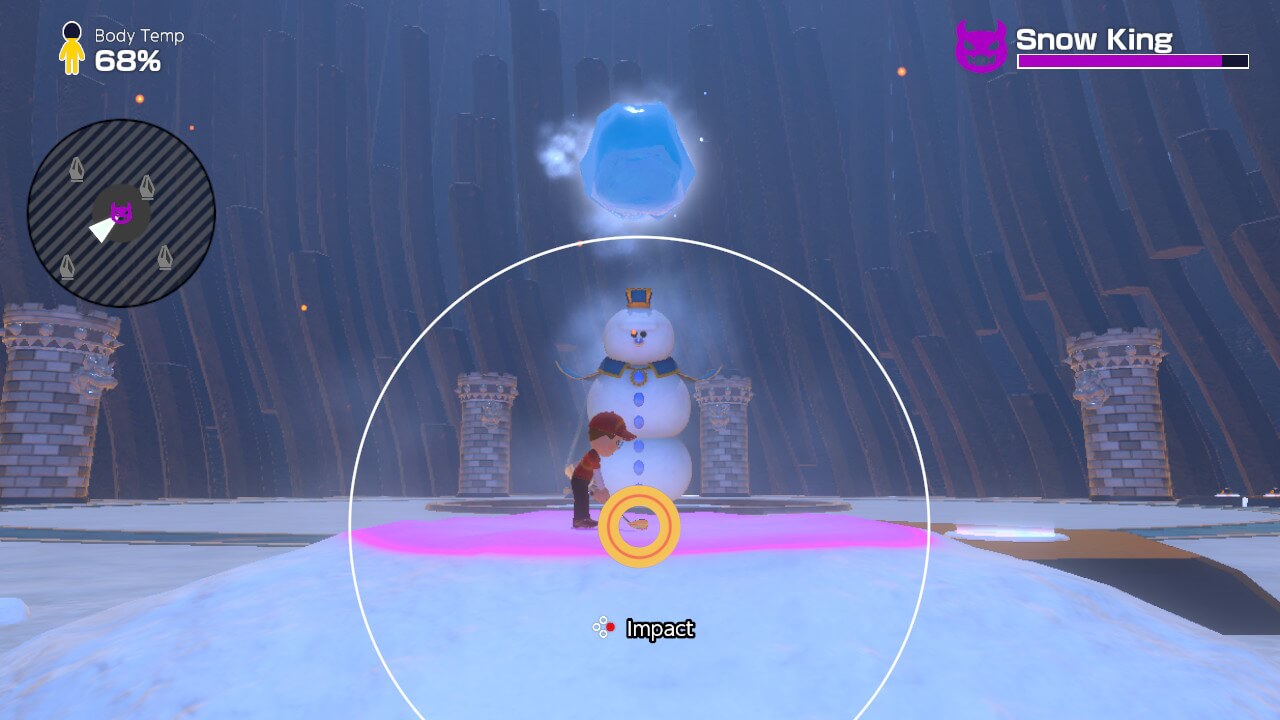 You can now use Duff Shots to deflect the second snowball back at the Snow King. If successful, you will destroy the bottom segment of the Snow King, leaving him with only his torso and head.

How to Perform Lob Shots and Duff Shots 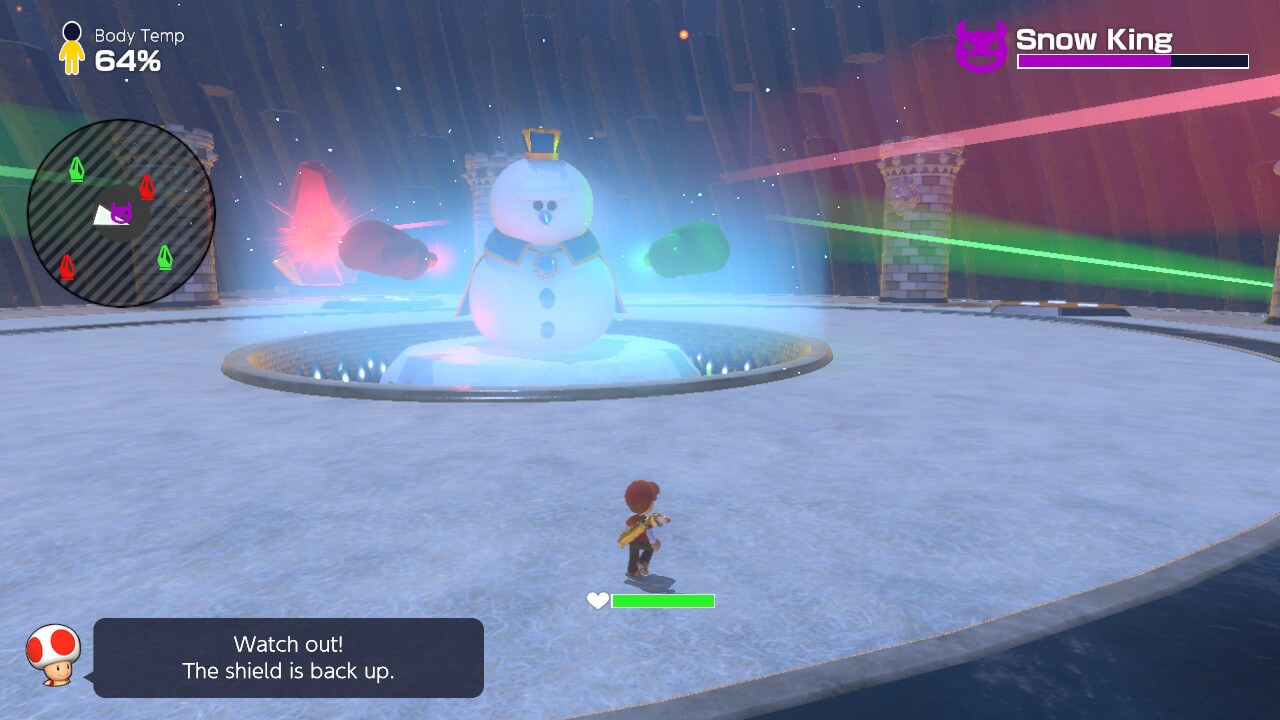 After destroying the bottom segment of the Snow King, he will regrow his arms, and you will need to get rid of them again. However, this time you need to hit all four crystals in the room with Bob-ombs. 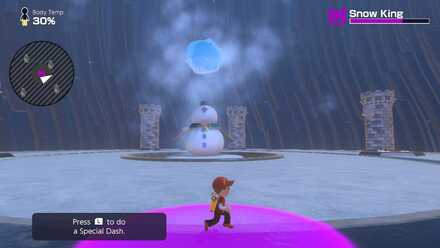 Once you hit all four crystals, you again need to deflect another snowball at the Snow King by waiting for it to launch the first snowball and hitting the second snowball with a Duff Shot.

Finshing Off the Snow King 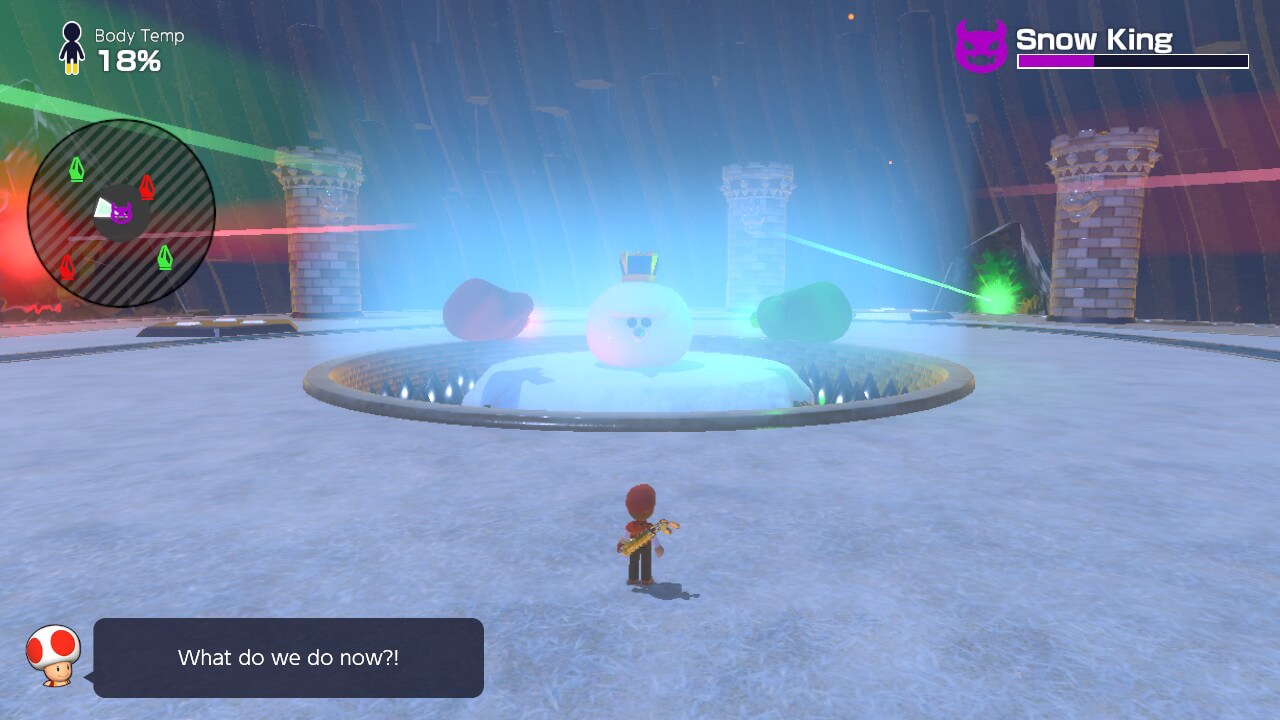 After successfully destroying the Snow King's torso he will be left with a head and two floating arms. During the final stage of the battle, all the crystals around the room will be shielded in ice, and you can no longer hit them with Bob-ombs. 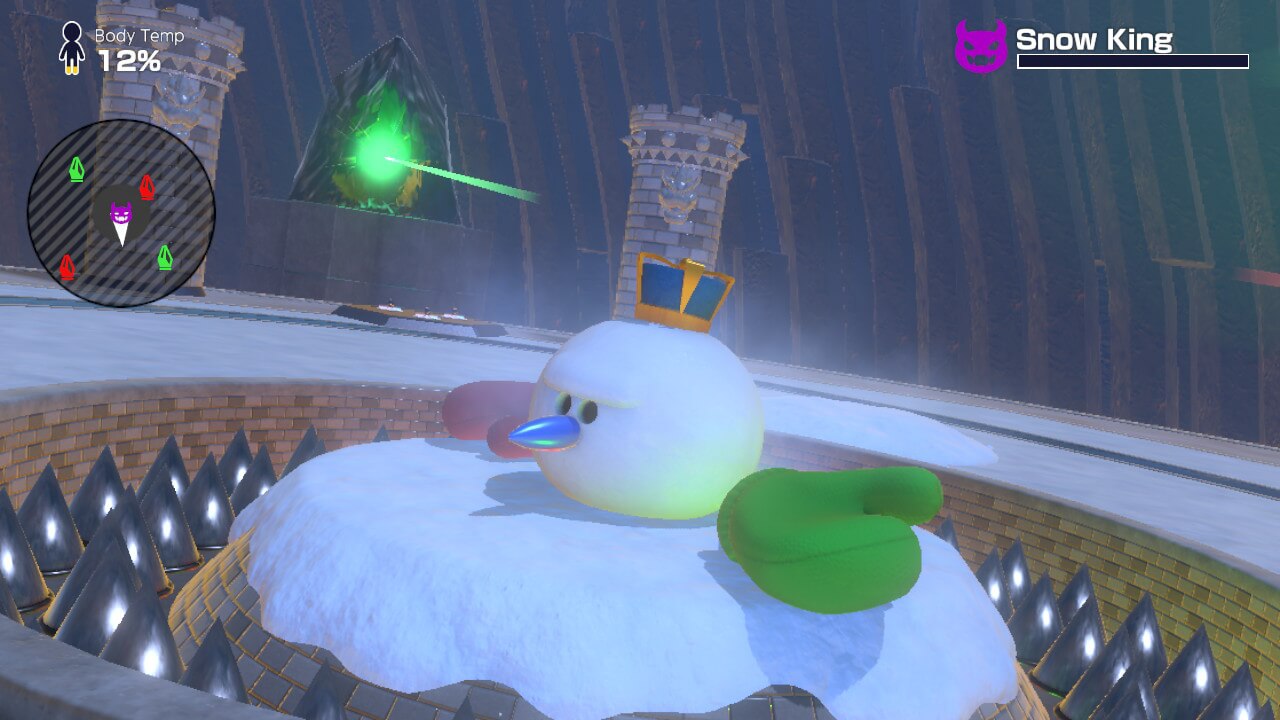 Instead of aiming for the crystals, you can immediately start deflecting the Snow King's snowballs by following the previous steps. Once you successfully deflect one last snowball, you have officially defeated the Snow King and will receive your Platinum Badge.

Because the only shots you actually need to hit are at the crystals, long-distance clubs are not necessary when defeating this boss. Instead, it is better to bring a more versatile club such as the Goomba 3 Hybrid, which has the added benefit of being unaffected by ice.

Heat Attire is essential in during this battle to help prevent heat loss and allow you to take more hits from the Snow King.

Snow Shoes allow to move faster through the snowy floors of the room.

In order for us to make the best articles possible, share your corrections, opinions, and thoughts about 「Snow King Boss Guide: How to Beat the Snow King | Mario Golf: Super Rush (Switch)」 with us!