How to Use Toadette: Character Stats and Abilities | Mario Golf: Super Rush (Switch) 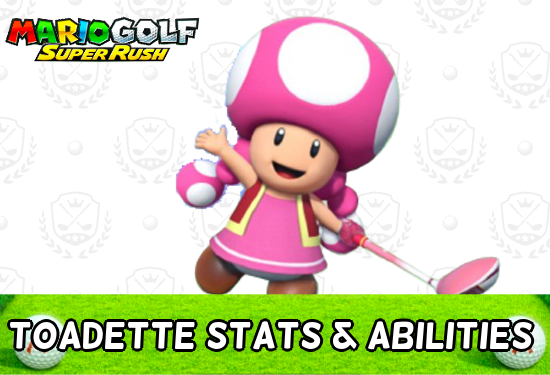 This is a guide on how to use the character Toadette in Mario Golf: Super Rush for the Nintendo Switch. Read on to learn about Toadette stats and club sets, all character animations, as well as Toadette's Special Shot and Special Dash abilities!

How to Use Toadette

Specializes in Control and Speed

Toadette specializes in Control, but her Speed stat is equal to most of those of who specialize in Speed. Her high control skill alone makes her a good choice for courses with strong wind and weather conditions, while her high speed and ability to hit more accurate shots makes her suited for shorter courses in Speed Golf.

Unfortunately, however, Toadette's Power is extremely low (the lowest of any character) and her Stamina stat is not much better. These lower stats overall detract from the usability of her high Control (when aiming for less strokes) and high Speed (when going for fastest time).

All Toadette Scores and Celebrations

In order for us to make the best articles possible, share your corrections, opinions, and thoughts about 「How to Use Toadette: Character Stats and Abilities | Mario Golf: Super Rush (Switch)」 with us!