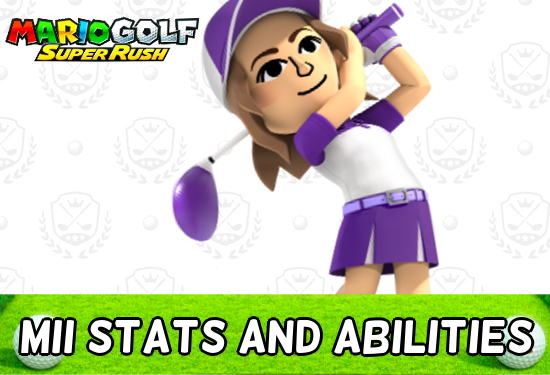 This is a guide on how to use the Mii Character in Mario Golf: Super Rush for the Nintendo Switch. Read on to learn about Mii base stats and level cap, as well as how to level up the Mii in Golf Adventure!

The above table depicts the Mii base stats when you begin Golf Adventure mode and Mii stats level cap. You're able to buff each stat to fit your own playstyle, with each stat having its own level cap.

The level cap for Power is 360 yds, which you can only attain if you spend all 100 level up points on the Power stat. Doing so will cause Stamina to remain at base level, and all the other stats to be reduced to 1.

Level Up Your Mii Character 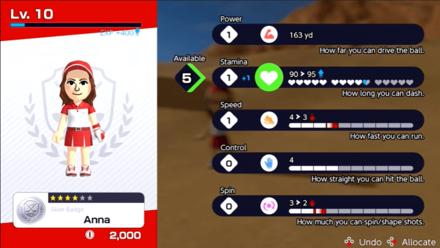 As you level up in Golf Adventure, you can customize your Mii by leveling up any stat you desire. You're only given 100 points to level up your stats with, so decide carefully which stats to buff.

Level Up Guide: How to Reach Mii Max Level

Can Be Played in Other Game Modes 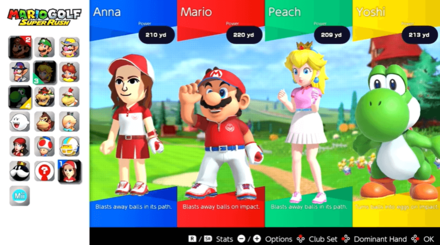 Play your Mii Character in other game modes, such as Speed Golf and Battle Golf, against CPU, in local multiplayer, or in online play! 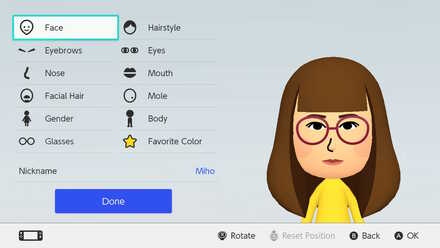 Creating a new Mii Character lets you customize both its facial and physical appearance. If you choose a preset Mii Characters from the Choose a Look-Alike option, you can only adjust their appearances.

In the Golf Adventure mode, you gain the Power of the Flame after defeating the Sacred Flamebeast. This adds flames to the animation of your Special Shot, but its effect remains the same.

The animation appears in other game modes after gaining it in Golf Adventure.

Special Dash levels up at level 20 and 40

How to Use Your Mii Characters

Special Dash Into the Ball Until You Reach Level 40 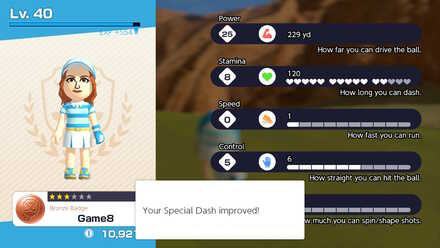 The Mii's initial Special Dash is a straightforward speed boost up until Level 40, when it gains jumps and spins. Before Level 40, you can Special Dash into the ball while playing Speed Golf (in Play Golf or Golf Adventure) to save you precious seconds, because your Stamina replenishes anyway when you're lining up your shot.

It's not recommended to Special Dash into your ball anymore after reaching Level 40, as you're most likely to jump over and completely miss your ball.

Focus on Power and Control for Mii Character

In Golf Adventure, the best stats to level up are Power and Control. You need to end up with a Power level of at least 280 to stand against the Mario characters when they have super star club sets. Your Control stat needs to be high as well, or else medium-long putting is going to be very difficult.

While not as much as a priority as Power and Control, Stamina should also be leveled up to at least 120, in order for your Mii Character to Special Dash twice in a row and still have a reserve of stamina.

Best Stats to Level Up

All Mii Scores and Celebrations

Below is a lsit of obtainable outfits for your Mii Character in Golf Adventure.

Do Outfits Affect Mii Stats in Other Golf Modes?

No, the Mii's stats in other game modes are unaffected by golf equipment and their various effects. In other game modes, the Mii Character's outfit is locked to the default outfit it started Adventure Mode on.

Register as a member and get all the information you want. (It's free!)
Login
Opinions about an article or post go here.
Opinions about an article or post
We at Game8 thank you for your support.
In order for us to make the best articles possible, share your corrections, opinions, and thoughts about "Mii Character Stats and Abilities" with us!
When reporting a problem, please be as specific as possible in providing details such as what conditions the problem occurred under and what kind of effects it had.