Minecraft Dungeons is out now! Check out our complete guide on How to Purchase and Download the Game on each available platform!

If you've started playing, check out some of our newest, highly detailed strategy guides. Made with love!
★ Best Builds for Early Game
★ How to Play Online or Local Multiplayer
★ How to Beat Redstone Golem 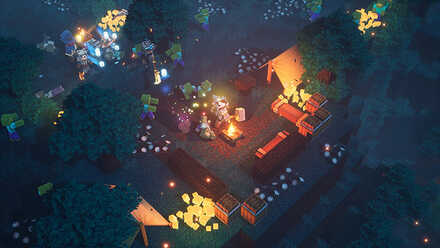 Want to learn more about the Minecraft Dungeons Beta? Read on for information about the limited closed beta and find out if it is still possible to join.

About the Minecraft Dungeons Beta

What is the Minecraft Dungeons Beta?

Mojang opened a closed beta exclusively for Microsoft Windows players from March 25th to April 25th, 2020. Participants were able to enter on the Minecraft Dungeons website for a chance to participate in the limited beta.

The beta release seems to have been primarily for testing purposes, with the official FAQ stating that the Beta is “aimed towards testing online gameplay.” This explains why only a few players were given the opportunity to access the game.

The beta is also known to have only included “a small sample of content from the full version of Minecraft Dungeons.” It's highly likely that there will still be many more surprises waiting that were not revealed in the beta version.

How to Join the Minecraft Dungeons Beta

Beta Period is Over 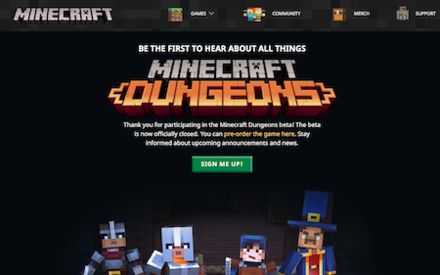 A notice on the official site declares that the beta period has ended.

Unfortunately, the beta period has ended, and it is no longer possible to play the Beta.

In fact, even players who were given access to the Beta are no longer able to play the game. As such, it seems that there's truly no way to play the game until the release date, barring any last-minute demo release from Mojang.

We'll be adding more information at lightning speed as the release date approaches! Check back here at Game8 to find out if any new demo releases or beta versions become available this month.

>>4 Me too! I already pre-ordered the game on Switch!

>>3 oh wow, didnt' even realize the release was that close already! I'm so excited!

Register as a member and get all the information you want. (It's free!)
Login
Opinions about an article or post go here.
Opinions about an article or post
We at Game8 thank you for your support.
In order for us to make the best articles possible, share your corrections, opinions, and thoughts about "How to Join the Minecraft Dungeons Beta | All About the Beta Version" with us!
When reporting a problem, please be as specific as possible in providing details such as what conditions the problem occurred under and what kind of effects it had.