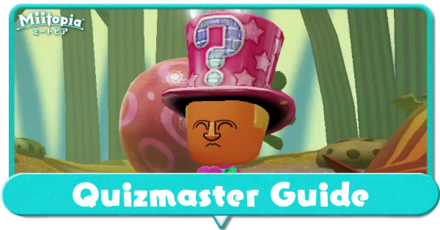 This is a guide on the Quizmaster on Miitopia for the Nintendo Switch. Read on to learn the Quizmaster's quizzes, as well as tips and tricks on how to answer them. 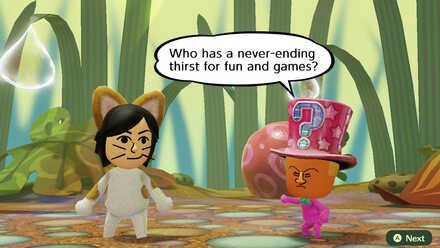 The Quizmaster is a non-playable character that challenges players to answer various various questions correctly and win prizes.

How to Find the Quizmaster 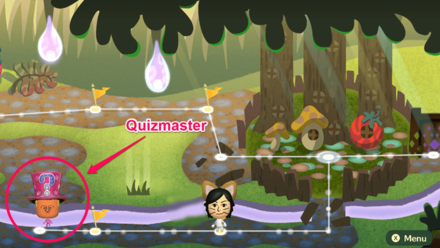 The Quizmaster will appear in random areas as you clear the first Chapter and enter Neksdor. He can be seen in the World Map wearing a pink jumpsuit and a top hat. You can customize the Quizmaster's facial features using the Records option in the Pause Menu.

Answering the Quizmaster's questions correctly will reward the player with one of the three possible prizes: 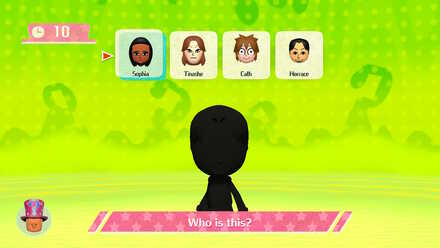 In each quiz (except for Mii Parade), the player is given ten seconds to answer the question correctly, or else the player will automatically fail the quiz and receive a consolation prize instead.

The player must identify which Mii passed through the curtains from a selection of four different Miis. As the quiz progresses, the Miis will move accross the curtains in a more unpredictable manner, making it more challenging.

The player must answer three questions related to all sorts of things. This includes story bits, gameplay mechanics, and real-life topics.

The player will first watch an ensemble of Miis in a parade and then will be asked various questions related to the parade such as how many Miis were on the parade, whether or not a specific Mii character was in the parade, or what Miis performed a certain kind of action. AS previously mentioned, this type of quiz has no time.

The player is shown a silouette of a Mii Character from the game and must choose from four possible answers which one is the Mii behind silhouette.

Similar to the Find the Ball Under the Cup game, the player must find the bag of money hidden in one of the three or four treasure chests. The player is given the opportunity to see where the money bag is put first before the chests are shuffled.

The player is shown four different Miis and is asked to identify a specific character from one of them.

The player must identify from four different versions of the same Mii character which one looks the Mii that has been a part or currently is in the player's party.

This quiz is only available in the game's post-ending content. It is basically a mix of questions from the other seven types of quizzes shown above.

Press Y to Freeze the Game

If you fail the quiz, the player can reset the game immediately and restart the quiz to have another chance to answer the questions correctly.

Register as a member and get all the information you want. (It's free!)
Login
Opinions about an article or post go here.
Opinions about an article or post
We at Game8 thank you for your support.
In order for us to make the best articles possible, share your corrections, opinions, and thoughts about "Quizmaster Guide" with us!
When reporting a problem, please be as specific as possible in providing details such as what conditions the problem occurred under and what kind of effects it had.