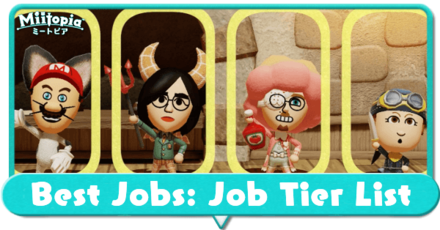 This is a guide to the best Jobs (Classes) in Miitopia for the Nintendo Switch. Learn which Jobs are best for the player character and other party members with our Job Tier Lists, and which Jobs to use in the early game, late game, and endgame.

Best Jobs for the Hero

The Cat is commonly touted as the strongest choice for the Hero with good reason. Although its power is limited at first, the Cat comes into its own at Level 32, when it learns Feline Frenzy, an all-target attack which deals some of the highest damage in the game.

It can also learn Steal Grub at level 21, which allows it to take Grub which can be used later, not to be confused with the lower-value healing items, HP Bananas and MP Candies. When used against Bosses, it can even steal Rare Grub and Very Rare Grub, making this one of the easiest ways to farm these items and max out your party's stats in the post-game.

The Cat is even able to restore its own HP, and recover on its own when afflicted with status conditions, making it truly independent of need for support. The variety of choices associated with the Cat make it best used for the player-controlled Hero, instead of teammates, as the player will be most prepared to make the best possible use of its abilities.

The Thief is a solid choice for the early game, though its utility starts to wane later on. Its basic attack hits all enemies for free, which is great for the start of the game where techniques which accomplish this are less common.

The Pilfer Skill which it learns at level 5 is great in Chapter 1, when the supply of Snacks is still limited. This Skill can steal HP Bananas and MP Candies from enemies, and as these items increase in effectiveness the more you eat them, Chapter 1 is a great time to take advantage of this Skill to eat as many Snacks as possible and increase their potency.

Although the Elf is only available after the end of the game, it's potentially worth it to switch your Hero over at this point.

Unlike the self-sufficient Cat, the Elf works with the rest of the team as the most capable support class in the game. Elves can restore MP to party members with Forest's Blessing, reduce all incoming damage to the party with Forest Aegis, and heal the entire party with Healing Melody.

Not only can they support others, but they can also dish out damage themselves after they acquire the all-target Hail of Arrows at Level 34.

The Warrior is a meathead who gets the job done. Since teammates can't be controlled directly, the Warrior is a perfectly reliable ally who you can always expect to give the enemy what-for.

Since there are no enemies immune to physical damage in this game, the Warrior is useful against all types of enemies, and even parties stacked with Warriors are feasible.

The Scientist is renowned for its high Speed and attacking power. It also learns all-targeting Skills early compared to other classes, making it highly useful as soon as it is added into the party.

Its unique ability Safety Mask helps it stay useful through the endgame, as enemies later in the game start to use more and more status-afflicting attacks. This Skill prevents the effects from being afflicted in the first place, marking it superior to simple restorative effects.

The Mage is an awesomely powerful class right off the bat for eliminating weak enemies in a single go with all-target attacks like Explosion, and hard-hitting single moves like Mega Flare.

However, the Mage's utility starts to fade in the later game, when it becomes difficult to maintain its HP and MP given its fragility.

It's best to switch jobs to the similar but much more defensively powerful Vampire class, which has powerful Skills like Curse which afflict damage to the enemy each time they are attacked. The Vampire even has the ability to come back to life on its own with the Revive Skill, making it much more prepared for difficult endgame battles.
How to Change Jobs

Register as a member and get all the information you want. (It's free!)
Login
Opinions about an article or post go here.
Opinions about an article or post
We at Game8 thank you for your support.
In order for us to make the best articles possible, share your corrections, opinions, and thoughts about "Best Jobs: Job Tier List" with us!
When reporting a problem, please be as specific as possible in providing details such as what conditions the problem occurred under and what kind of effects it had.