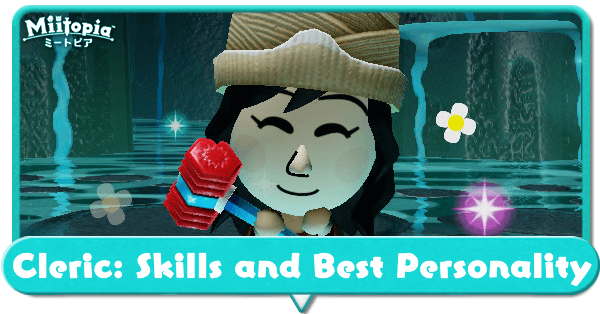 This is a guide for the Cleric Job in Miitopia for the Nintendo Switch. Read on to learn how to unlock the Cleric, skills, weapons, outfits, and best personality to use with the Cleric Job!

Clerics can recover HP and status conditions, and can revive allies who have become incapacitated. You can even the battle by making one of the four members a Cleric.

When the enemies become stronger after clearing the game, Giga Resurrection can revive friends with high amounts of HP.

Not Required to Use

As mentioned earlier, Clerics have strong healing skills, but it is not mandatory to use this for parties as there are items that provide healing, as well as the existence of safe zones. If you are having trouble protecting your party members, having a Cleric should make surviving much easier.

Best Personality for Cleric in Miitopia

Choose 'Cool' During the Main Story

Clerics have low defenses, and it goes well with Cool's quirks. If you have more than one person at a party, it's a good idea to use Cool.

As you finish the Main Story, you will have more skills that consume a lot of MP, so it is recommended to switch your personality to Energetic during Chapter 5 to have the ability to restore MP to your allies.

Best Stats to Increase for Cleric

How to Unlock Cleric in Miitopia

Cleric Available from the Start

The Cleric Job is available to choose from the start of the game. Please refer to the guide below to learn more about every Job's availability:

Here is a list of skills for the Miitopia Cleric.

Here is a list of outfits and weapons for the Miitopia Cleric.

Register as a member and get all the information you want. (It's free!)
Login
Opinions about an article or post go here.
Opinions about an article or post
We at Game8 thank you for your support.
In order for us to make the best articles possible, share your corrections, opinions, and thoughts about "Cleric Job: Equipment, Skills, and Best Personality" with us!
When reporting a problem, please be as specific as possible in providing details such as what conditions the problem occurred under and what kind of effects it had.