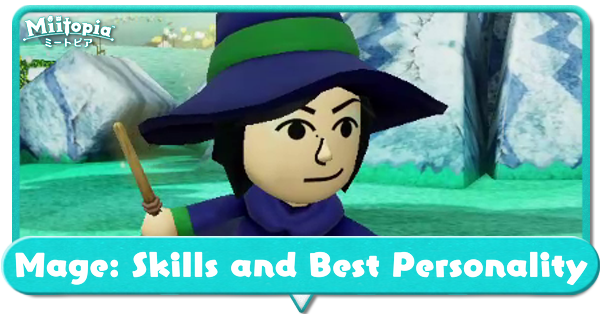 This is a guide for the Mage Job in Miitopia for the Nintendo Switch. Read on to learn how to unlock the Mage, skills, weapons, outfits, and best personality to use with the Mage Job!

Mage is a powerful class that can defeat weak enemies in a single attack using abilities like Explosion, and hard-hitting skills like Mega Flare.

Not Recommended Against Bosses

As you progress through the game, you may be at a disadvantage due to Mage's low HP and high MP-consuming skills. Using a Mage as your main hero is only recommended during the early stages of the game.

Best Personality for Mage in Miitopia

For Mages, Cool or Laid-back is the way to go. Mages are not the defensive type, so choosing Laid-back can give you protection during combat. However, if you want to turn your Mage into a fighter, but at the cost of being vulnerable, choose Cool instead.

Best Stats to Increase for Mage

Mages usually focus on destroying enemies quickly, so investing in Magic stat is a must. They also need to be able to continuously dish out spells to deal damage so investing in MP is also highly recommended. Speed is a good secondary stat to invest in to take enemies out before they can attack.

How to Unlock Mage in Miitopia

The Mage Job is available to choose from the start of the game. Please refer to the guide below to learn more about every Job's availability:

Here is a list of outfits and weapons for the Miitopia Mage.

Register as a member and get all the information you want. (It's free!)
Login
Opinions about an article or post go here.
Opinions about an article or post
We at Game8 thank you for your support.
In order for us to make the best articles possible, share your corrections, opinions, and thoughts about "Mage Job: Equipment, Skills, and Best Personality" with us!
When reporting a problem, please be as specific as possible in providing details such as what conditions the problem occurred under and what kind of effects it had.