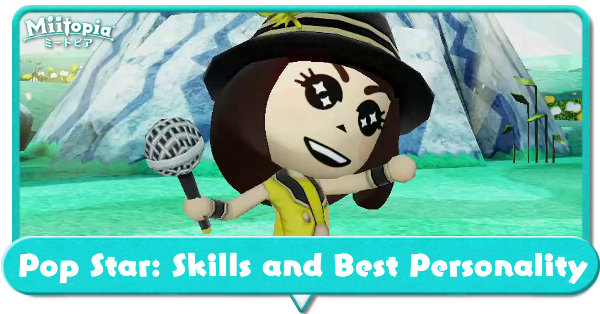 The Pop Star has a fairly low attack power, but what it lacks in firepower, makes up for its support abilities that can increase your party's performance against enemies.

Compatible with Other Magic Types

In relation to being a support role, the Pop Star's abilities mesh well together with other magic types such as Mages, Clerics, and Scientists. Chain its skills with the other Job's buffing abilities and your party will be a force to be reckoned with.

Choose 'Cool' During the Main Story

As you finish the Main Story, you will have more skills that consume a lot of MP, so it is recommended to switch your personality to Energetic during Chapter 5 to have the ability to restore MP to your allies and to have better MP management.

Pop Stars want to focus purely on supporting their allies, so an investment in MP helps them cast more skills while an investment in Speed helps quickly support allies or debuff enemies first using Earworm.

How to Unlock Pop Star in Miitopia

The Pop Star Job is available to choose from the start of the game. Please refer to the guide below to learn more about every Job's availability:

Here is a list of skills for the Miitopia Pop Star.

Here is a list of outfits and weapons for the Miitopia Pop Star.

Register as a member and get all the information you want. (It's free!)
Login
Opinions about an article or post go here.
Opinions about an article or post
We at Game8 thank you for your support.
In order for us to make the best articles possible, share your corrections, opinions, and thoughts about "Pop Star Job: Equipment, Skills, and Best Personality" with us!
When reporting a problem, please be as specific as possible in providing details such as what conditions the problem occurred under and what kind of effects it had.