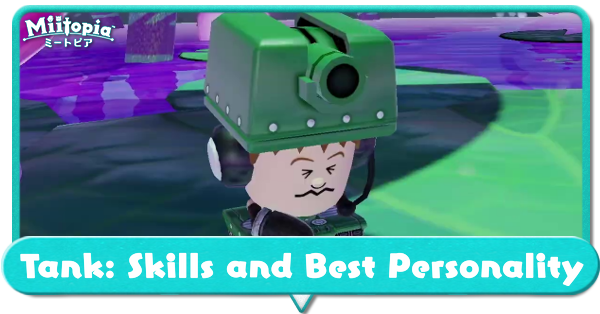 This is a guide for the Tank Job in Miitopia for the Nintendo Switch. Read on to learn how to unlock the Tank, skills, weapons, outfits, and best personality to use with the Tank Job!

Tanks possess high attack and defense power, but in exchange for their speed. Due to this, Tanks will often be the last units to act during a fight. In addition to using MP for skills, Tanks also consume MP whenever they use normal attacks. This can quickly deplete MP and leave them as sitting ducks if they don't pay attention to their MP reserves.

Best Personality for Tank in Miitopia

Choose 'Cautious' During the Main Story

Tanks lack speed, so the Cautious personality synergizes perfectly with Tanks which usually attacks last compared to other Jobs. The Tank's abilities further cement their roles as slow but strong damage dealers.

As you finish the Main Story, you will have more skills that consume a lot of MP, so it is recommended to switch your personality to Energetic during the second half to have the ability to restore MP to your allies.

Best Stats to Increase for Tank

Tanks must capitalize on their high destructive and defensive power, so investing in Attack and Defense stats are ideal. It's also important to invest into their MP second, as their normal attacks consume MP alongside their skills.

How to Unlock Tank in Miitopia

The Tank Job becomes available in the Realm of the Fey, which is unlocked after completing Chapter 2. At the same time, the Princess and Flower jobs become available. Please refer to the guide below to learn more about every Job's availability:

Here is a list of outfits and weapons for the Miitopia Tank.

Register as a member and get all the information you want. (It's free!)
Login
Opinions about an article or post go here.
Opinions about an article or post
We at Game8 thank you for your support.
In order for us to make the best articles possible, share your corrections, opinions, and thoughts about "Tank Job: Equipment, Skills, and Best Personality" with us!
When reporting a problem, please be as specific as possible in providing details such as what conditions the problem occurred under and what kind of effects it had.