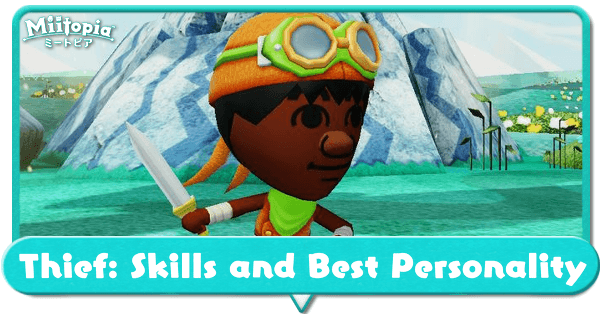 This is a guide for the Thief Job in Miitopia for the Nintendo Switch. Read on to learn how to unlock the Thief, skills, weapons, outfits, and best personality to use with the Thief Job!

The Thief is a solid choice for the main hero in the early game, though its utility starts to wane later on. Its basic attack hits all enemies for free, which is great for the start of the game where techniques which accomplish this are less common.

The Horse Whispering assist skill can increase the chances of your Thief stealing grub from enemies, which is necessary to strengthening your character.

Best Personality for Thief in Miitopia

Thieves are recommended to use Kind personality, especially if you're in the early stages of the game. Being Kind gives you the ability to share resources with your allies, strengthening your party.

As you finish the Main Story, you will have more skills that consume a lot of MP, so it is recommended to switch your personality to Energetic during the second half to have the ability to restore MP to your allies, and to have better MP management.

Best Stats to Increase for Thief

As aThief, you should focus on increasing the Attack stat in order to increase the amount of damage dealt to enemies. Speed is also a useful stat when it comes to using skills such as Booby Trap or Huge Trap, which grant protection against enemy attacks.

How to Unlock Thief in Miitopia

Thief Available from the Start

The Thief Job is available to choose from the start of the game. Please refer to the guide below to learn more about every Job's availability:

Here is a list of skills for the Miitopia Thief.

Here is a list of outfits and weapons for the Miitopia Thief.

Register as a member and get all the information you want. (It's free!)
Login
Opinions about an article or post go here.
Opinions about an article or post
We at Game8 thank you for your support.
In order for us to make the best articles possible, share your corrections, opinions, and thoughts about "Thief Job: Equipment, Skills, and Best Personality" with us!
When reporting a problem, please be as specific as possible in providing details such as what conditions the problem occurred under and what kind of effects it had.