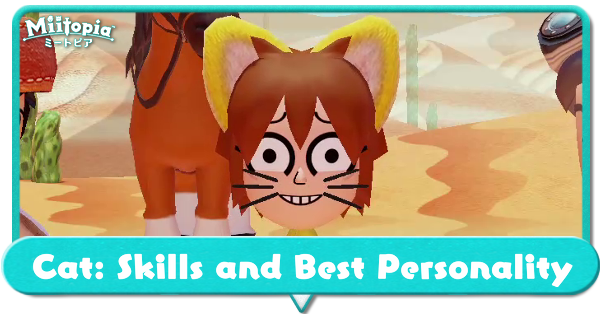 This is a guide for the Cat Job in Miitopia for the Nintendo Switch. Read on to learn how to unlock the Cat, skills, weapons, outfits, and best personality to use with the Cat Job!

The Cat is commonly touted as the strongest choice for the Hero. Although its power is limited at first, the Cat comes into its own at Level 32, when it learns Feline Frenzy, an all-target attack which deals some of the highest damage in the game.

In addition, it is possible to efficiently collect dishes by learning Steal Grub at level 21. It is a skill that can be especially useful when strengthening the status by cooking in the replay part after clearing.

Best Personality for Cat in Miitopia

'Cool' Is Recommended during the Main Story

Choose 'Stubborn' or 'Energetic' After the Main Story

Cat is a useful Job because they learn Steal Grub at Lv 21. When you reach Lv 21 or higher after clearing the second half of the story, you will be able to steal food twice in one turn by using the Stubborn personality's Again Quirk.

Mp consumption is higher later in the game, so the MP-Restoring Quirk Cheer of Energetic personality becomes more useful as well.

Best Stats to Increase for Cat

Cats need investments in Attack and Speed in order to further improve their capabilities in leading a fight and dealing consistent high damage. Investing in MP also helps to keep the damage up by allowing for more skill casts.

How to Unlock Cat in Miitopia

The Cat Job becomes available in the Neksdor region, which is unlocked after completing Chapter 1. At the same time, Imp and Scientist will be available. Please refer to the guide below to learn more about every Job's availability:

Here is a list of skills for the Miitopia Cat.

Here is a list of outfits and weapons for the Miitopia Cat.

Register as a member and get all the information you want. (It's free!)
Login
Opinions about an article or post go here.
Opinions about an article or post
We at Game8 thank you for your support.
In order for us to make the best articles possible, share your corrections, opinions, and thoughts about "Cat Job: Equipment, Skills, and Best Personality" with us!
When reporting a problem, please be as specific as possible in providing details such as what conditions the problem occurred under and what kind of effects it had.