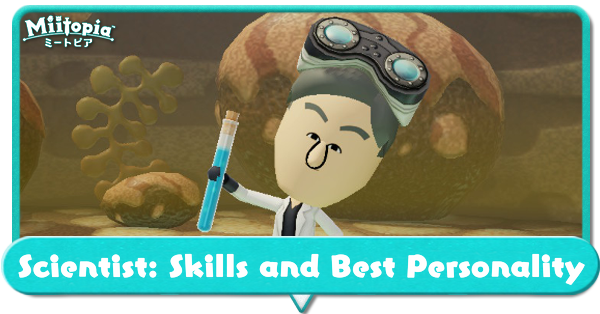 The Scientist is renowned for its high Speed and attacking power. It also learns all-targeting Skills early compared to other classes, making it highly useful as soon as it is added into the party.

Its unique ability Safety Mask helps it stay useful through the endgame, as enemies later in the game start to use more and more status-afflicting attacks. This Skill prevents the effects from being afflicted in the first place, marking it superior to simple restorative effects.

Best Personality for Scientist in Miitopia

For Scientists, Cool or Laid-back is the way to go. Scientists is not a defensive Job, so choosing Laid-back can give you protection during combat. However, if you want to prioritize damage but at the cost of being vulnerable, choose Cool instead.

Best Stats to Increase for Scientist

Magic and Speed stats are highly recommended investments for the Scientist job. Magic helps increase overall damage output while Speed can help Scientists lead the fight with their powerful area-of-effect skills. MP is a good secondary investment that allows for more skill casts.

How to Unlock Scientist in Miitopia

The Scientist Job becomes available in the Neksdor region, which is unlocked after completing Chapter 1. At the same time, the Imp and Cat jobs will be available. Please refer to the guide below to learn more about every Job's availability:

Here is a list of skills for the Miitopia Scientist.

Here is a list of outfits and weapons for the Miitopia Scientist.

Register as a member and get all the information you want. (It's free!)
Login
Opinions about an article or post go here.
Opinions about an article or post
We at Game8 thank you for your support.
In order for us to make the best articles possible, share your corrections, opinions, and thoughts about "Scientist Job: Equipment, Skills and Best Personality" with us!
When reporting a problem, please be as specific as possible in providing details such as what conditions the problem occurred under and what kind of effects it had.