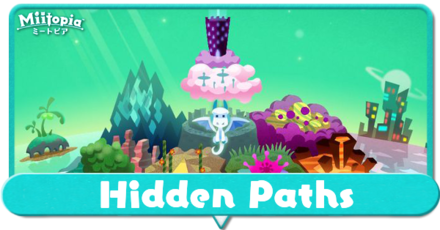 This is a guide to all hidden paths in Miitopia for Nintendo Switch. Learn more about the invisible routes that lead to new areas here!

How to Spot Hidden Paths

Hidden paths are roads that don't appear on the map but can be traversed if you make your character move through them. 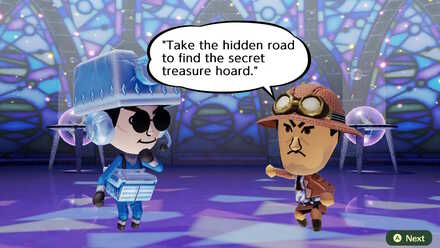 Certain areas have the explorer Meriwether standing in one of the stages. If you speak to him, he may give you clues to a hidden area nearby accessible by a 'hidden road'.

Once you have confirmation that a hidden road is in the area, start moving your character in ways that seem impossible. For example, if you're standing at a road that only goes left and right, try moving up and down and you may just find that your character is seemingly walking on air towards a new area.

When you meet Meriwether at (20), he'll give you a hint to a treasure hoard. When you return to the area map, move up from (20), and you'll find yourself moving towards stage (21), which has a chest containing equipment.

There are two hidden paths for this area. For the first hidden path, you start from (23) and move up one space. Once you've cleared the stage there, move your character left and you will be moved to stage (24), which contains a chest holding higher level equipment.

For the second hidden path, put your character at the corner of the L-shaped section of the path just before reaching the Darker Lord. Once there, move left to arrive at stage (26), which is considered the best area to farm for Very Rare Snurps and HP Bananas.

Register as a member and get all the information you want. (It's free!)
Login
Opinions about an article or post go here.
Opinions about an article or post
We at Game8 thank you for your support.
In order for us to make the best articles possible, share your corrections, opinions, and thoughts about "All Hidden Path Locations" with us!
When reporting a problem, please be as specific as possible in providing details such as what conditions the problem occurred under and what kind of effects it had.