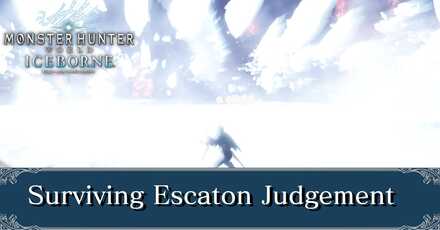 How to Survive Escaton Judgement

Escaton Judgement requires multiple steps to allow hunters to survive it. Below, we'll be listing all the necessary steps you need to take to do so.

Use an Astera Jerky

Alternatively, Use a Max or an Ancient Potion

While these recovery items are more valuable than the Jerky, using a Max Potion or an Ancient Potion can also allow you to survive a weakened Escaton Judgement.

Looking for a more indepth strategy against Alatreon? Check out our Alatreon page and our counter build page for Alatreon!

We attempted to dodge Escaton Judgement by using the Dragoon jump. We got blown off midair and died (fainted) in the process.

There was a rumor that hiding behind a snowman can allow you to dodge Escaton Judgement. The snowman exploded and made the screen bright and we can't even see anything.

We attempted to use the bomb's invincibility frames to dodge the Escaton Judgement. The bombs exploded immediately when the Judgement starts.

Register as a member and get all the information you want. (It's free!)
Login
Opinions about an article or post go here.
Opinions about an article or post
We at Game8 thank you for your support.
In order for us to make the best articles possible, share your corrections, opinions, and thoughts about "How to Survive Escaton Judgement" with us!
When reporting a problem, please be as specific as possible in providing details such as what conditions the problem occurred under and what kind of effects it had.