How to Fix All Error Codes, Bugs, and Known Issues | Battlefield 2042

Welcome to our walkthrough for Battlefield 2042!
☆Updates and Patch Notes: Update 1.05
★How to Fix All Error Codes, Bugs, and Known Issues
☆All Specialist Classes and Best Loadouts
★Best Guns in Battlefield 2042 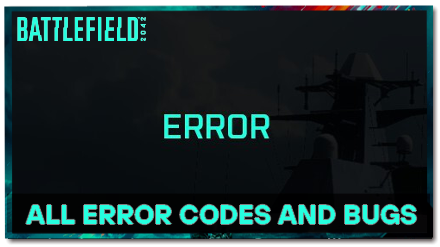 This guide lists all the known bugs and error codes in Battlefield 2042. Read on to learn the meaning of each code, solutions that are available for them, and whether or not each error or bug has been addressed by EA!

All Error Codes and How to Fix

Related to Unable to Load Persistence Data error, which is a server-side issue preventing players from entering through to the main menu of the game. The errors is caused by server issues with EA.

Similar error to 15-7A, which prevents players from entering the main menu of the game due to server issues on EA's side.

Similar error to both 15-7A and 600P:13C, preventing players from entering the main menu and presenting them with an Unable to Load Persistence Data error.

Crossplay-related error that prevents players from loading their Persistence Data. Only known fix as of this time is to turn off Crossplay.

Server issue that causes the Unable to Load Persistence Data error. Can be fixed by simply re-trying to connect to the game or by restarting the game entirely.

Matchmaking error as a result of running an older version of the game. Simply update the game to the latest version and retry. Another version of this problem will occur due to non-installation of latest patches on Steam – this can be fixed by setting download preferences for the game to only update when launching Battlefield 2042.

An in-game error that players on PC can encounter when trying to connect to Battlefield 2042 servers, primarily for Steam users. This issue largely stems from on-going maintenance being held by steam. The only fix for the issue, currently, is to wait for Steam's maintenance to finish, by which time players can connect to the game with no issues.

Server-side issue on EA's end. No known fix except to clear the platform's cache, wait for server operations to resume to normal, or to restart the game entirely.

Server-side issue on EA's end. No known fix except to clear the platform's cache, wait for server operations to resume to normal, or to restart the game entirely.

Unable to launch the game due to problems with the Easy Anti-Cheat (EAC) Software included with the game or because of GPU issues. No known fix except to clear cache, reinstall the game, Steam, or Origin, disable any Anti-Virus Software interfering with EAC, or to install the latest drivers for the GPU.

Failure to launch the game due to interference with the EAC software. Possible fixes are to clear cache, reinstall the game, Steam or Origin, disable Anti-Virus software, or to install the GPU's latest drivers.

Similar error with 30005, 10011, and 10022, where the game will fail to launch due to EAC interference. Fixes include cacche clearing, reinstallation of either the game, Steam, or Origin, disabling Anti-Virus software, or by installing the GPU's latest drivers.

A bug in-game that players from joining in on another player's party/game. No known fixes as of this time, although doing a cache clearing, restart of the game, or reconnection to the internet similar to fixes for Persistence Data related issues may help.

In-game error related to Unable to Load Persistence Data that largely occurs after the deployment of Update #3. Retrying to connect or restarting the game can help to fix the problem.

All Bugs and How to Fix

Cannot Revive or Be Revived

This issue appears if a player is downed and their downed body touches a part of the map's geometry such as walls or other obstacles. This prevents a player from reviving a downed player in such a state, or from being revived themselves. As a temporary fix, players must press on the Start/Escape button and choose to Redeploy from the pause menu, where they'll be allowed to deploy back to the map.

A rare bug where players will be stuck in the queue when trying to join a Portal match or server. The only fix for this issue is to hard-restart the game itself.

Breakthrough End of Round Issue

A bug where players will get stuck in between rounds of Breakthrough when the game tries to transition to the next map. Players can get around this by quitting from the current game and re-joining a Breakthrough match through Matchmaking.

An issue that is still investigated where players, even with perfect aim, perfect range, and a generally smooth experience throughout an entire match will not have their hits register against opponents.

After Update #3 went live, some PC players had no horizontal movement when using the mouse. Fix is to restore default settings through the deletion of PROFSAVE files in the Battlefield 2042/Settings folder in My Documents.

Error Codes and Bugs Message Board

There have been many reports of bugs and error codes affecting a player's ability to connect or play Battlefield 2042. Join the message board below and share any error codes and bugs that we may have missed!

In order for us to make the best articles possible, share your corrections, opinions, and thoughts about 「How to Fix All Error Codes, Bugs, and Known Issues | Battlefield 2042」 with us!