This is the character page for Martin Sandwich from the game Resident Evil Resistance. Read on to learn more about Martin, his background, and his skills!

Martin Sandwich is an extremely skilled mechanic who found employment at a medical appliance manufacturer. However, when he was deployed to do repairs at the Spencer Memorial Hospital, he came across a hidden testing facility and was forced to take part in a horrifying virus experiment. 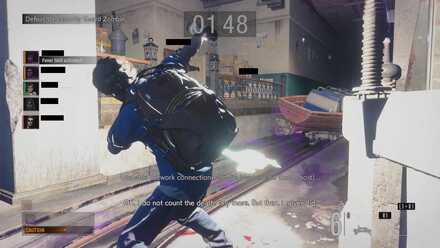 Martin's skills make him a master at controlling the objects in an area. His skills allow him and his teammates to have some space to work with regardless of the number of enemies in the area. Flash Baton can be used to temporarily paralyze enemies, including Bioweapons, to give his team some breathing room.

He can also combine his skills Makeshift Mine and Sapper to hijack mines planted by the Mastermind to replace them with his own.

Since handling traps are Martin's specialty, you should always be aware of the ground in-case there are any traps. Traps that have been hijacked by him can become a great asset especially if the Mastermind is trying to swarm the team with zombies.

You are incharge of controlling the chaos in the area

Due to Martin's skill set, his strength comes from controlling the chaos in an area with his skills. He can lay down or hijack traps to deal with multiple zombies at once or he can also use his Fever Skill, Flash Baton, to quickly paralyze every enemy and give him and his team a chance to escape.

The recommended skill variants you should equip should rotate around Martin's ability to control an area.

Below are the skill variants you should equip to maximize Martin's potential:

The recommended equipment you should have revolves around your own survivability while trying to support the team by controlling the area.

Below is the equipment you should have to make Martin a master of controlling the area:

Register as a member and get all the information you want. (It's free!)
Login
Opinions about an article or post go here.
Opinions about an article or post
We at Game8 thank you for your support.
In order for us to make the best articles possible, share your corrections, opinions, and thoughts about "Martin Sandwich - Skills and Strategy" with us!
When reporting a problem, please be as specific as possible in providing details such as what conditions the problem occurred under and what kind of effects it had.