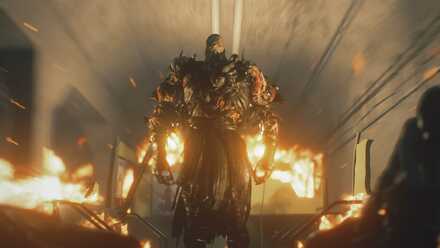 This page contains a walkthrough for each battle with Nemesis in Resident Evil 3 (Remake). For more information, select from one of the battle walkthroughs below and learn which weapons you should use, as well as how you should fight Nemesis.

★ Watch out for his triple punch!

The thing that you need to look out for above all is Nemesis's left hook, right hook, left hook triple punch. If you get cornered into a wall or narrow space, you won't be able to dodge his attacks easily, making it very easy to get caught in this. If possible, try to stay in more open areas.

★ Getting grabbed at low HP is especially dangerous

If Nemesis manages to grab you when you have low HP, there is a very high chance that you'll die. Make sure to use an herb or first aid spray to restore your HP if it gets into the orange or red.

How to Fight Nemesis 1st Form

★ Dodging the Dash + Attack from Nemesis is essential

The hardest attack to dodge from Nemesis's second form is the one where he rushes in and hits a large aread of ground right after. Getting the timing on your perfect dodges correct is essential. If you dodge right when Nemesis (2nd Form) lands on the ground, you should be able to avoid its attack.

The thing you really have to watch out for is the attack where it bites your stomach right after grabbing you. Compared with its other attacks, this one has enormous damage output, so its the move that you should be vigilant of above all others. This move starts with Nemesis jumping in from far away, so make sure to keep your distance and keep making use of perfect dodges.

How to Fight Nemesis 2nd Form

After hitting Nemesis with electricity to deal damage, the power unit will become out of reach, and you'll need to move in again. Here you'll want to use a Handgun or Magnum for more precise aiming so you can target the orange spots on Nemesis's body. If you destroy all of these, you can make Nemesis flinch, allowing you to avoid getting one-shotted by Nemesis when you are trying to move back in to the power unit.

How to Fight Nemesis (Final Form)

Should You Fight Nemesis?

Do you get items for fighting it?

In the original Resident Evil 3, when playing on Heavy Mode, you would get some use loot for temporarily knocking Nemesis out. You could obtain an upgraded handgun and infinite ammo this way, and the remake has a similar bonus for taking him out.

However, Nemesis will be very hard to take out in the beginning, so it is recommended to first get better weapons and get used to the game's mechanics.

Which Difficulty Should You Choose?

In the origal RE3, you had the option to avoid battle with Nemesis and flee from battle. However, since his HP would carry over, if you continuously chose not to fight him, a later battle with him would become very difficult.

However, the Live Selection feature is no longer present in the remake, so you don't need to go out of your way to fight him.

A tenacious BW hunting down Jill 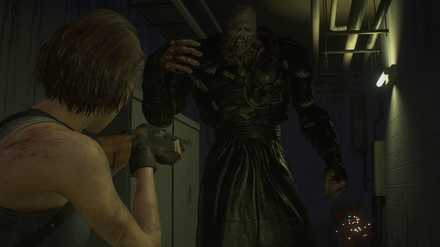 Nemesis is a Bio-Weapon designed for the sole purpose of hunting down and killing S.T.A.R.S. members, including the protagonist, Jill. In the remake, he is nearly always around the corner, and is so important to the story that he could be considered one of its characters.

Nemesis is an upgraded version of the Tyrant creatures from the previous titles, who is know intelligent and can carry out a mission in addition to being extremely powerful. It has an incredibly strong body which cannot be damaged by attacks from weaker weapons.

>>64 I was hoping we could kill him without using the rail gun in his final form. That would be sick.

>>63 That's right. I used the explosive rounds and luckily, I popped two of the that are close to each other.

Register as a member and get all the information you want. (It's free!)
Login
Opinions about an article or post go here.
Opinions about an article or post
We at Game8 thank you for your support.
In order for us to make the best articles possible, share your corrections, opinions, and thoughts about "All Nemesis Battle Walkthroughs" with us!
When reporting a problem, please be as specific as possible in providing details such as what conditions the problem occurred under and what kind of effects it had.