This is the character page for Tyrone Henry from the game Resident Evil Resistance. Read on to learn more about Tyrone, his background, and his skills!

Tyrone Henry works for the Raccoon City Fire Department. However, during his duty to fight a fire at an Umbrella factory, he suddenly disappeared and was reported killed in the line of duty. 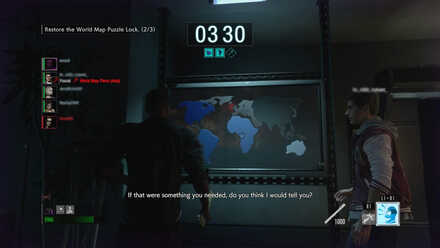 Tyrone has the most health out of all of the survivors. Make sure that you are the frontliner of the team and use your Rally to boost the morale of your teammates when clearing up rooms and opening new areas.

Use your Power Kick on stronger enemies like Lickers and enraged zombies to deal with them much quicker. Focus on picking up Yellow Herbs and Repair Kits since you will be mostly using melee weapons to give more ammo to the other survivors.

Always be in the vanguard

When using Tyrone you should always make sure that you are at the front of the team. You can use your Power Kick to stun zombies and Bioweapons. You also have the highest door-ramming power to open locked doors and make a path for your team to move forward.

Never lose sight of your team

Even if Tyrone's job is to be in the vanguard, you should never lose sight of your team since your job is to soak up the damage to make sure your team survives. If you left your team to play solo, then they will easily die on their own without you supporting them with your buff.

The recommended skill variants you should equip should rotate around Tyrone being the frontline tank that is always standing to help your teammates.

Below are the skill variants you should equip to maximize Tyrone's potential:

The recommended equipment you should have revolves around having a balance of being the frontline tank and supporting your teammates.

Below is the equipment you should have to make Tyrone the most effective tank:

Register as a member and get all the information you want. (It's free!)
Login
Opinions about an article or post go here.
Opinions about an article or post
We at Game8 thank you for your support.
In order for us to make the best articles possible, share your corrections, opinions, and thoughts about "Tyrone Henry - Skills and Strategy" with us!
When reporting a problem, please be as specific as possible in providing details such as what conditions the problem occurred under and what kind of effects it had.