This is the character page for Samuel Jordan from the game Resident Evil Resistance. Read on to learn more about Samuel, his background, and his skills!

Samuel Jordan is a professional boxer who sustained a career-ending injury during a boxing match. Desperate to make a come back in the ring, he took part on a new medical trial hoping to heal his injuries. No one has heard from him ever since. 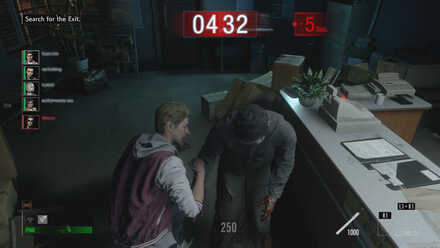 Samuel is best suited to fighting in close quarters because of his ability Brawler. Make sure that you are in front of your team to deal maximum damage and to protect them from being attacked. Fists of Iron is an excellent skill when dealing with large amounts of enemies to clear rooms much faster. Use your Dash Punch to close the gap between you and your enemies and land your melee attacks much easier.

Samuel's specialty is being a very strong melee combatant. Guns and ammo will be wasted on him, so it is better to drop any ammo you pick up for your teammates to use.

You are the MVP in Area 3

When the survivors reach Area 3, you will become the most important survivor in the team. It will become your job to break the Bio-cores since they take extra damage from melee attacks.

The recommended skill variants you should equip should rotate around increasing Samuel's damage and survivability while having Fists of Iron active as much as possible.

Below are the skill variants you should equip to maximize Samuel's potential:

The recommended equipment you should have revolves around increasing Samuel's damage and survivability as a front line combat unit.

Below is the equipment you should have to make Samuel stronger:

>>74 I tried playing Samuel and the damage reduction is very obvious. Please buff Samuel on the next update. He became useless.

Register as a member and get all the information you want. (It's free!)
Login
Opinions about an article or post go here.
Opinions about an article or post
We at Game8 thank you for your support.
In order for us to make the best articles possible, share your corrections, opinions, and thoughts about "Samuel Jordan - Skills and Strategy" with us!
When reporting a problem, please be as specific as possible in providing details such as what conditions the problem occurred under and what kind of effects it had.