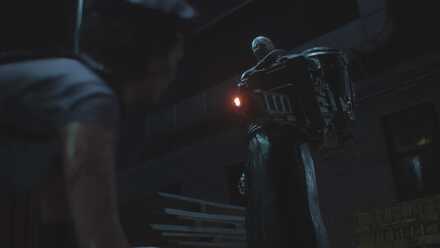 This is a walkthrough for fighting with the first form of Nemesis in Resident Evil (Remake). Here we will cover tips on dealing with Nemesis's 1st form, as well as the types of attacks he can use with his flamethrower. Additionally, we will show the changes between the original Nemesis and the Remake.

★ Watch out for his triple punch!

The thing that you need to look out for above all is Nemesis's left hook, right hook, left hook triple punch. If you get cornered into a wall or narrow space, you won't be able to dodge his attacks easily, making it very easy to get caught in this. If possible, try to stay in more open areas.

★ Getting grabbed at low HP is especially dangerous

If Nemesis manages to grab you when you have low HP, there is a very high chance that you'll die. Make sure to use an herb or first aid spray to restore your HP if it gets into the orange or red.

The attack you really need to look out for is the one where he holds the flamethrower and charges forward. When you see him holding back the flamethrower, he is gearing up for this attack, so do a Quick Turn and create some distance, or use a Perfect Dodge to avoid the attack.

★ Watch out for the explosion

Although the range of the attack is not all that big, the attack where Nemesis makes an explosion on the ground will deal a ton of damage if it hits you. The motion before he does this move is pretty fast, so it is hard to avoid, but it won't deal any damage if you keep out of its range, so the best advice is to keep your distance during the battle.

Head and Heart are his weakpoints 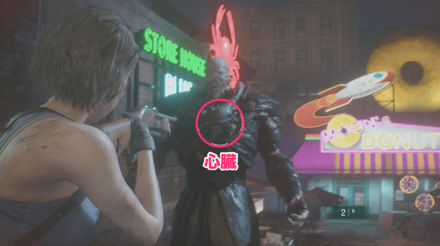 Like regular zombies, Nemesis's head is a weak spot, and in addition, so is its heart. Its heart is easy to target, but it will be guarded while it is making attacks, so if you don't have a clear shot, aim for a headshot.

Throw a grenade at the start

If you throw a grenade right when the battle begins, you will be able to inflict damage to Nemesis and simultaneously take out the enemies that show up. Nemesis won't be knocked out completely, but it will stall him for a bit, so you should go for it.

You need to keep Nemesis in your field of vision

If it gets too far away, Nemesis will attack with its tentacles or by sliding in quickly. To avoid this, you need to keep Nemesis in your sights. When you see tentacles coming out of his arms, the attack will begin, so do a Perfect Dodge when he extends them to move around without getting hit.

You must do perfect dodges to take him out

Every attack from Nemesis deals a lot of damage, so you have to make use of perfect dodges if you want to survive. You'll be rewarded with a counterattack each time you successfully pull one off, so try and get as many as you can.

How to do a Perfect Dodge

Don't miss your shot when countering

In the second battle with Nemesis, he will often dodge your attacks when you fire with the Grenade Launcher. You'll need to time your Perfect Dodges just right and use your counterattack to hit him with your grenade launcher. You won't have much time, so be sure not to miss!

How to do a Perfect Dodge

Attack his gas cylinder when he flinches!

Nemesis will flinch for a couple seconds when an attacks hits him, so you'll want toe aim for the gas cylinder on his back. Use a Grenade Launcer or Shotgun to hit it and deal heavy amounts of damage.

Since there is an electrocuter nearby, you should constantly use it to make him flinch. 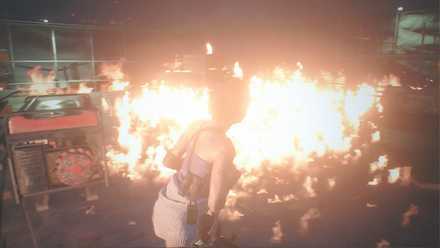 If you enter areas that Nemesis set ablaze with the flame thrower, you'll take some damage. Also, when Jill flinches from the fire, you won't be able to Perfect Dodge, so you are better off staying away.

Get all the items before finishing Nemesis off 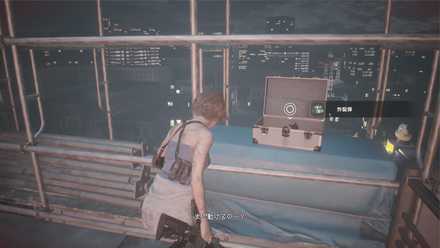 After defeating Nemesis heere, a cutscene will trigger, and you will move, after which you will be unable to return. Be sure and take all the items in the area before the battle ends if you want them.

In order to get all of the items here without taking any damage, you'll need to make heavy use of quick turns and perfect dodges, and keep Nemesis in your sights to avoid a surprise attack.

Much quicker and more weapons at his disposal 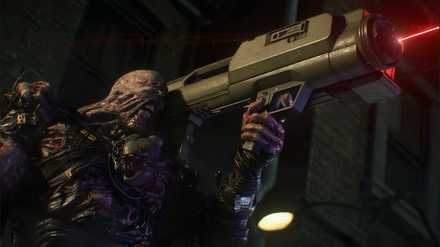 Compared to Nemesis from the original, this one moves very quick, and can show up out of nowhere while you are trying to run away. In addition, he has several weapons in his arsenal now, such as his rocket launcher and flamethrower, so this game feels tougher than even RE2.

The 1st Form can use tentacles 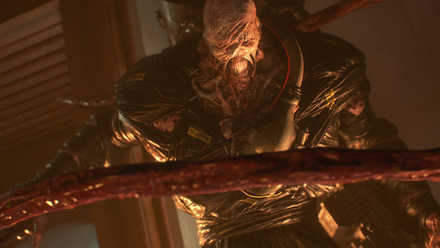 In the original, Nemesis's 1st Form would only attack with the rocket launcher, but in the remake, the 1st Form can also perform tentacle attacks. In the original, this was something that started with the 2nd Form.

Compared to the original, Nemesis's face is a bit longer and skinnier, and his body is somewhat slimmer too. Despite this, he is possibly even stronger than before, and is still every bit as threatening.

Register as a member and get all the information you want. (It's free!)
Login
Opinions about an article or post go here.
Opinions about an article or post
We at Game8 thank you for your support.
In order for us to make the best articles possible, share your corrections, opinions, and thoughts about "How to Fight Nemesis (1st Form)" with us!
When reporting a problem, please be as specific as possible in providing details such as what conditions the problem occurred under and what kind of effects it had.