How to Defeat Adrammelech - Espers | FF12

This is the article page and guide for Adrammelech, the Wroth in the game Final Fantasy XII: The Zodiac Age (FFXII, FF12, FF XII Zodiac Age). Information on where the Esper is, how to get them, and what skills they unlock are discussed here.

How to Defeat Adrammelech 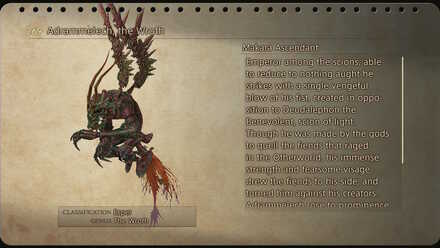 This boss, fought in the Zertinan Caverns, isn't without his allies; while he is a pretty formidable opponent, he also plays dirty by summoning underlings. The cave is filled with Shambling Corpses and they can be a pain to deal with along with the Esper. Make a conscious effort to avoid these corpses while moving toward a fairly unpopulated area. Once you're in the clear, you should start pounding on Adrammelech.

Adrammelech is no pushover, although he does like to use Lightning spells; a Diamond Armlet or a similar Lightning element-negating gear can make this battle easier. Along with this. the Esper is also weak against Ice. Blizzara and similar attacks should make this battle quicker, if not easier. Make sure to watch out for his Thundaja attack, which damages everyone in the party. Also make sure to reserve your Quickening chain for the very end, and you'll have this Esper in your party in no time at all. 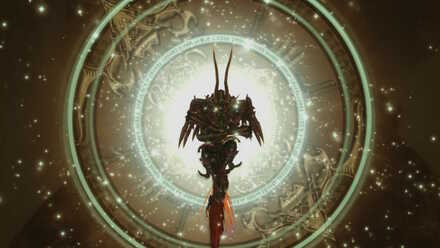 *Note: Data is meant to reflect Adrammelech's stats at Lv.39

Adrammelech cycles through any of the spells above at the start of the fight. If you bring him down to 80% to 50% HP, however, he'll start randomly using his unique spells. 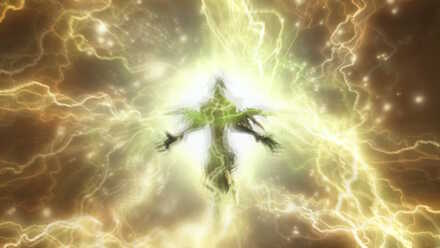 Once defeated, Adrammelech will be added to your summon party. You'll also get access to any of these skills:

Adrammelech - Benefits of Use 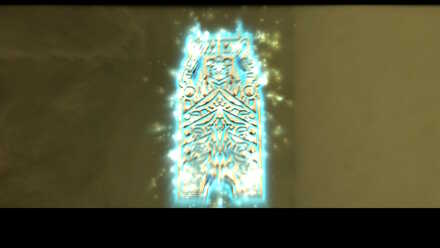 Adrammelech, the Wroth, betrayed the gods by making himself Emperor of the Otherworld that he was put in charge of. Instead of ferrying souls, he took control of them to join Ultima's rebellion. This makes him a powerful opponent that uses Lightning-attacks. He is a perfect foil against enemies who are aligned with the Water element and even Ice-aligned enemies who are susceptible to Lightning-based attacks.

Aside from that, his Bleed attack is a handy tool to finish battles quickly, as it inflicts the Sap status on an opponent; pretty painful if it's used against you, but if you use it against your enemies, it's a pretty powerful spell. His Technick, Perfect Defense, is another powerful tool in your arsenal, as it negates any attack for a short period of time, enabling you to attack without fear of reprisal. His cost to activate on your License Board is around 25 LP, and he is an easy summon, requiring only one Mist point to activate.

Register as a member and get all the information you want. (It's free!)
Login
Opinions about an article or post go here.
Opinions about an article or post
We at Game8 thank you for your support.
In order for us to make the best articles possible, share your corrections, opinions, and thoughts about "How to Defeat Adrammelech - Espers" with us!
When reporting a problem, please be as specific as possible in providing details such as what conditions the problem occurred under and what kind of effects it had.