All Secrets and Unlockables | Hyrule Warriors: Age of Calamity 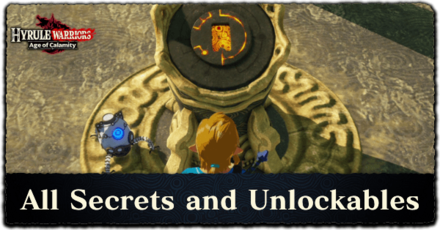 This is a guide to all secrets and unlockables in Hyrule Warriors: Age of Calamity. Read on to learn the game's secrets, as well as all unlockables and easter eggs! 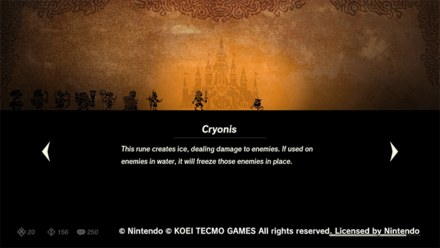 Press the L and R buttons to move Terrako around on the loading screen. You can also press the B button to make him jump.

You can also find the number of completed Story Chapters, Challenges, and Quests on the lower left corner of the screen, much like the number of shrines completed shown in a similar spot in Breath of the Wild. 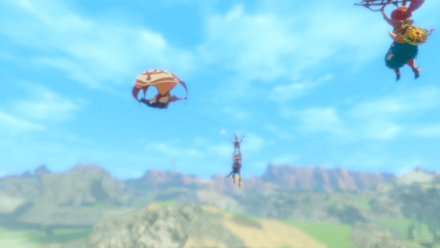 When embarking on a story chapter, Link may sometimes use a Cucco instead of his paraglider to glide to the destination.

This is a reference to a gameplay mechanic in previous Zelda games wherein Link can pick up a Cucco to jump and glide down to an area.

Link Usage Guide, Builds, Combos, and How to Unlock 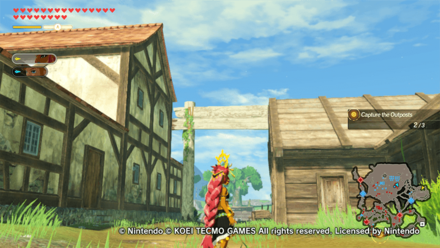 You can find a ranch on the eastmost area of the map on Chapter 1: The Battle of Hyrule Field that bears striking resemblance to the Lon Lon Ranch in The Legend of Zelda: Ocarina of Time.

You can also find this area, named Ranch Ruins, in Breath of the Wild. 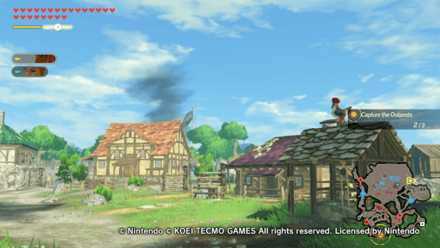 Similarly, you can also find an unnamed village near the ranch that closely resembles the Mabe Village in The Legend of Zelda: Link's Awakening.

Much like the ranch, you can find this area, named Mabe Village Ruins, in Breath of the Wild. 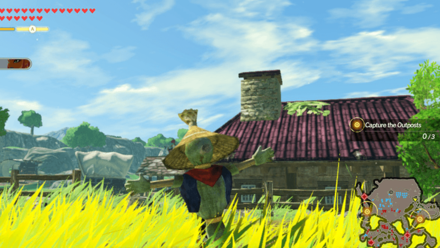 Near Mabe Village, you can find scarecrows wearing a straw hat, a bandana, and a vest. These resemble the scarecrows, Bonooru and Pierre from The Legend of Zelda: Ocarina of Time.

As Long as You Have Enough Rupees 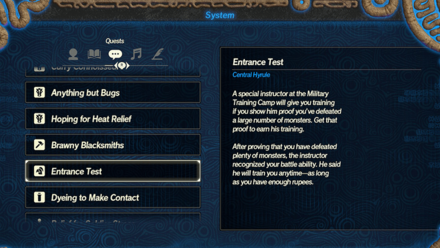 Upon completing the Entrance Test quest, the instructor remarks that he will train you anytime—as long as you have enough rupees.

The line is a reference to Link: The Faces of Evil. In the game, you can find a character named Morshu that sells items. Interacting with him triggers a cutscene with the following dialogue:


"Lamp oil, rope, bombs - you want it, it's yours, my friend, as long as you have enough Rubies." 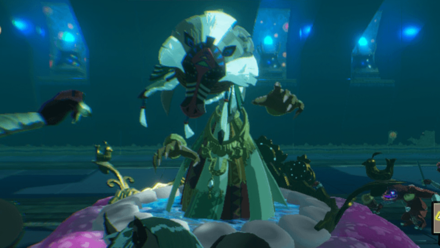 When performing a Weak-Point Smash as the Great Fairies, the Horse God may appear from the flower instead to finish off the enemy.

Originally from Breath of the Wild, the Horse God, known as Malanya, resides in a fairy fountain spring and has the power to revive horses that have been killed.

Great Fairies Usage Guide, Builds, Combos, and How to Unlock 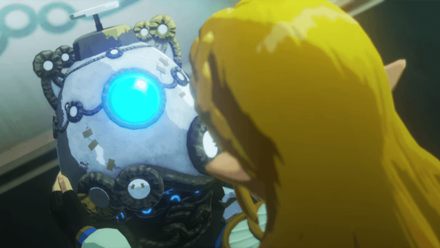 First heard in A Link to the Past, the song plays whenever Zelda appears. In some games, Link plays this tune to solve puzzles in dungeons.
Zelda Usage Guide, Builds, Combos, and How to Unlock 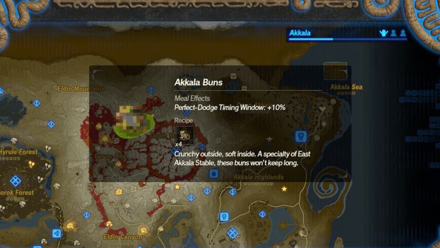 In Breath of the Wild, Akkala Buns is a type of food that Link can buy at the East Akkala Stable. Unlike most food items, the game does not physically show what the food is and only describes it as being made of fresh ingredients.

Age of Calamity reveals the mystery behind this food item: Four Tireless Frogs are needed to create Akkala Buns!

Akkala Buns Meal Effects and How to Unlock

Much like in Breath of the Wild, you can find glowing blue rabbits called Blupees on the battlefield. They can be found in set locations randomly and will quickly run away when you get close to them. 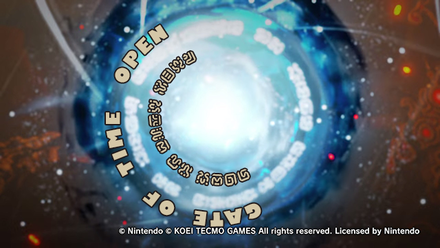 In the opening cinematic for the game, as the Diminutive Guardian whistles a tune and opens a portal, we can see Sheikah Text floating around the portal.

By rotating the text, we can see it spells out Gate of Time Open. This is a reference to how the Guardian will embark on a journey across time to help Princess Zelda save Hyrule.
Terrako Usage Guide, Builds, Combos, and How to Unlock 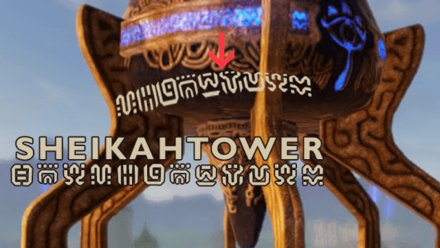 As the game loads in from the title screen, we can catch a quick glimpse of some Sheikah Text along the top of the tower. The visible characters spell out ikah Tower.

It would be safe to assume that the complete text would say Sheikah Tower. In this game, the Central Tower serves as the main hub for the Champions before they embark on the different story missions and challenges.
Story Walkthrough: List of Chapters 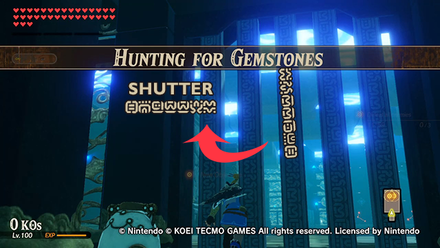 When you enter challenges that take place in shrines, you might notice some Sheikah Text on the bars of the entrance to the trial room. When rotated clockwise, these repeatedly spell out Shutter. This could refer to shutter gates which tend to open and close vertically.
List of Challenges: Battlefield Specific Materials and Main Enemies For All Missions 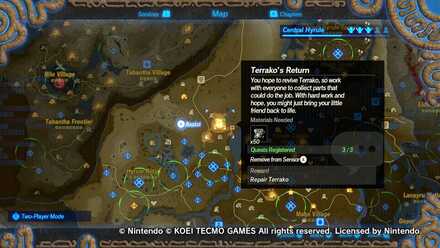 After completing Chapter 7: The Future of Hyrule, a series of quests and challenges will appear on the map. These let you repair and unlock Terrako as a playable character and view the game's Secret Ending.

Ending Explained: How to Unlock the Secret Ending

You can unlock the Hyrule Warrior's Outfit as a reward for completing the game 100 percent. Fans of the first Hyrule Warriors game will remember this outfit as Link's outfit from that iteration. 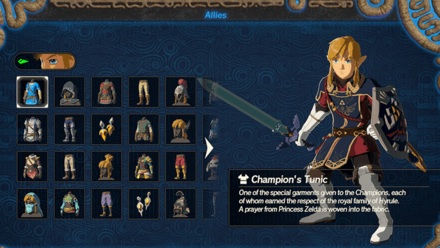 Complete story chapters, quests, and challenges to unlock outfits that Link can wear and also outfits for Zelda and the four Champions. 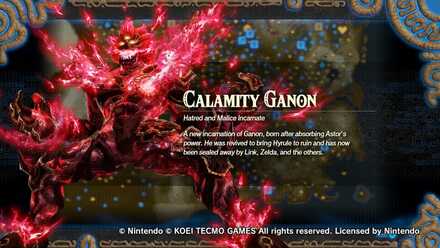 There are four Secret Characters in the game that are unlocked by completing specific character exclusive quests.

These characters include: The Great Fairies, Monk Maz Koshia, Terrako, and Calamity Ganon.

If you have the DLC Expansion Pass, the Battle-Tested Guardian is another secret character that can be unlocked through a series of quests. 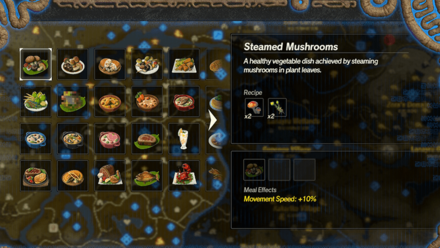 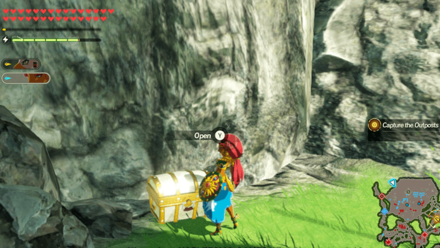 Often in battle, you can find treasure chests hidden on the map that contain materials or weapons.

Unlike the other unlockables mentioned above, unlocking all treasures chests is not required to reach the game's 100% completion rate.

In order for us to make the best articles possible, share your corrections, opinions, and thoughts about 「All Secrets and Unlockables | Hyrule Warriors: Age of Calamity」 with us!