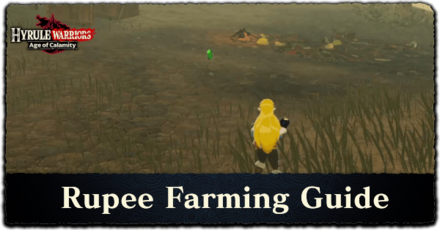 This is a guide to farming Rupees in Hyrule Warriors: Age of Calamity for the Nintendo Switch. Learn the different methods of how to farm rupees quickly, as well as the various ways you will need to spend your rupees.

How to Farm Rupees

The fastest way to get quick Rupees is by completing the challenges and battles as fast as possible and by defeating a lot of enemies. You will collect rupees from enemies you take down as well as from crates, barrels, and treasure chests you find on the map.

Barrels and crates only drop low amounts of rupees so it is not recommended to go out of your way for them. Also, take note that these Rupees will automatically be obtained even if you don't actually pick them up, so you can focus on attacking enemies while breaking barrels and crates. 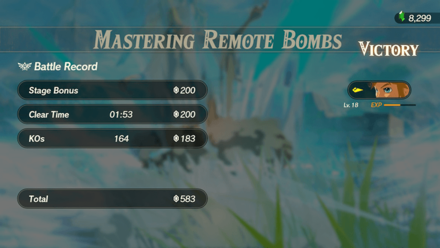 You also gain rupees at the end of each battle, in the form of Clear Time and Enemies Defeated bonuses. Clear maps quickly, taking out a high number of enemies to get the most rupees possible.

The maximum amount you can earn for Clear Time and KOs is 200 Rupees.

Use Rupee Bonuses from Cooking Beforehand 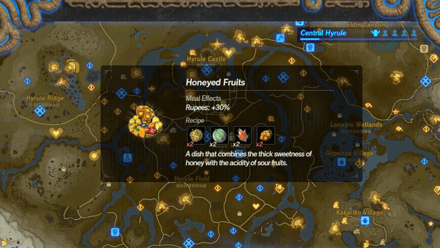 Certain cooking recipes will give you additional rupees in battle when you use them. Recipes like Honey Candy gives you 20% more Rupees while Honeyed Fruits and Honey Crepe give you 30% more Rupees. Once you have three slots for Cooking, you can stack these meal effects to get a total of 80% bonus!

If you're up for the challenge, you can cook Dubious Food to get 100% more Rupees but at the cost of -20% Max Health. 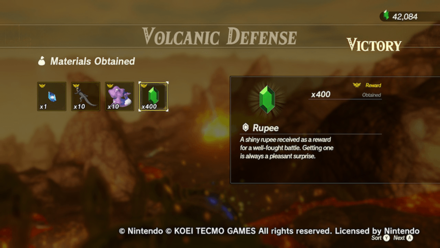 Completing Divine Beast Battles on the map allows you to receive up to 400-700 Rupees depending on the battle. Note that this amount falls under First-Clear Rewards so you can only obtain it once per completed battle.

In addition to Divine Beast Battles, several other Challenges allow you to obtain rupees as a first time clear reward. Here is the full list!

Sell Weapons at the Blacksmith 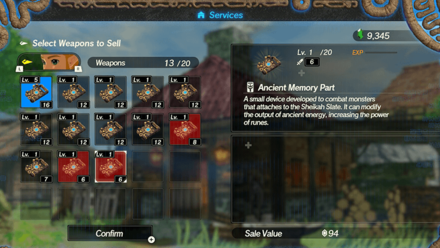 Another way of farming for quick Rupees is selling weapons at the blacksmith. You can easily get 200-500 Rupees depending on the weapon with this method.

How to Unlock the Hylian Blacksmith Guild

Additionally, you can sell your unwanted Materials to shops or merchants. Some merchants even offer up to 2.5x bonus rupees for certain material types, so sell to them to get the most of your materials!

Scan amiibos to Get More Weapons and Materials 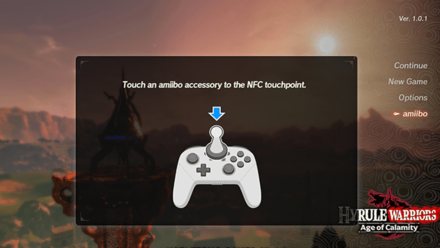 Scanning any amiibos you have lying around to collect weapons and materials, which you can sell for rupees. If you have reached the five amiibo cap, you can repeatedly change the date and scanning to keep receiving more rewards for easy money!

Just note that you'll need to collect your rewards before scanning more amiibo.

amiibo Support | amiibo Rewards and How to Use

There are a few quests that earn you rupees as a first time reward. Although the rupees are normally only obtainable a single time, the Material Quest The Master Chef can be repeated, allowing you to trade in your excess Mighty Bananas for tons of rupees!

Offering Help on the Road 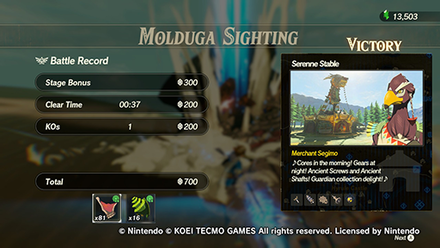 Molduga Sighting is an easy and consistent way to farm rupees. The mission is quick enough that it can be finished in less than a minute or two. It is also available early on which can be helpful for newer players.

To maximize the earnings, we suggest selling the Molduga Fins and Molduga Guts you get to Segimo to take advantage of his merchant bonus. Each run should last for a minute or two and net you about 1,350 Rupees. 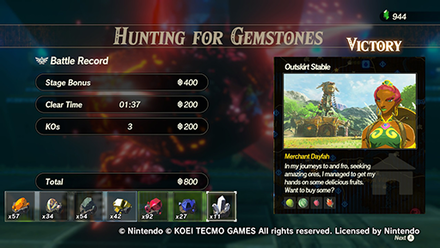 This mission is another solid option for quick Rupee Farming and is available later on in the game. You will have to defeat a Luminous Stone Talus, a Rare Stone Talus, and a Malice Igneo Talus. So it is recommended to use more powerful characters to clear the challenge in a shorter time.

Depending on your luck, you can get a variety of ores that can be sold for lucrative amounts. To maximize earnings, we suggest selling the ores to Dayfah to take advantage of her merchant bonus. Each run should last about 2-5 minutes and you can expect about 2,000 Rupees. 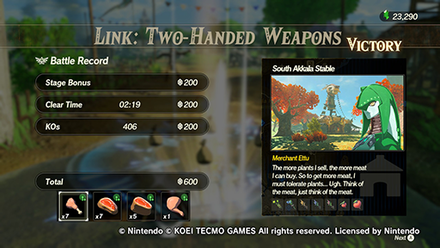 This is another early mission that nets a decent amount of rupees. Although, it requires you to use Link with a Two-Handed weapon.

This challenge offers various types of meat as Battlefield Drops. To maximize the earnings, we suggest selling the various meat drops to Ettu to take advantage of his merchant bonus. Each run should last under four minutes and net you about 1,000 Rupees. 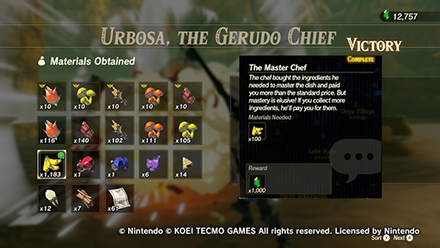 This mission is the earliest mission to farm quick Rupees but takes a lot longer than the others. Check out our Mighty Banana farming guide to see how to collect a large amount of Mighty Bananas which can then be used to trade with the Master Chef in the Gerudo Region.

The Master Chef will trade 1,000 Rupees for 100 Mighty Bananas. You can max out your inventory by playing through Urbosa, The Gerudo Chief. Each run should last about 20 minutes and net you about 10,500 Rupees.

Keep in mind that if you farm more than the inventory limit (x999), each extra Mighty Banana will be automatically sold for the default price of 5 Rupees each.

Where to Use Rupees

You can use rupees to buy materials from various shops and merchants in Hyrule, which will allow you to complete quests and gain more power ups.

Quests Rupees Are Used For 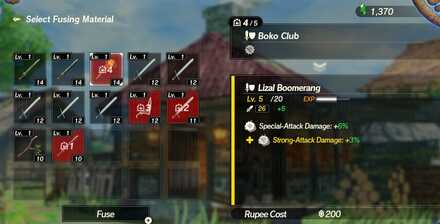 You'll have to use up rupees any time you want to power up your weapons through weapon fusion. This can end up using a lot of your hard earned rupees, so be sure to have plenty of them before leveling up your weapons too much! 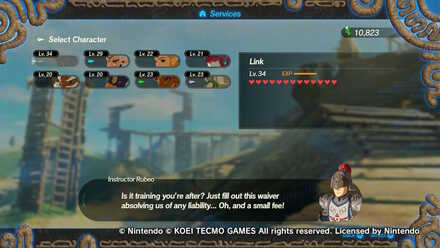 After unlocking the Military Training Camp, you can use rupees to level up characters. Once you start reaching higher levels, each level up consumes more and more rupees, so be sure to go in with plenty!

Also note that you can only level up characters at lower levels that your highest level character, so you'll need to level grind the old fashioned way for at least one character.

In order for us to make the best articles possible, share your corrections, opinions, and thoughts about 「Rupee Farming Guide: How to Get Rupees (Money) Fast | Hyrule Warriors: Age of Calamity」 with us!