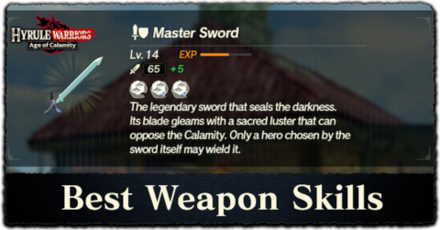 A tier list for the best Weapon Skills (seals) in Hyrule Warriors: Age of Calamity for the Nintendo Switch. Read on to learn which seals to use when fusing weapons, as well as the best weapon skills for each character!

You can get the highest possible value of a Weapon Skill by finding seals with a ++ symbol on them. These seals are rare and are usually found in late game Battles and Challenges. Remember that you can further increase the value of a skill by having matching seals on the same weapon!

You can also remove unwanted seals from a weapon if you're going to replace it with a better seal or a different one after completing the Secret of the Rito Artisans and Caring for the Statues Quests.

Keep a Separate Weapon for Farming

If you're planning on getting Weapon Skills that are good for farming Materials (Drop Rate increase), we recommend having a separate weapon to transfer all your farming seals into so that you can have all the slots you need for your main weapon. This same logic applies for using the EXP Up skills: You should build a weapon specifially for leveling up one character.

These skills increase the drop rate of materials that you are actually looking for. Most of the parts needed for completing Quests are monster parts and battlefield-specific materials, so these are must-have seals for farming.

Strong-Attack Damage and Regular-Attack Damage skills boost your raw power, since your attacks cycle mostly between regular and strong attacks. Stack these skills together on a same weapon to quickly demolish enemies.

Attack Speed skills are good for characters, especially slow ones like Daruk, that can force weak-points out of enemies with their combos.

Perfect-Dodge Timing Window increases your chance of performing a Flurry Rush, which lets you hit an enemy multiple times and interrupt its attack, also increasing the amount of weak point smashes you can perform.

The Battle EXP should be given to your main character (the one who you use the most) to increase the level cap of the Military Training Camp, then just have your low level characters to reach the cap using Rupees.

The only reason the Ancient-Part Drop Rate skill is separated from S-Tier is that ancient parts are too specific, and there aren't many Guardians around in many parts of the game. It will be better to just buy them from merchants and use the slot for another skill.

Damage per 100 KOs could match S-Tier combat seals if monsters are scattered around the map and you have the time to clear them out to stack the damage boost.

You don't really need to waste a slot for Material Drop Rate from Grass as these materials can also be obtained from chests and shops.

These Weapon Skills are very situational and are hard to use, especially Damage at Full Hearts. Dodging is better since you can also execute a Flurry Rush if you dodged perfectly so you can discard the Chance to Automatically Guard skill.

However, it is worth noting that Damage at Full Hearts does have good synergy with the Master Sword, which can fire beams at full hearts. It is also good in One-Hit Failure Challenges, though aprt from these uses, its utility is somewhat limited.

Midair-Attack Damage skills are only good for Revali since most of his upgrades extend his midair combo and Mipha who can follow up her unique ability with midair attacks.

You'll have more than enough healing items on easier levels unless your character is underleveled. If you need more healing, you'd be better off using your weapon slots on skills that increase your damage. Again, if your Master Sword is built around keeping full health, it can be useful, but apart from that, you can usually skip on this weapon skill.

Even though their seals look cool, Reduced Damage from Ice/Fire aren't really useful, since almost all levels consist of enemies infused with different elements. If there is a particular elemental enemy that is giving you trouble, you could use these skills, but overall, they are too niche to put on a main weapon.

Damage from Enemies makes you tanky, yes, but you'll probably land more strikes than your enemies can so you can safely ignore this Weapon Skill. Besides, by the time you can get your hands on ++ weapon seals, you will likely have enough hearts on each character you use to allow you to get away with taking a few hits.

See more comments (6 Comments)
Opinions about an article or post go here.
Opinions about an article or post
We at Game8 thank you for your support.
In order for us to make the best articles possible, share your corrections, opinions, and thoughts about "Best Weapon Skills (Seals)" with us!
When reporting a problem, please be as specific as possible in providing details such as what conditions the problem occurred under and what kind of effects it had.