How to Get the Hylian Shield | Zelda: Breath of the Wild (BotW)

The Hylian Shield is the strongest and most durable shield in The Legend of Zelda: Breath of the Wild (BotW). Learn where to find the Hylian Shield and how to repair the shield again if it breaks or has been lost. 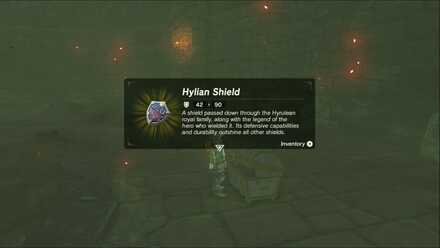 With a Durability of 800 and a Defense of 90, the Hylian Shield is the best shield in the game. It can be found in the Lockup of Hyrule Castle after defeating a Stalnox.

How to Get the Hylian Shield 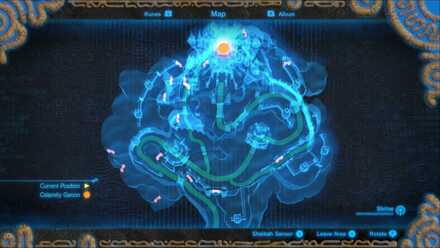 The Lockup is located on the furthest west basement floor of Hyrule Castle. You do not have to complete any particular quest or have fill any prerequisite to get the Hylian Shield, however, you will need to get to the Lockup and defeat the Stalnox guarding it to get the shield. 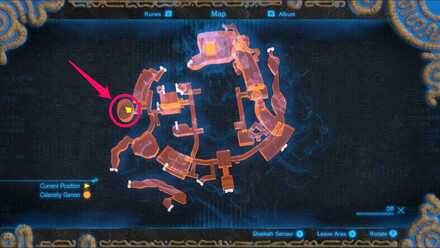 The Fastest Way to Get to the Lockup 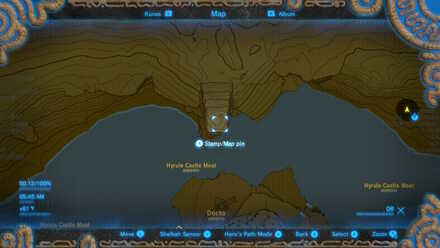 The fastest way to get to the Lockup is by gliding to the Docks from the pillar north of Hyrule Castle. 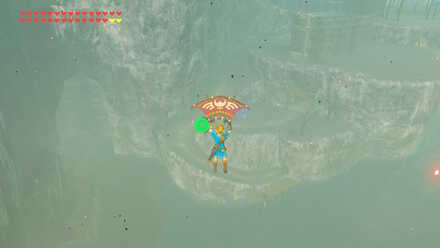 You don't need to climb the pillar itself. Simply head up to the base of the pillar, use Revali's Gale, and glide north from the pillar. 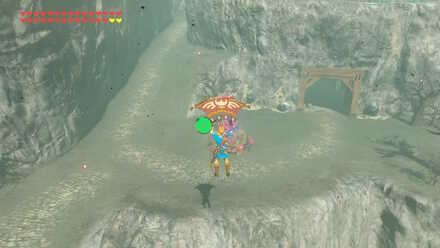 You'll eventually see the cliff edge with a Decayed Guardian close to the entrace of the Lockup. You can easily spot this at night as the ore deposits have Luminous Stones and will glow. Avoid or destroy the Decayed Guardian and head into the Lockup Gate. 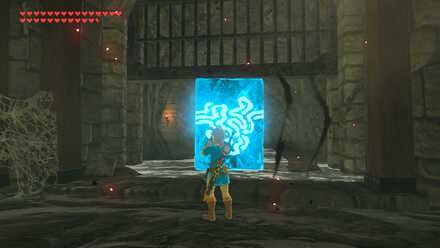 Once inside, use Cryonis on the patch of water to lift the gate.

Other Ways to Get to the Lockup 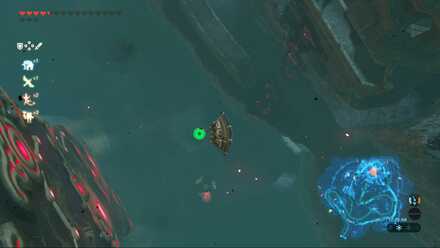 One way to get there is to use Revali's Gale to glide across the lake from the southwest near the giant pillar located north of Castle Town Prison.

After taking flight, look for a cave on the lower level of the island with Luminous Stones next to it. 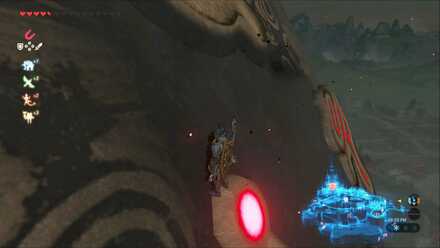 If you do not have Revali's Gale yet, you can try climbing the pillar in the southwest mentioned in the previous suggestion. It will take some effort to climb, as Link will have trouble grabbing the wall and will start to slide down at some points since the pillar is sloped. Aim for the edge of the designs on the pillar where it dips in a little, and that should keep Link from sliding. You do not actually need to climb very high, just high enough to glide across to water. 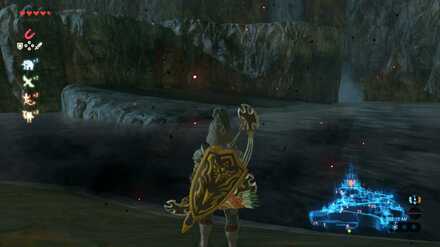 Right under the southwest pillar, you can also swim across, as it is not a far gap. However, the water current will try to sweep you away. If you have enough stamina you can just fast swim across as well, perhaps using the Zora Armor if you have it. 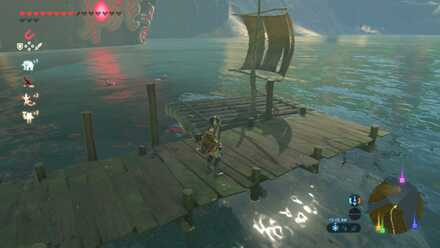 Another method of crossing the water is to access the raft near the Castle Town Prison and use a Korok Leaf to raft over to the castle and get to the main entrance to the Lockup, gaining access by using your cryonis ability to lift the gate. 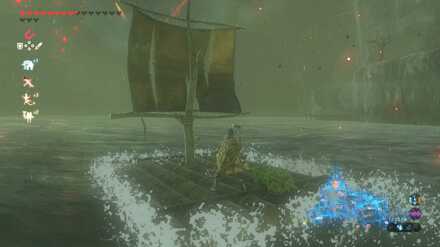 The Lockup gate is guarded by a Decayed Gurdian Stalker, so be careful. 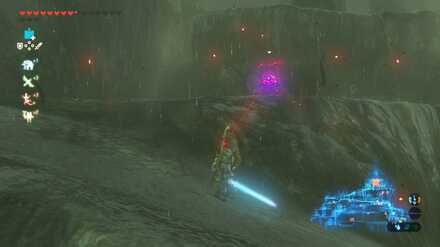 The gate is just on the other side of the Guardian. Lift the gate using Cryonis to enter the Lockup. 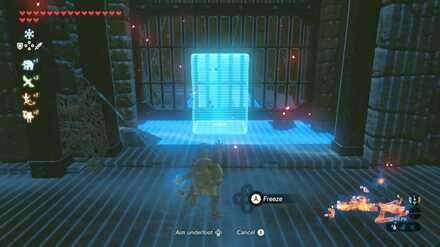 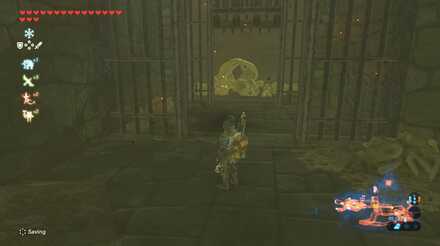 You will encounter different enemies depending on where you're coming from as you make your way to the Lockup, so be prepared!

Entering Through the Lockup Gate 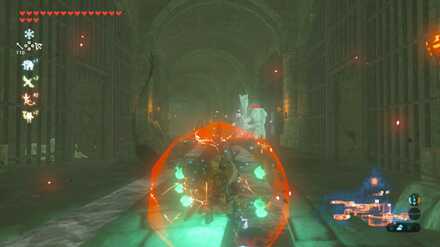 After lifting the gate of from the main Lockup Entrance, you'll find yourself in a hallway full of enemies behind bars. You'll need to destroy the Malice Eye in one of the cells to safely go through the hallway.

Be careful! Once you destroy the Malice, one of the prison bars will open up and release a Silver Moblin.

Alternatively, you can simply run all the way to the end of the hallway and enter the gate where the Stalnox is located.

Entering Through the Cave 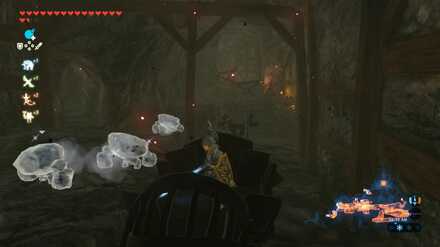 Once you enter the cave, use the stasis on a minecart, then hit it in the forward direction to get it going. You might need to do this twice to get to the end. Look for some cracked walls that can destroy to get to the cells. There will be a glowing eye in the malice on the floor that you will need to shoot to get out of the cell. Once out of the cell, turn left and go forward unitl you find the big room with bones inside. 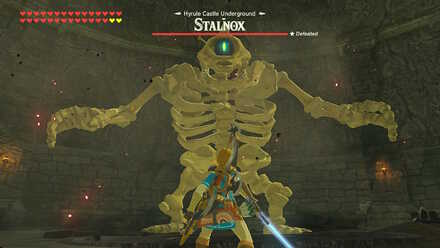 The Stalnox is a skeletal version of the Hinox. Although it looks imposing, it's actually weaker than its living counterparts. 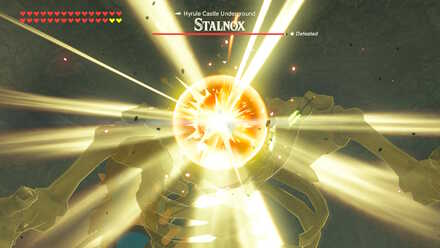 You can shoot its eye with an arrow to stun it and attack it while it's prone. The Master Sword is fully empowered inside Hyrule Castle, so it's your best weapon against it. As its health gets lower, its eye will pop out and you'll need to attack it to defeat it. 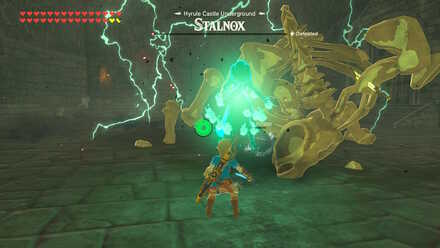 Once the Stalnox is defeated, you will be rewarded with the Hylian Shield - the best shield in the game!

How to Replace the Hylian Shield 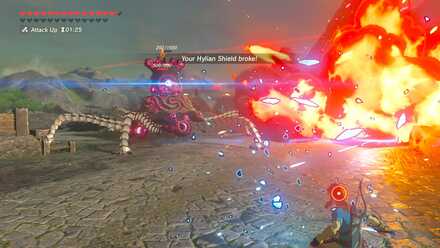 While the Hylian Shield is extremely strong, it is not indestructable. If it breaks, or is lost though, a new one can be purchased in Tarrey Town from Grante.

Grante sells the shield for 3000 Rupees, but he will only show up after completing the Side Quest: From the Ground Up. Note that the Hylian Shield only becomes available for purchase after you have found it in Hyrule Castle. 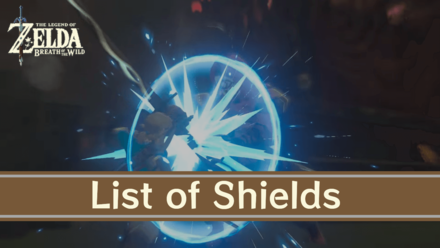 In order for us to make the best articles possible, share your corrections, opinions, and thoughts about 「How to Get the Hylian Shield | Zelda: Breath of the Wild (BotW)」 with us!