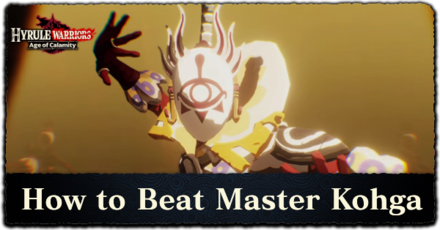 This page is about Master Kohga in Hyrule Warriors: Age of Calamity. Read on to learn about how to beat Master Kohga and which battles you can find them in. 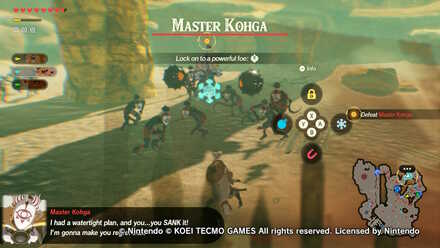 Master Kohga's attack rotation is quite difficult to predict. You'd want to wait for a rune prompt before using the correct rune to stagger him and whittle his weak-point gauge. Once his gauge is depleted, perform a Weak-Point Smash to deal massive damage.

Do the same thing when he duplicates himself, just be more careful. 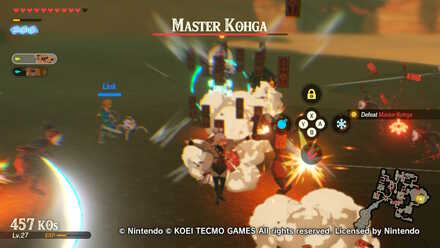 Most of Master Kohga's attacks now have rune prompts, which gives you the opportunity to break a few portions of his weak-point gauge. His other attacks are slow and predictable so you can dodge it easily.

When Kohga is down to about half of his health, Sooga will join the battle with his health also at fifty percent.

Do not lock on either of them so you can see both of their movements. Focus your attacks on Sooga this time as he's faster and more dangerous than Kohga. He will have the same moveset from the previous battles.

Keep on attacking Sooga's weak-point gauge while following the rune prompts and he should be down with one Weak-Point Smash.

Battles that Master Kohga Appears in

Register as a member and get all the information you want. (It's free!)
Login
Opinions about an article or post go here.
Opinions about an article or post
We at Game8 thank you for your support.
In order for us to make the best articles possible, share your corrections, opinions, and thoughts about "Boss Battle Guide: How to Beat Master Kohga" with us!
When reporting a problem, please be as specific as possible in providing details such as what conditions the problem occurred under and what kind of effects it had.