What to Do With Rusty Weapons: How to Unlock Octo-Polish | Hyrule Warriors: Age of Calamity 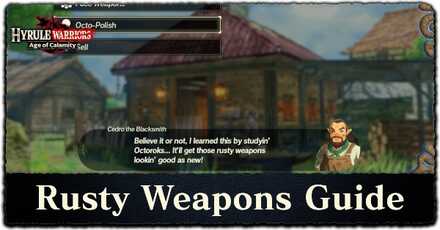 This page will show you what to do with Rusty Weapons in Hyrule Warriors: Age of Calamity. Read on to learn how to de-rust your weapons with Octo-Polish!

What to Do with Rusty Weapons

How to Obtain Rusty Weapons 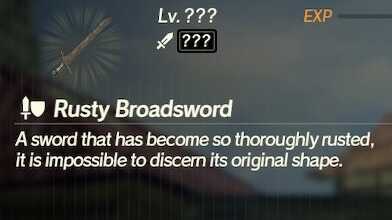 You will sometimes start to acquire rusty weapons around the middle of the campaign. Rusty weapons can be obtained from rewards and chests in battles, but they cannot be used in battle as is, and will show "???" in place of the level and attack damage.

Rusty weapons will always have Rusty in their name, but the icon beside the name determines the type of weapon you'll receive after de-rusting.

To de-rust rusty weapons, you have to first unlock the Hylian Blacksmith Guild. Afterwards, upgrade the Blacksmith by completing the quest, From Rusty to Trusty.

How to Complete From Rusty to Trusty

Use Octo-Polish at the Blacksmith 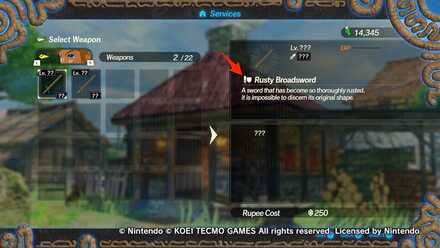 After completing the quest mentioned above, you'll be able to use Octo-Polish at the Blacksmith. Characters holding rusty weapons will appear on the menu, along with the type of weapon each carries.

Choose the rusty weapon that you want to de-rust. Take note of the type of weapon if you are targeting a certain type!

Choose the Materials for De-Rusting 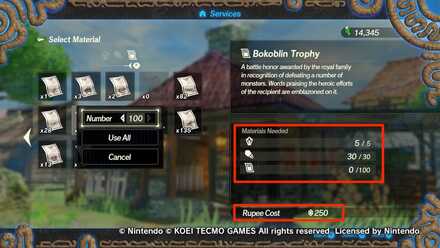 Choose the materials that you will use to de-rust the rusty weapon. It is usually 5 Ores, 30 Monster Parts, and 100 Monster Trophies.

It doesn't matter which materials you use, so we suggest using Flints, Bokoblin parts, and Bokoblin Trophies as they are the easiest materials to farm. 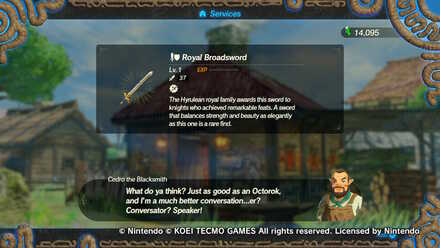 The De-Rusted weapon will appear after paying the de-rusting fee along with the materials. The resulting weapon is fixed for that particular rusted weapon so don't bother soft resetting!

How to Complete Better Rust-Busting

How to Complete Road to Rust Research

Post (0 Comments)
Opinions about an article or post go here.
Opinions about an article or post
We at Game8 thank you for your support.
In order for us to make the best articles possible, share your corrections, opinions, and thoughts about "What to Do With Rusty Weapons: How to Unlock Octo-Polish" with us!
When reporting a problem, please be as specific as possible in providing details such as what conditions the problem occurred under and what kind of effects it had.