The Best Recipes You Need to Cook | Zelda: Breath of the Wild (BotW) 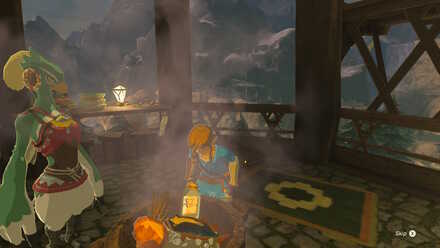 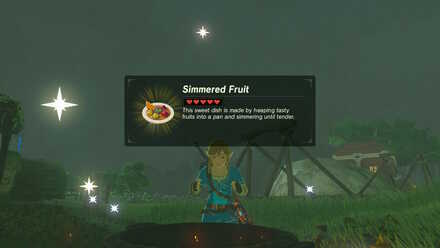 Simmered Fruit is arguably the easiest dish to cook in the early game due to the abundance of apples you'll end up having once you're done with the Great Plateau.

Although you can simply use one apple to cook the dish, it's best to max it out and use five apples. This will create a Simmered Fruit that restores five hearts

You can find apples all throughout Hyrule, with the easiest to farm location being the forest close to the Shrine of Resurrection.

You may also find apples by breaking crates and barrels. 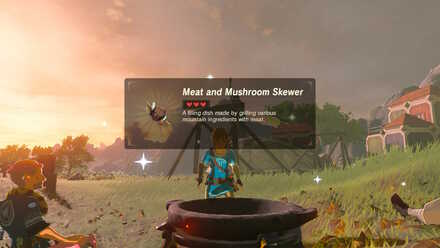 The basic Meat and Mushroom Skewer restores three Heart Containers is another great food item to prepare in the early game. The basic version only requires at least one piece of meat of any kind and Hylian Shrooms.

You can also use different mushrooms to provide certain food buffs. Creating a Meat Skewer with an Ironshroom, for example, will create a Tough Meat and Mushroom Skewer that increases Link's defense temporarily!

As with all meat recipes, higher quality meat will result in more health restored!

Hylian Shrooms are fairly common around Hyrule, with the easiest to farm location being the forest close to the Shrine of Resurrection. You can find the mushrooms growing near the base of trees. 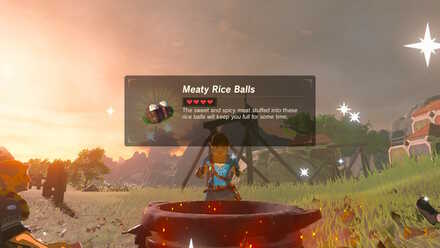 Meaty Rice Balls are another good starting recipe. As with all meat recipes, higher quality meat will result in more health restored!

The earliest you can purchase Hylian Rice is at the East Wind general store in Hateno Village. You may also get it by cutting grass anywhere in the East Necluda region. 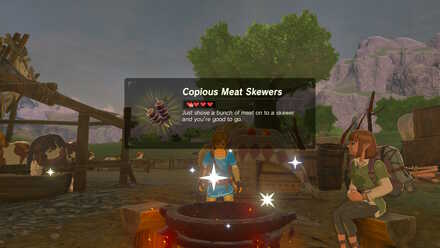 The easiest raw meats to get early in the game include Raw Meat, Raw Bird Drumstick, Raw Whole Bird, and Raw Prime Meat.

Bird Meat and its variants can be farmed from Hawks and Pigeons, both of which are fairly common throughout Hyrule.

Eldin Ostriches are the best bird to hunt for these meat as they have the chance to drop all bird meat variants, including Raw Whole Bird. This requires Link to venture into the hotter regions of Hyrule though. 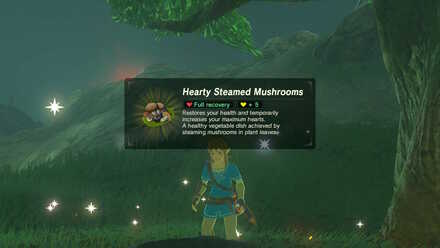 Dishes made with Hearty Ingredients, such as the Hearty Radish or Hearty Blueshell Snail provides full recovery as well as temporary Golden Hearts.

Keep in mind that for this dish, you can only use Hylian Shrooms. Other mushrooms have additional effects that will cancel the Hearty effect!

You can find Hearty Radish in the East Necluda and Hyrule Ridge regions. Beedle also sells at least two Hearty Radishes when you encounter him at the East Akkala Stable.

Hearty Truffles are located in the West Necluda region. The travelling merchants Kanny and Cambo also sell them when it's raining. 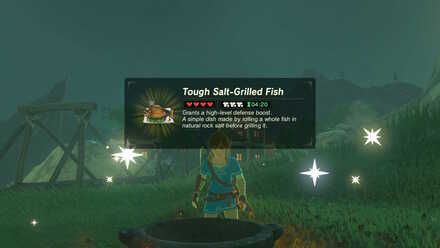 It's also a good idea to stock up on Tough Dishes. especially if you're planning to venture into areas with tougher enemies. These dishes provide Link with a Defense boost that let him endure strong attacks!

The most commonly used Tough Dish for both mid and end game is the Tough Salt-Grilled Fish.

To get the maximum defense boost from this dish, you need two Armored Porgies, two Armoranths, and one Rock Salt.

You can find a large amount of Armoranth growing near Mija's Greaty Fairy Fountain in the Akkala Highlands. You can also find them growing in certain locations on Satori Mountain.

Armored Porgies are saltwater fish and are fairly common in the Necluda Sea near Lurelin Village. You can also find them in the Faron Sea. 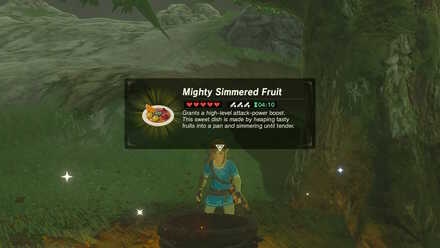 Migthy Dishes are a great buff food that provide Link with a significant attack boost. It's always a good idea to carry these with you in the end game, especially if you're expecting to face resilient enemies such as Lynels.

The most commonly used Mighty Dish for end game is the Mighty Simmered Fruit, which you can make by cooking five Mighty Bananas.

Mighty Bananas can be found growing in Banana Trees which you can find growing throughout Faron Province's tropical forests.

Yiga Clan Footsoldiers and Blademasters also drop them. Seeking these enemeis and defeating them is arguably the best way to farm a lot of Mighty Bananas!

In order for us to make the best articles possible, share your corrections, opinions, and thoughts about 「The Best Recipes You Need to Cook | Zelda: Breath of the Wild (BotW)」 with us!