Types of Weapons: List of All Weapons | Hyrule Warriors: Age of Calamity 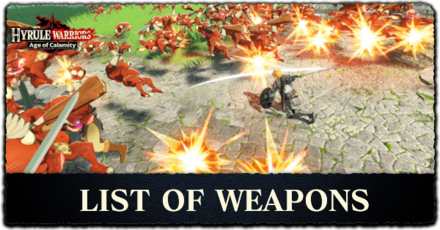 A list of all weapons and types of weapons in Hyrule Warriors: Age of Calamity for the Nintendo Switch. Learn about the weapons of each character, where to find them, stats, and more in the page below.

One-Handed Swords can be wielded by Link and Urbosa, although the type they use will be different, as Link wields normal broadswords, while Urbosa will use Scimitars. Additionally, the character who joins at the end of Chapter 6 uses their own type of one-handed weapon.

Kodachi are a type of Sheikah short sword, wielded only by Impa.

Sheikah Slates are the exclusie weapon of Zelda.

Two-Handed Weapons include greatswords and clubs, which Link can wield, as well as Crushers, the weapon of choice for Daruk. Additionally, the character who joins your party in Chapter 7 will wield a type of two-handed weapon.

Spears have two variants: normal spears and halberds, used by Link, and tridents, used by Mipha, as well as another character who joins your party in Chapter 5.

The unique weapon of the character who joins during the third chapter.

Arm Bands (Bands / Bangles) are wielded by two unlockable characters who can join your party any time from chapter 4.

The unique weapon of the character who joins you in the 5th chapter.

The unique weapon of another character who joins you in the 5th chapter.

There are three characters who wield ancient parts as weapons, with the first two unlocked post-game, and the third which is obtainable as part of the DLC.

Most weapons come with a seal attached to them, which add some kind of bonus to that weapon. The following list shows every type of obtainable weapon skill.

In order for us to make the best articles possible, share your corrections, opinions, and thoughts about 「Types of Weapons: List of All Weapons | Hyrule Warriors: Age of Calamity」 with us!