Weapon Farming Guide: How to Get Weapons Quickly | Hyrule Warriors: Age of Calamity 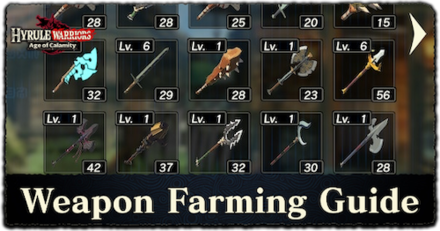 A guide to farming weapons in Hyrule Warriors: Age of Calamity for the Nintendo Switch. Learn the best missions for farming weapons, and how to quickly enhance weapons for your characters!

How to Farm Weapons Quickly

Farming a Weapon to Enhance

By playing battles with a high recommended level, you should be able to pick up weapons that have a high base attack at Lv. 1. You can always remove the seals later on after clearing some quests, so the most important thing is to find a weapon with a high starting damage value. To get your hands on one of these powerful weapons, you should try taking on whatever challenge is available to you with the highest recommended level.

Use the character who you want to farm weapons for

Weapons for All Characters

Farming Weapons for Fusing and Seals

The best way to get many weapons for fusing onto another weapon is to play challenges that have a short clear time. Ideally, you want to take on challenges that can be done in under three minutes.

Do battles with many powerful foes 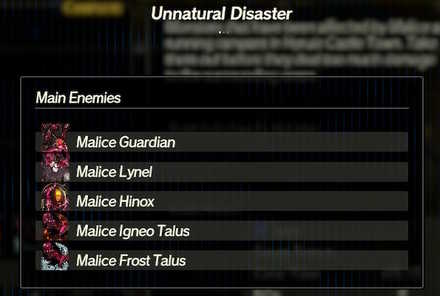 Going into missions with many Powerful Foes (like Moblins, Lynels, and Guardians) is the best way to get many weapons in one go. Smaller foes will rarely drop weapons, so we recommend missions where the goal is to take down powerful key enemies.

Use weapons with seals that improve quality of found weapons

If you're able to find it, there is a seal that actually improves the quality of found weapons. Stacking these seals onto a single weapon is a very efficient way to farm for better weapons!

Use the character whose weapon you want to enhance

Weapons are all exclusive to a single character. Even characters like Link and Mipha, who can both use Spears, cannot fuse weapons with each other. So if you want to enhance a particular character's weapon, you'll need to play through these missions as them!

Register as a member and get all the information you want. (It's free!)
Login
Opinions about an article or post go here.
Opinions about an article or post
We at Game8 thank you for your support.
In order for us to make the best articles possible, share your corrections, opinions, and thoughts about "Weapon Farming Guide: How to Get Weapons Quickly" with us!
When reporting a problem, please be as specific as possible in providing details such as what conditions the problem occurred under and what kind of effects it had.