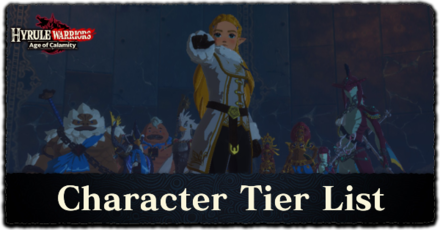 A tier list for the best characters in Hyrule Warriors: Age of Calamity for the Nintendo Switch. The Tier List has been updated to include changes introduced in the Pulse of the Ancients DLC! Read on to see all 19 playable characters ranked, along with their alternate weapon types, as well as their advantages and disadvantages over others!

The Pulse of the Ancients DLC introduced the Battle-Tested Guardian together with new alternate weapon types for Link and Zelda! Here is our updated Tier List and our thoughts on how each character plays.

Note: Characters are ordered within each tier.

Some characters are strong but are difficult to master. Each character's combos and unique abilities should be synergized with each other easily without having to put much effort and extra steps.

Each character's unique ability greatly affects their effectiveness in battle. Their unique abilities should work perfectly well with their combos and on different kinds of situations.

Weak-points are only present on strong enemies and bosses. A good character should also be able to chip away the weak-point gauges of an enemy or groups of strong enemies with the available moveset and ability.

Determines how well the character performs against groups of enemies. This is important for objectives and challenges that requires you to capture outposts or defeat a certain number of enemies within the given period of time.

These mostly refers to a character's effectiveness using basic combos. The best combination of regular and strong attacks should be able to reach and take out as many enemies as possible.

In order for us to make the best articles possible, share your corrections, opinions, and thoughts about 「Best Character Tier List | All 19 Playable Characters Ranked (DLC Characters Included) | Hyrule Warriors: Age of Calamity」 with us!