How to Play Blitzball | FFX

This page teaches the player how to play the mini-game Blitzball from the game Final Fantasy X (FFX , FF 10). Read on to know more about Blitzball, when can it be initiated, and tips when playing.

How to Play Blitzball?

You will be able to play anywhere in the world of Spira after clearing the Events in Luca.

The Left Analog Stick is used to control your player that currently has access to the ball. This is only possible if movement is set to manual.

While in control of the ball, you can choose to pass or shoot with the Square button.

Objectives Of The Game

Shoot The Ball Towards the Goal

Blitzball plays like a football game but deep underwater. You have two options which is shooting and passing. When passing through enemies, you can either Breakthrough, Pass, or Shoot. Below are some mechanics about the minigame.

The Block stat of players will reduce the amount of value a Pass and Shoot has. A pass with 0 value will fumble and go to the nearest player you passed to. A shoot with 0 stat will go follow the same formula for shooting as normal.

When having players block you, you can decide to endure their attack. Their attacks will reduce your endurance and if your endurance falls to 0, then the enemy that attacked you takes a hold of the ball.

The ball also loses its power the longer it passes through water. This means that shooting or passing from a far distance to your target will cause it to weaken. This can make a good shot be blockable or a good pass to fumble. Make sure to shoot as near as you can towards the enemy's goal!

How Do I Add Players To My Team?

Recruit Them With the Square Button 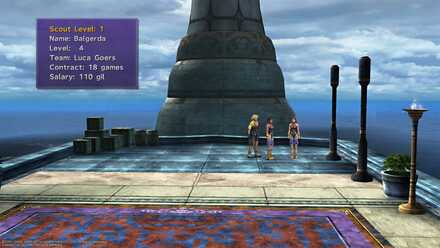 When travelling Spira, you can use the square button to talk with NPCs. If the NPC is recruitable, a dialogue box with the player's contract fee will appear. You may then choose the number of games you would like the player to play for your team.

Register as a member and get all the information you want. (It's free!)
Login
Opinions about an article or post go here.
Opinions about an article or post
We at Game8 thank you for your support.
In order for us to make the best articles possible, share your corrections, opinions, and thoughts about "How to Play Blitzball" with us!
When reporting a problem, please be as specific as possible in providing details such as what conditions the problem occurred under and what kind of effects it had.