How to Beat Humbaba Mistant | FF12

This page contains information about the boss Humbaba Mistant from the game Final Fantasy XII The Zodiac Age (FF XII, FF12). Read on to know more about this boss fight including the boss' moveset and strategies to use against it.

How to beat Humbaba Mistant 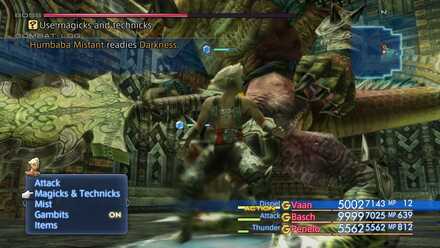 The Humbaba Mistant is one of two bosses which the player's party should fight before getting to the Esper, Chaos. This boss wields a huge sword, and can be found at the Necrohol of Nabudis. Its strength is its primary weapon, increasing once its HP starts to go critical. It is also fond of using combo attacks.

The Humbaba Mistant is fond of using Temblor when the party gets too close to it. It will always cast the spell Protect. It also has access to the Ram attack, on which it charges at the player's party, and the skill Smite of Rage, a bludgeon-type attack. It will also put up Reduce Damage and Attack Charge Time palings at 50% and 40% HP, respectively. 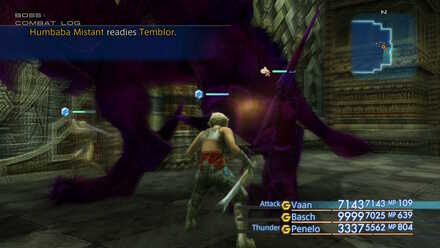 There is no overly complicated way to attack the Humbaba Mistant, but the player's party should have Protect up before entering its lair. The Humbaba Mistant is fond of protective spells, so a simple Dispel should keep the battle on even footing. Keep an eye out for Immobilize and Disable, as its attack could inflict thus.

When it puts up the Reduce Damage paling at 50%, the player's party could choose to go the route of hitting its elemental weakness. It is weakest against the Holy element, so Holy-element weapons and spells are recommended.

f you must go this route, then it is suggested to do the Nihopalaoa trick. With this equipment on—an accessory which can Reverse the effects of curative items—throwing a Remedy at the Humbaba Mistant will open it to a whole world of Sap, Slow, and Silence, statuses which works against it. The battle will go easier this way. The player may also choose to instead use Indigo Pendant when not doing this trick, as the accessory helps a spellcaster's spell take effect 90% of the time.

Register as a member and get all the information you want. (It's free!)
Login
Opinions about an article or post go here.
Opinions about an article or post
We at Game8 thank you for your support.
In order for us to make the best articles possible, share your corrections, opinions, and thoughts about "How to Beat Humbaba Mistant" with us!
When reporting a problem, please be as specific as possible in providing details such as what conditions the problem occurred under and what kind of effects it had.