This page contains information about the boss Hydro from the game Final Fantasy XII The Zodiac Age (FF XII, FF12). Read on to know more about this boss fight including the boss' moveset and strategies to use against it.

How to beat Hydro

The undead dragon, Hydro, can negate your party's Magicks thanks to its Curse skill. Being of the undead class, Hydro is weak to Holy-based spells. Healing spells as well as Holy-based White Magicks are the weakness of this undead boss.

The Uhlan shines in this battle with the weapon Holy Lance. It is wise to have fighters which have Remedy Lore 3 purchased in the License Boards in this battle. Because of the Curse skill, the party should rely heavily on items for recovery. Having a potent stock of X-Potions is a great move.

Out of all Hydro's skills, the move to watch out for is Fearga. This skill reduces the MP of all targets hit by 95%. Hydro can also inflict Immobilize, Disease, Sap, Doom, and Poison, among his other skills. 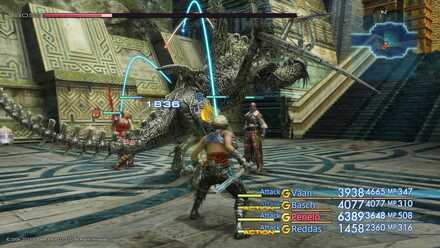 Register as a member and get all the information you want. (It's free!)
Login
Opinions about an article or post go here.
Opinions about an article or post
We at Game8 thank you for your support.
In order for us to make the best articles possible, share your corrections, opinions, and thoughts about "How to Beat Hydro" with us!
When reporting a problem, please be as specific as possible in providing details such as what conditions the problem occurred under and what kind of effects it had.