MultiVersus is a free-to-play crossover fighting game developed by Player First Games and published by Warner Bros. Interactive Entertainment. Choose from a variety of characters within the Warner Bros universe and take part in exciting battles with up to 4 players over various stages. Be sure to check our guides for everything you need to know including the latest game news, characters, tiers lists, and other tips and tricks!

The Open Beta of Multiversus has been released as of July 26, 2022 at 9 AM PT (12 noon EST), although players still seem to be unable to access the game due to maintenance. 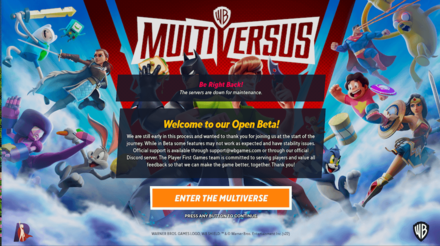 Although the MultiVersus Beta has been released, many players are experiencing issue entering the game and seeing a Be Right Back or Connection Lost screen. This is likely caused by a large number of players queueing for the game at the same time. We'll be sharing details on availability for entering the game in real time on our Server Status page.

Server Status: Are the Servers Down?

Crossplay has been confirmed for Multiversus allowing players to battle against anyone on any console or device that the game is available for.

MultiVersus is a crossover fighting game developed by Player First Games and published by Warner Bros. Interactive Entertainment. The game features various characters within the Warner Bros. universe and is scheduled for a full release in 2022.

Currently, 16 Characters from various franchises in the Warner Bros. universe have been confirmed to be playable in MultiVersus, with more scheduled to be released in the future.

There are currently 10 stages available to play in Multiverses. The motif for each stage is based on a series in the Warner Bros. Universe.

We have made a tier list of all fighters currently available in MultiVersus. See where each fighter is currently ranked, and let us know which one is your favorite!

Each character has alternate Skins available, some of which can be purchased through premium currency, others of which are available exclusively through the Battle Pass.

Each character unlocks perks as they level up. These include offense and defense boosting perks, as well as speciall Signature Perks unique to each character.

Check out our Beginner's Guide for tips and tricks to getting started in MultiVersus!

In order for us to make the best articles possible, share your corrections, opinions, and thoughts about 「MultiVersus」 with us!