An Eye for an Eye Walkthrough, Choices and Best Choice | The Witcher 3 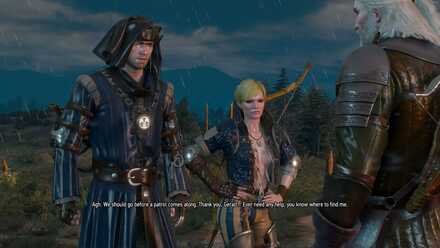 This is a guide to the quest titled An Eye for an Eye from The Witcher 3: Wild Hunt. Read on to learn locations, rewards, best choices, best outcomes, as well as useful tips, strategy for completing this quest, choices and best choice to choose from.

An Eye for an Eye Location and Rewards

How to Unlock An Eye for an Eye

You unlock this quest during the main quest Get Junior after speaking to Radovid at the chess club.

Is An Eye for an Eye Missable or Failable?

This quest will fail after reaching The Isle of Mists or if during the An Eye for an Eye, the player fails to save Ves.

Should I Kill or Spare the Soldier?

At the end of the quest, Geralt can decide whether or not Roche should kill the surviving Nilfgaardian soldier.

Roche lets the soldier go. He proceeds to tell the rest of the ability of the Temerian Guerillas.

Either of the Choices

This choice has no effect or consequence on the gameplay nor the story, letting the player choose whatever they think is appropriate.

An Eye for an Eye Tips and Strategies 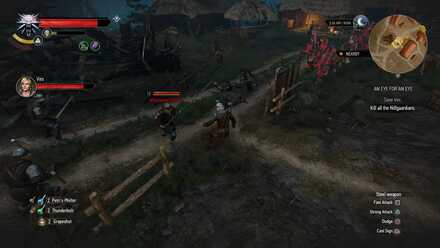 If you have trouble getting to Ves before she dies to the Nilfgaardians, you can call and ride Roach instead of running to her. You can ride past the first 7 soldiers in the way to get to Ves straight away.

Hanged Man's Venom Oil will be usefull for extra damage. Blizzard Potion is also good as there are multiple enemies in a small area, making it easier to chain the effect of the potion.

When fighting the soldiers, focus on the ranged arbalists first. They take less hits to kill and will make it harder for you to fight against the melee soldiers as they will continuesly shoot bolts at you during the fight.

Is An Eye for an Eye Worth It?

An Eye for an Eye is Worth It

Completing this quest will make Roche and Ves available to help in the main quest The Battle for Kaer Morhen. You will also need to complete this quest and the side quests A Deadly Plot and Redania's Most Wanted to be able to unlock the side quest Reason of State. The quest Reason of State will let you decide the outcome of the war and will even let you affect Ciri's ending. 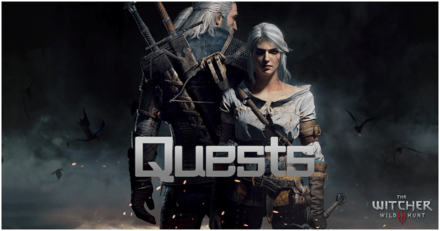 Register as a member and get all the information you want. (It's free!)
Login
Opinions about an article or post go here.
Opinions about an article or post
We at Game8 thank you for your support.
In order for us to make the best articles possible, share your corrections, opinions, and thoughts about "An Eye for an Eye Walkthrough, Choices and Best Choice" with us!
When reporting a problem, please be as specific as possible in providing details such as what conditions the problem occurred under and what kind of effects it had.