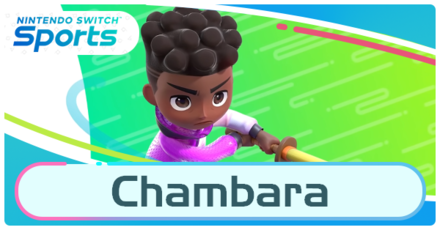 Chambara is a combat sport in Nintendo Switch Sports in which two players strike each other with swords until one of them falls off the platform. Read on to learn Chambara's controls and mechanics, including tips on how to win!

How to Play Chambara

You can earn point bonuses after chambara matches depending on your performance during the game. You can also earn more points if you manage to reach sudden death with your opponent!

Attack and Guard with Your Sword

Perform attacks by swinging the Joy-Con controller and guard yourself from your opponent's strikes by pressing the ZL/ZR button.

Successful attacks will push your opponent near the edge, while successful guards will stun them, giving you time to launch a counterattack!

Waving your sword around randomly results in weak attacks

Button-mashing and randomly waving sword your around is highly discouraged in Chambara, and it will result in weaker attacks. Time your attacks strategically to maintain the proper attack power.

You have three sword options to choose from when playing Chambara.

Charge Sword and Twin Sword may have their own gimmicks, but the simplistic nature of the Sword cannot be underestimated as it has the strongest attacks of all three swords. 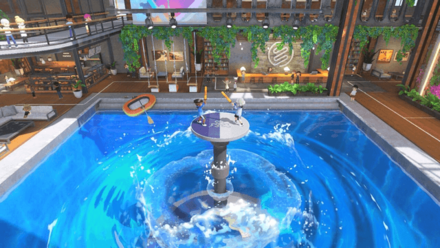 If there is no winner after three rounds due to ties, the game will be decided in a sudden death, where the platform will be significantly smaller.

During sudden death, a player will fall down if they are hit twice.

How to Win in Chambara

Calmly Guard Against Your Opponent

A round in chambara can be ultimately decided on who is the better blocker between the two swordfighters. Hold you guard at all times and constantly adjust your block by watching how your opponent is holding their sword.

Try to always hold the guard button and keep adjusting its stance, as your opponent will always try to adjust their attack to the direction of your guard.

Remember that in order to successfully block an attack, your sword must be perpendicular to the direction of your opponent's attack.

Avoid spamming attacks, as this will make you predictable and your opponent can easily block your next attack, leaving you stunned and vulnerable.

If you have the tendecy to dish out slashes all the time, hold back, keep your guard on, and watch your opponent's movements.

Strike When Opponent is Not Blocking

It is easy to determine if your opponent is blocking or not by looking at their sword. If it is glowing in blue, they are currently blocking.

Watch carefully and take advantage of moments when your opponent drops their guard!

Always aim your attack to be parallel to the direction of your opponent's block to get past through their defenses. If they tend to always block vertically, attack vertically and vice versa.

Observe how your opponent is changing the direction of their block and try to anticipate the perfect chance to launch an attack.

Use a Sword that Suits Your Playstyle

With three different sword to choose from, play against CPUs and determine which sword best fits your playstyle.

Once you're set, take your swordfighting skills online!

You can move sideways by tilting the Joy-Con controllers towards the left or right. This is useful for getting around your opponent or to distance yourself from the edge of the platform. 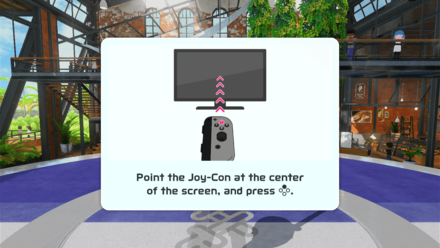 Point the Joy-Con controller towards the Nintendo Switch and press the X Button to reset the gyro controls. This can be useful if your attacks are not slashing in the direction intended.

Keep this in mind if ever the controls are all jumbled, as the gyro controls of the Joy-Con controller will not be fully reliable especially in a sport where you need to wave it all around the air.

If you play chambara online, you can enjoy online matchmaking against random people or battle friends from far away. 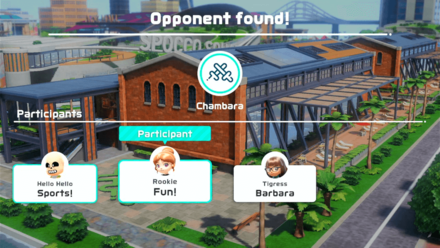 It is possible to enter and find chambara matches when playing online in two player mode.

However, only one player will be allowed to participate in the match even if both players queued up for a game.

In order for us to make the best articles possible, share your corrections, opinions, and thoughts about 「Chambara Controls and Tips | Nintendo Switch Sports」 with us!