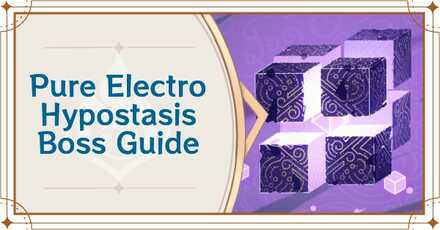 The Pure Electro Hypostasis is an event boss during Hypostatic Symphony Event in Genshin Impact. Find out its attack patterns and the strategy to beat it here!

The Level of the Pure Electro Hypostasis is not affected by the World Level.

After the Pure Electro Hypostasis attacks, there will be a few second that it'll be vulnerable to your attacks. Use this time to deal out as much damage as you can.

Once their HP is below a certain point, 5 small revival prisms and 1 large revival prism will appear. You will need to destroy all of them to defat the Pure Electro Hypostasis.

If you don't destroy them immediately, the Pure Electro Hypostasis will regenerate HP.

Use Elemental Attacks to destroy the prisms

The Revival Prisms are immune to Physical Attack. Make sure to use Elemental Skills or Attacks to damage and destroy it.

Similar to the normal variant, the Electro Hypostasis will turn into a fist and hit in a straight line, a scissor and hit an arc in front of it, and a palm that will slam to the ground.

The area of effect will be shown before each attack connects giving you an idea on where to avoid.

The Electro Hypostasis transfoms into a drill and charges forward. It's fairly easy to move out of the way. There's a chance at the end it'll stop at the end and start shooting slow homing electro balls at you.

After moving towards your character, the Electro Hypostasis will transform into a pair of palms that will slam at each other. 3 slow homing electro balls will spawn after the attack as well.

No difference has been noticed compared to the normal version of this attack pattern. Avoid this attack by moving clockwise as the Electro Hypostasis spins slowly. The cubes on the ground will grow larger as the attack finishes but it can be avoided by dashing in the opposite direction.

If you're not able to escape, you will need to dodge the attacks. The range of the attack can be seen on the ground making them easy to avoid. You can wait for the attack to expire or break one of the pillars to end it quicker.

Register as a member and get all the information you want. (It's free!)
Login
Opinions about an article or post go here.
Opinions about an article or post
We at Game8 thank you for your support.
In order for us to make the best articles possible, share your corrections, opinions, and thoughts about "How to Defeat Pure Electro Hypostasis | Hypostatic Symphony Challenge Guide" with us!
When reporting a problem, please be as specific as possible in providing details such as what conditions the problem occurred under and what kind of effects it had.