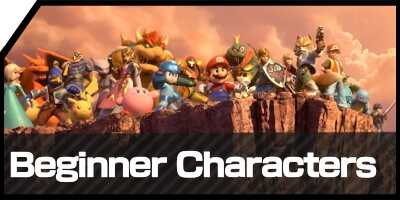 This is a guide to the best beginner friendly characters to use in Super Smash Bros Ultimate (SSBU) for the Nintendo Switch. Here we will introduce 5 easy characters for new players of Smash Ultimate, who can help you master the fundamentals of the game.

These are the most important things to consider for a beginner character. Characters with a simple neutral game, good damage and KO power, as well as a good recovery are things to keep in mind when choosing an easy character.

Lucina has high range, decent speed, good weight, and several moves that can be used in many situation. This makes her one of the best beginner friendly characters in the game. When playing as Lucina, keep your distance in mind and utilize your range to attack enemies while preventing them from hitting you.

Beware when trying to KO enemies out of stage as you can only perform a single strike. Going further than that will make recovery extremely hard, but she has a lot of decent tools that are easy to use, which makes her one of the best characters to use for players that are just beginning their journey in Smash.

Lucina Matchup Chart and Combo Guide | How to Counter Lucina

Dark Pit has several jumps and a good Up special for recovering back to stage. He can also punish projectiles using his down special and even moves with huge lag with his swift attacks.

His Side Special and Smash attacks are powerful moves for KOing, so after racking up enough damage on an opponent, go for one of these to finish them off!

Pit Is A Great Alternative

While Pit's arrows deal less damage, they can be controlled more freely than Dark Pit's arrows. It is more important for Pit to land his combos and smash attacks as his side special is weaker than Dark Pit, which can make knocking out enemies harder.

Bowser is another great beginner friendly character. He is a super heavy character which makes knocking him out harder than other fighters. Nearly every one of his attacks are capable of KOing, so he is especially great if you just want to win among your friends. His down special can also break shields easily which can teach a player how to fight against defensive enemies.

While many players may not be shielding a lot in lower levels of Smash, Bowser's side special will allow him to grab a shielding for and inflict a ton of damage, even KOing at higher percents. He will struggle against characters who are better at comboing, but in the early levels of Smash Bros, this won't be a huge problem.

Palutena is not only one of the best characters in the game, but she is one of the easiest to use. Every one of her attacks has some utility, and she has projectiles, a reflector, and a great recovery at her disposal. She even has a massive grab, and can KO opponents with a back throw.

The trick to using Palutena is making use of her powerful aerial attacks to rack up damage, then using a projectile on an offstage foe, or Up Smash on a recovering foe to finish them off. Palutena has very few weaknesses, and the ones she does have are hard to expose at low levels of play.

Palutena Matchup Chart and Combo Guide | How to Beat Palutena

Since Samus is a character that relies on projectiles, this character lessens the players need to perform risky moves and allows them to play from afar. Samus can also perform several recovery options like her ability to grab the ledge, her up special, and even her down special since it can change your landing timing due to the slight pause it causes to Samus while she's in the air.

Dark Samus is Samus' echo fighter. Dark Samus, similar to Pit and Dark Pit, has her own advantages and disadvantages when compared to Samus. Below, we'll breakdown on which traits each character has over the other.

In order for us to make the best articles possible, share your corrections, opinions, and thoughts about 「Best Characters For Beginners | Super Smash Bros. Ultimate (SSBU)」 with us!