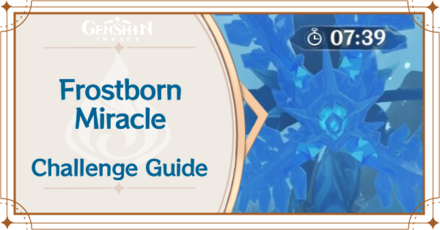 The Resurgent Cryo Regisvine is an event boss during The Chalk Prince and the Dragon Event in Genshin Impact. Find out its attack patterns and the strategy to beat it here!

The Frostborn Miracle can be challenged solo or in co-op. It is recommended to do the challenge in co-op as it will make taking down the Cryo Regisvine easier.

When doing the challenge, it might be easier to go to co-op with a lower world level player and do it in their world instead, so that the enemies will be weaker. The amount of rewards you get depend on each player's world level, so there's no downside in doing so.

Similar to the last two event challenges, the Frostborn Miracle does not need any resin to participate or to claim the rewards.

In order to get all the items in the third Event Shop, you will need a total of 3,080 Miraculous Essence.

At the beginning of the challenge, the Cryo Regisvine is protected by a shield. You will need to destroy 3 Frost Thorns to bring the shied down.

The Cryo Slimes that spawn around the area will drop a Scarlet Quartz upon death.

Break Seeds of Winter to create a shield

Seeds of Winter will spawn near the Ruin Braziers whenever the Resurgent Cryo Regisvine will let out a powerful attack. Break the Seeds of Winter and stay inside the shield it makes to avoid damage.

During the attack, icicles will fall from above. Make sure to keep moving during this attack and to avoid the icicles because they explode after a period of time.

Performs a laser attack from two directions on your character, in addition to attacking up to 2 times in a row. You can avoid it using a dash at the right time.

The Resurgent Cryo Regisvine will slam its head then spin, hitting anyone close by. Stay away when it starts to do this to avoid the damage.

Three icicle burst attacks will explode in your direction during this pattern, dash in between the rows so you don't get hit. 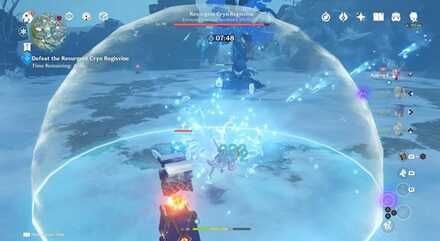 An attack that shoots multiple icicles when you are farther away from the Resurgent Cryo Regisvine. Jumping or dashing at the last second will save you from damage.

An ultra-wide-range explosive attack performed only by the Resurgent Cryo Regisvine. This attack pattern can be repeated up to 3 times in a row.

During this time, be sure to break the Seeds of Winter and stay inside the shield to negate the damage.

Register as a member and get all the information you want. (It's free!)
Login
Opinions about an article or post go here.
Opinions about an article or post
We at Game8 thank you for your support.
In order for us to make the best articles possible, share your corrections, opinions, and thoughts about "Frostborn Miracle Challenge Guide | How to Beat the Resurgent Cryo Regisvine" with us!
When reporting a problem, please be as specific as possible in providing details such as what conditions the problem occurred under and what kind of effects it had.