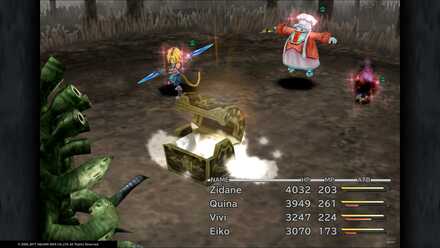 This is a guide about the Steal command in Final Fantasy IX (FFIX, FF9). This page contains information about tips for stealing items and equipment from enemies. We will also discuss the best way to steal from enemies as well as the benefits of stealing.

Use the Steal Command

Stealing a Robe of Lords from Hades.


Stealing is an option in the game that can pay off tremendously in the long run. Stealing allows you to steal items, equipments, and with the proper ability equipped, Gil from enemies. As the main character of Final Fantasy IX is a thief, every enemy and boss carries a set of two to three items or equipment that can be stolen. Once their supply has been exhausted, they can no longer be stolen from.

How to Steal Effectively 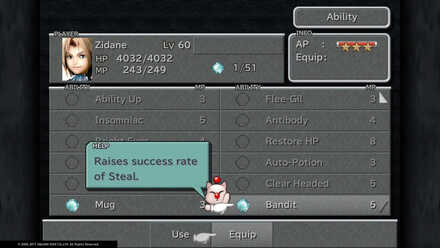 Zidane has a plethora of Steal enhancing abilities like Mug, Master Thief, and Bandit among others. These abilities provide bonus effects and can increase your steal rate.

Boss fights only come once and these bosses may carry items that are unobtainable until later in the game or cannot be obtained again. Some bosses are tough, though, and it may be difficult to steal every item they posess, so choose your actions wisely.

To Improve Your Thievery Ability

Zidane has an ability called Thievery that increases its damage every time you successfully steal. This skill is not accessible until later in the game, so try and steal as much as you can to max out its damage sooner rather than later!

Register as a member and get all the information you want. (It's free!)
Login
Opinions about an article or post go here.
Opinions about an article or post
We at Game8 thank you for your support.
In order for us to make the best articles possible, share your corrections, opinions, and thoughts about "How to Steal" with us!
When reporting a problem, please be as specific as possible in providing details such as what conditions the problem occurred under and what kind of effects it had.