This page contains information on the card game Tetra Master from Final Fantasy IX (FFIX, FF9). Read on to learn more about the rules of the game and how to read the cards!

Tetra Master is played on a 4 by 4 grid with each player placing a card in each square. The catch, however, is that in each match squares on the board will be blocked off at random, forcing the player to make their choices wisely with each game. 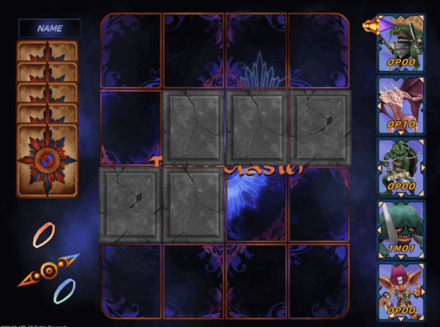 An example of a Tetra Master game board.

The goal of the game is to use the cards in your posession to take over your opponent's cards. Players select 5 cards from their collection, followed by a coin toss, and take turns placing them on the game board in an attempt to capture as many cards as possible. Cards in your posession are blue, while cards taken over by your opponent will turn red. When a card has been placed in each square, the player with the most cards wins. The winner then gets to select a card from their opponent's hand that they were in posession of at the end of the match. For example, if you win a game of Tetra Master and took control of 3 out of 5 of your opponent's hand, you would not be able to claim a card from the remaining 2 that you did not capture.

How to Read the Cards

To better understand exactly how to win a game of Tetra Master, knowing what the symbols, letters, and numbers on each card mean is vital. The following will give you a rundown of what each stands for. 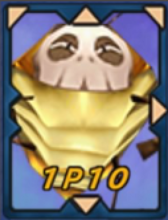 Each card has a random assortment of arrows that are used in capturing your opponent's cards. If the card you place does not have an arrow in the direction of another card then nothing will happen. When a card is placed with one of its arrows directed at an opponent's card, their card will be captured without resistance. However, if your card's arrow is pointed at your opponent's card's arrow, a card battle will ensue, leaving the stronger of the two cards the victor.

The second digit represents the card's attack type. There are four different attack types listed in the table below:

Aside from the card type, as stated above each other stat is based on a hexidecimal value with a degree of randomness. When a card attacks, its attack power is decided by the number range (listed below) and the associated range. When a card defends, the same happens with its physical or magical defense depending on the incoming attack type. Whether the card is captured or not is left up to a game of chance as the values decided in the end are randomly generated based on all of these values. To this end, choose cards with higher values for a higher chance of success!

Putting it All Together

Knowing all of this, we can roughly gauge the strength of any card. As an example, we'll figure out about how strong the Oglop card posted above is. With a value of 1P10, we can see that its attack power is incredibly low with an HP value of 16-31. The P tells us that this slippery creature is a physical attacker and the final 2 digits tell us it has a physical defense of 1 and magic defense of 0. This is not a card you want in your hand! Many other stronger cards exist within the game, so get out there and find them!

Inside your card menu you may have noticed something called Collector Lv. Increasing your collector level requires points calculated by the cards you obtain throughout the course of the game and a few other factors that will be listed below.

How to Get Points

Each card provides a number of points based on its uniqueness, its arrow pattern, and its attack type.

Based on the table above, you will need to evolve all of your cards to A type, collect every unique card, and each card must have a different pattern of arrows to reach the highest collector level. X type cards give points as well, but not enough to reach the highest level.

Gather as many unique cards as you can and become the greatest Tetra Master collector ever!

Register as a member and get all the information you want. (It's free!)
Login
Opinions about an article or post go here.
Opinions about an article or post
We at Game8 thank you for your support.
In order for us to make the best articles possible, share your corrections, opinions, and thoughts about "Tetra Master Rules and Basics" with us!
When reporting a problem, please be as specific as possible in providing details such as what conditions the problem occurred under and what kind of effects it had.