This page will show you all about Max, a character in Brawl Stars. Read on to learn this character's information and stats, attacks, gadgets, star powers, skins, and how to use this character!

This page will show you all about Max, a character in Brawl Stars. Read on to learn Max's stats, attacks, gadgets, star powers, skins, best maps, and how to use her!

Max's blaster shoots a bunch of projectiles fast! It holds a lot of rounds, and Max is quick with the reload.

Note: This is the stat of Faster Blaster at Power Level 1.

Max momentarily boosts up her movement speed and that of nearby allies. Gotta go fast!

How to Use Max 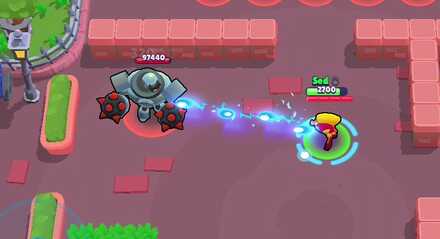 Max has the most attack charges in the game, and it also reloads fast. Always attack enemies even if they're not hitting them to keep them away from you and your team. It would also make them hesitate to attack head-on and will give you more chance to get or control the area near the objectives.

Give speed boost to allies 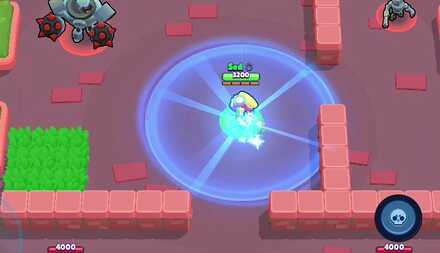 Make sure to use Max's Super when all allies are in range. It will give them speed boosts, which can help your team get or escape from your enemies faster. Also, having a quick movement speed in a battle will give your team a tremendous advantage, so make sure to include your teammates when using her Super! 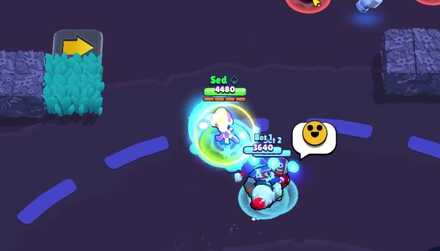 Increase Max's mobility by getting at least one of her Gadgets. Her Phase Shifter gadget is good for rushing in on opponents, as it makes her dash towards them while being immune to attacks. You can also use this to escape from your enemies safely. Same with the Phase Shifter, her other Gadget, the Sneaky Sneakers, is also an excellent item for pushing in on opponents. This Gadget lets her teleport back to where she activated it after 3 seconds and recovering all the health she lost during the duration.

You can benefit more from Max's very fast movement when you got her Star Powers. Pick the Super Charged Star Power if you want your Super to get charge as you move, but if you desire to increase your reloading speed instead, you can get her Run N Gun Star Power. The Super Charged Star Power can benefit both her and her team, while the Run N Gun only gives an advantage to her. Choose any of them that suits your playstyle to increase your chances of winning a match.

In order for us to make the best articles possible, share your corrections, opinions, and thoughts about 「Max Stats, Skills, and Skins | Brawl Stars」 with us!