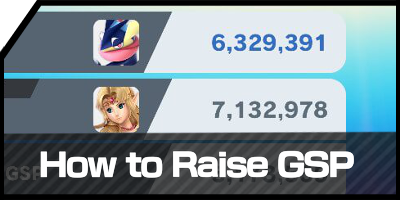 How to Increase GSP

When playing Quickplay, your GSP goes up when you win matches and goes down when you lose matches. Aim for a win rate of 50% or more to get a decent GSP rank. The first couple of matches you play are crucial as the GSP has a lot more weight as compared to the later matches you play when you have a lot of matches in that character. This is because the GSP depends on the win/loss in relation to your total amount of matches.

GSP Does Not Go Up In Arenas or With Two People

If you do select the option to play private arena matches, or quickplay with two people, your GSP will not rise. It will only rise for solo games played on matchmaking (Quickplay).

Your GSP rises when you complete classic mode with a high score. You can get the highest possible score by setting your difficulty to high and making sure you don't lose, but be warned, this is harder than it sounds. If you lose midway through, use tickets to continue without lowering your total score!

Playing Mob Smash increases your GSP depending on the number of combatants you eliminate. There are three types of Mob Smash: Century Smash, wherein you fight 100 enemies comprised mostly of Miis, All-Star Smash, where you fight every member of the roster, and Cruel Smash, the hardest of them all.

All Three are Independent From Each Other

Each of the Mob Smash modes have their own score independent from each other, so make sure to practice each of them so that you can master each and get the highest score.

Having a high GSP will allow you to access Elite Smashes, which is essentially matchmaking mode that is locked away past certain GSP, so these players are usually high GSP as well. This is the cream of the crop for Smash Online, and this is where you will find the most challenge.

An Indicator of Smash Skill

GSP is an indicator of your skill in respect to other Smash players. If you connect and play actively, you will be able to see how many people have lower scores than you.

To see your GSP, you must be subscribed to Nintendo Online. Once you connect, you will be able to view your GSP if you're connected to the internet.

Your GSP dictates who you will fight against in matchmaking matches, generally those around the same GSP so you have similar skill levels.

Individual GSP For Each Mode

Each mode has their own unique GSP, meaning your GSP for online smash is different from your GSP for Classic Mode. These are the three modes that have their own GSP.

In order for us to make the best articles possible, share your corrections, opinions, and thoughts about 「How to Raise Your GSP Fast | Super Smash Bros. Ultimate (SSBU)」 with us!