How to Beat Tiamat | FF9

This is a walkthrough for the boss fight Tiamat from the game Final Fantasy IX (FF9, FF IX). Read on for tips and strategy about how to beat Tiamat, including Tiamat's stats and other useful information. 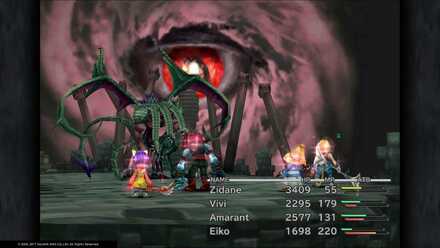 Beware of using Float as Tiamat will counter with Snort against characters that attack it while floating. Tiamat can also inflict Heat so be prepared.

Tiamat's deadliest moves are Jet Fire and Snort. Jet Fire can inflict Heat to your whole party while Snort will eject the targeted character out of the battlefield. Snort will only be used as a counter attack against characters with the Float status.

It is wise to silence Tiamat to prevent it from using Float against your characters (not needed if Auto-Reflect is learned by everyone). Go all out at the start of the fight, as prolonging the battle will prove advantageous to Tiamat due to its Absorb abilities. Equipping Wind resistant equipment will also prove useful against Tiamat's Twister attack.

Use Ice based attacks, as Tiamat is weak to Ice elemental attacks. Using Vivi's Blizzaga and Steiner's Magic Sword will damage Tiamat greatly. Shiva is also a good Eidolon to use for this fight.

In order for us to make the best articles possible, share your corrections, opinions, and thoughts about 「How to Beat Tiamat | FF9」 with us!