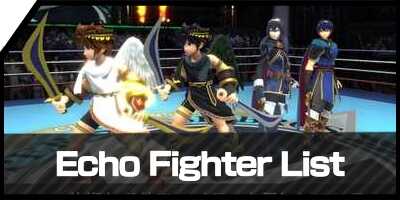 What Are Echo Fighters?

A reskinned character with virtually the same properties

Echo fighters are highly identical to their original counter parts in terms of moves and stats. They aren't just alt costumes however, these echo fighters sometimes have certain differences with their original character, which we will discuss further below.

Unlike Clones (such as Fox/Falco, Ness/Lucas, etc), Echo fighters will retain the same general attributes (movement speed, air speed, etc). Their moveset is usually nearly idential, although there may be small differences in hitboxes, frame data, etc.

Differences Between Each Echo Fighter

Daisy and Peach is a hot debate over the course of Smash History. While there were once very minor differences between the two, they have since been patched out, and they are now the exact same character. The one you should choose is simply a matter of preference.

Marth and Lucina have the exact same moves with no exceptions. What makes Marth different from Lucina however, is their damage output. Marth has a tipper mechanic on his sword, which causes his attacks to deal more damage and more knockback upon hitting enemies with the tip (AKA, the sweet spot). This makes Marth a more difficult character to use than Lucina, whose damage is the same for all moves.

Often times, Marth's tipper mechanic can work against him. Upon using a combo, if marth lands a sweet spot, the enemy may launch further which can cause his combo to fail. This makes Lucina the better character among the two as she can land consistent combos with consistent damage.

Pit and Dark Pit, as echo fighters, are highly identical to each other. They have some few key differences however in their arrows and side special specifically.

Pit's arrows are easier to control, so they are easier to hit opponents with offstage. Pit's side special also launches enemies vertically, which can KO off of the top.

Dark Pit's arrows are harder to control but it travels faster and deal more damage, making them better in neutral. Pit's side special also launches enemies horizontally instead of vertically, which can throw enemies offstage and KO off the side. Due to this, we give the advantage to Dark Pit.

There isn't much difference from the two fighters aside from the element of their Holy Water (Down B). Simon's Holy Water, deals fire damage while Richter's deals aura-based damage. While it is an extremely niche difference, Olimar's Red Pikmin are immune to flame damage, so Richter has a miniscule advantage. Other than that, it mostly comes down to preference.

Roy and Chrom's moves (like all other Fire Emblem characters) are highly similar to each other. What sets these two apart are their sweetspots when using attacks, and their Up Special.

Roy's up special can be moved more horizontally than Chrom, and is a standard rising slash. Chrom's on the other hand, is a combo move that makes him rise and fall in the air. It has decent vertical reach but it cannot move horizontally, making it a far worse recovery option. Roy's attacks deal more damage if the enemy is closer to the sword's hilt, while Chrom's damage stays the same for any distance.

This makes Chrom more consistent in terms of damage, and while they probably differ the most from each other out of all Echo Fighters, they are both useful in different matchups, though we give a slight edge to Roy.

Samus and Dark Samus are highly similar to each other with some few differences. Mainly, their dodge is different from each other. Samus' dodge will cause her to roll into a ball, which is a longer animation than Dark Samus'. This makes catching Samus way easier than Dark Samus. Dark Samus' charged shot also fires lower, which can allow it to hit large enemies on the ledge easier. However, Samus' ability to roll into a ball while jumping makes catching her in the air way harder.

While these differences are mostly just aesthetic, we give the advantage to Dark Samus, so if you are unsure of which to choose, go with them!

The Ryu vs Ken debate has been a hot topic in the Smash Community While they both retain the same specials, their attacks vary greatly. Ryu's command inputs are focused on projectiles like the Shakunetsu, while Ken's inputs are melee oriented. Both are capable of unleashing deadly combos while in close range, and are a force to be reckoned with at the hands of a skilled player.

Overall, we give the edge to Ken, simply due to his powerful Shoryuken move, which is an amazing combo finisher.

Post (1 Comments)
Opinions about an article or post go here.
Opinions about an article or post
We at Game8 thank you for your support.
In order for us to make the best articles possible, share your corrections, opinions, and thoughts about "List of Echo Fighters" with us!
When reporting a problem, please be as specific as possible in providing details such as what conditions the problem occurred under and what kind of effects it had.