How to Beat Necron | FF9 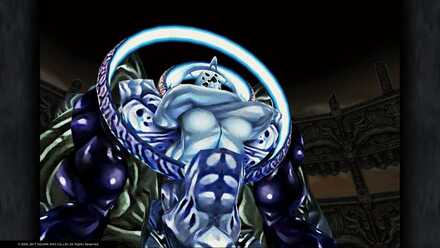 This is a walkthrough for the boss fight Necron from the game Final Fantasy IX (FF9, FF IX). Read on for tips and strategy about how to beat Necron, including Necron's stats and other useful information.

A final boss that has all the movesets worthy of a final boss, capable of taking multiple moves per turn and inflicting several status ailments on the party. Fortunately, Necron only has a measly 50,000 HP, allowing the party to quickly defeat him.

Necron has access to the buffs Shell and Protect as well as Curaga to heal himself. He also has access to tier 3 Black Magic spells, Flare, and Holy.

Neutron Ring massively damages the whole party while Blue Shockwave reduces the target's HP to 1. The most devastating move in Necron's arsenal is Grand Cross which attempts to inflict all status ailments on the entire party. 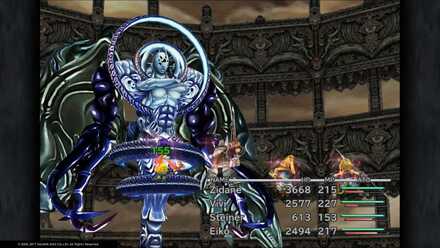 Body Temp, Jelly, Loudmouth (Magic Users), Bright Eyes (Physical Attackers), Antibody, Insomniac, Locomotion, and Clear Headed, as well as Bird Killer and MP Attack are necessary for this fight. Auto-Regen can also aid greatly in surviving Necron's assault while trying to recover from Grand Cross. Do not apply reflect on the party as this will stop Necron from using his weaker Black Magic and focus on using his deadlier moves on the party instead.

Having a White Mage and a character that can apply Auto-Life is recommended for the fight. Have Amarant or Quina apply Aura or Auto-Life to your healer while the 2 other characters deal damage. 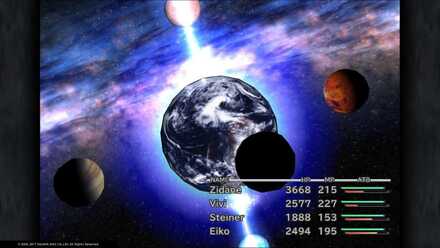 If all the status immunity abilities have been equipped, the only negative ailments you would need watch out for are Berserk, Zombie, Instant Death, and Doom. Below will be your flowchart on what to do for each status ailments:

If your White Mage is afflicted by Zombie, immediately cure it with a Magic Tag. If your attackers are afflicted, check if your other characters need healing. If they do, heal those characters first before removing the Zombie from the afflicted party member.

Let the character die if needed then have two characters use Magic Tag and Revive, Life, or a Phoenix Down on the fallen character.

If the White Mage is afflicted by Berserk, immediately kill her and use a Phoenix Down or Revive on her. If the attackers are affliced and no other allies need healing, cure it. Else, heal your other party members first.

Everytime Grand Cross is used, try not to issue a command immediately for anyone. Wait if someone gets afflicted by Death to be able to issue an immediate Phoenix Down or Life on the character.

Use an Auto-Life ability on the doomed character. Prepare an Elixir or Curaga for the character once the timer hits 0.

Register as a member and get all the information you want. (It's free!)
Login
Opinions about an article or post go here.
Opinions about an article or post
We at Game8 thank you for your support.
In order for us to make the best articles possible, share your corrections, opinions, and thoughts about "How to Beat Necron" with us!
When reporting a problem, please be as specific as possible in providing details such as what conditions the problem occurred under and what kind of effects it had.